The tale starts out with a young woman sitting at a spinning wheel and crying. 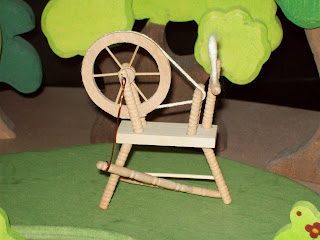 The young woman is crying because she doesn't know how to spin, and her mother insists she start spinning.  The girl knows how to do other things and is always willing to work at other tasks, but her mother wants her to spin.  The mother becomes frustrated at her daughter and begins to yell at her, and call her lazy.

So the young woman is put into a room filled with flax, and a spinning wheel. 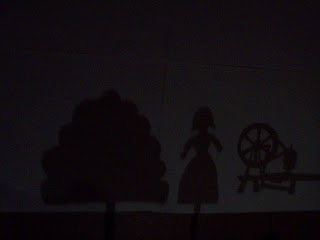 (I found it very difficult to get a great shadow picture, hopefully you can kind of see the shadows.)

Of course, she cannot spin, she doesn't know how, so for three days she sits in the room, and cries.  On the third day the Queen comes to check on her progress, and sees that nothing is spun.  She tells the young woman that she needs to get spinning or she will be punished, but if she gets her work done she can marry the prince.

The young woman really wanted to marry the prince, but what could she do?  So she sat and looked out her window, and cried.  Soon she noticed three strange older women.  One woman had a very large foot, one had a very large lip that hung past her chin, the other had a very large thumb. 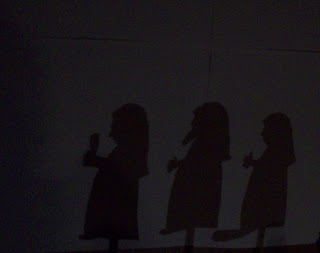 The Queen was very pleased when she came back in the room, and found all the flax had been spun, and the wedding of the Prince and the young woman was planned to take place right away.  The young woman requested that her three kind old "aunts" be invited to sit at her table.  So the three old women where invited to the wedding. 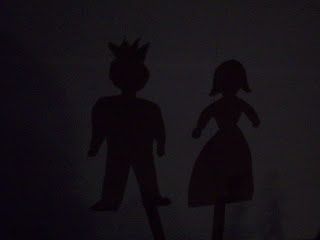 The wedding was lovely, and the Prince and now Princess were very happy.  As they were sitting at their wedding feast the prince noticed the three strange old women. 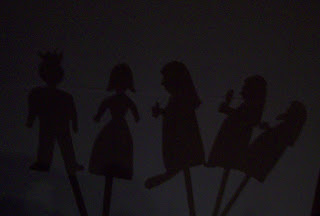 The prince looked at the three old women, and then at his beautiful young bride, and said if this is what spinning does to a woman, that the princess would never spin again.  Of course this was just fine by the princess, and the three kind old women, who loved to spin, were asked to come and live with them at the palace and spin to their hearts' content.  Everyone lived happily ever after.

This story, rather than Rumpelstiltskin, was in my favorite fairy tale book when I was a child, and I loved this fairy tale very much.  I was very unsure what craft to do for this tale, I thought it would be hard to make dolls of the three old women, and my drawing skills are too simple to have done a picture for this tale.  So instead, I thought of shadow puppets, which I had been wanting to experiment with.  I thought these would be the best way to show the large foot, lip, and thumb, as well as the other characters. 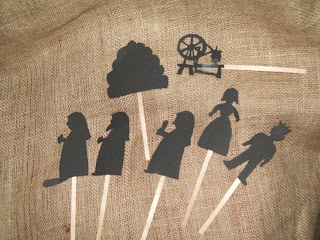 Here is what they look like with the lights on, a much easier picture to take than the shadows, I will have to work on shadow pictures more in the future.  It was fun to have a shadow puppet show, I taught this story to Sarah and Joseph, and I think it would be fun for them to tell their younger cousins next time we visit.

Making these puppets was much easier than I thought, I sketched out very simple images on white paper, then taped them down to black cardstock, and cut them out with a craft knife.  The spinning wheel was too tricky for me to draw, so I found a picture online and shrunk it down and cut it right out the same way.  I had little flat craft sticks that I taped down for the handle.  I hope to make more of these in the future, for different stories.

Also I thought I would share an interesting link to a story I heard earlier this week regarding fairy tales.  In Germany, a historian uncovered in an archive, 500 fairy tales that were collected over 150 years ago.  I look forward to hearing more about these tales in the future.  You can read the article from The Guardian here.

Hope everyone is enjoying their weekend, I have been enjoying the sunny break we have had in the weather the last couple of days, and have been busy in the garden, as well as making progress with my spring cleaning.  Nothing like a little sunshine to get me in the mood for spring cleaning.

Posted by April's Homemaking at 10:55 PM