This week I have chosen the classic Grimm's tale - Rumpelstiltskin. 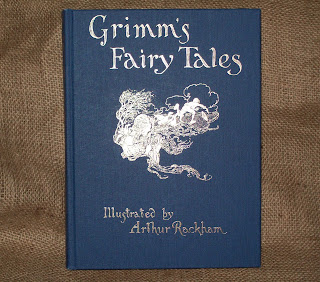 Rumpelstiltskin is an interesting fairy tale, and like most fairy tales, there are multiple versions.  I will include some of the variations in parentheses.

There was once a miller, and in order to impress the king, he boasted that his daughter could spin straw into gold.

The queen spent the first day guessing all the names she could think of, but none of the names were right.  She sent out the servants to find as many unusual names as they could, the second day she guessed again, but still could not guess the little man's name.  Again the servants were sent out to search the countryside for any unusual names they could find.  Late that evening one of the servants came upon a little house in the woods, in front of the house was a strange little man, dancing and singing around a fire.  The servant ducked behind a tree to listen. 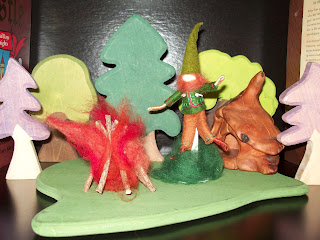 " Today I brew, tomorrow I bake,
And then the little child I will take;
For no one knows my little game
That Rumpelstiltskin in my name! "

The servant went straight back to the queen and told her what he saw.  The next day when the little man came to get the baby, the queen pretended to guess a few more names, the little man said no, and demanded the child.  The queen then asked "Is your name Rumpelstiltskin?"  The little man grew very angry, and demanded to know who told her.  Rumpelstiltskin grew so angry he jumped up and down, over and over again, so hard, that broke a hole in the ground and fell right in, never to be see again. ( In other versions, he runs away in a fit of temper, or flies away on a soup ladle, and I will let you read the Grimm's version which has a little darker ending for Rumpelstiltskin.)  The Queen and her family live happily ever after.

~
The scene in this fairy tale that has always stuck with me the most, is Rumpelstiltskin dancing and singing around the fire in the woods.  So I decide to make a little Rumpelstiltskin doll and set the scene. 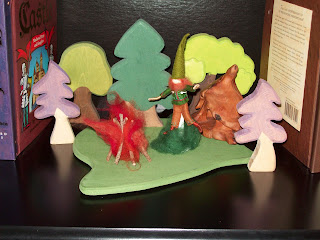 Here is a closer picture of the Rumpelstiltskin doll. 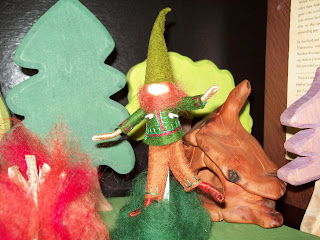 I set the scene with some of wooden trees, and my little gnome home.  The fire is made from cut up twigs and some wool roving.

I am hoping to work with some photos of this scene to make a page for the fairy tale scrap book I started with last week tale - 52 Weeks of Fairy Tales Week # 4 ~ The twelve Dancing Princesses .

I also decided to add to my dollhouse miniatures collection, and placed and order for a miniature spinning wheel, which will come in handy, as the spinning wheel is an important part of another Grimm's Tale called The Three Spinners, which I will be sharing next month.

Instructions for making wire wrapped dolls, as well as some of the patterns for their clothing, can be found in Sally Mavor's Book Felt Wee Folk.

I just found out today, that the author of this book, is coming to Portland, OR. in April to show some of her work and talk about her new children's book, I am looking forward to attending.  I have enjoyed her creations for years.
Hope everyone has an enjoyable weekend!

Posted by April's Homemaking at 11:57 PM