For week four of my 52 Weeks of Fairy Tales Series I have chosen another of my childhood favorites- The Twelve Dancing Princesses. 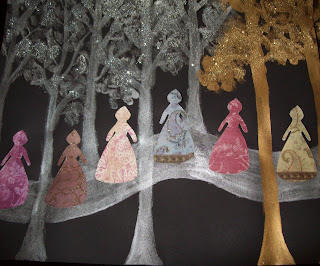 The tale of the Twelve Dancing Princesses is a story about a king who had twelve beautiful daughters.  The king had a mystery to solve, every day he had to replace all of his daughter shoes because they were worn through, and the king could not figure out how the shoes were being worn out.  The king tried locking his daughters in their room every night, and posting guards at the princesses' door.  But, every morning the King would find his daughters' shoes were again worn through.

So the king made a proclamation, anyone who could solve this mystery would marry his choice of the king's daughters and one day inherit the kingdom.  Many princes came from far and wide, and none could solve the mystery.  One day a soldier was returning from war and saw the king's proclamation, so the soldier decided to make his way to the kingdom and try to solve the mystery.  Along the way he met an old women, and because the soldier was friendly to the old woman, she gave the soldier a gift and some advice.  The old woman gave the soldier a magic invisibility cloak, and she told the soldier  not to eat or drink anything that the princesses offered him.  The soldier thanked the old woman and continued to the palace.

When he arrived at the palace he was treated very well, and shown to a room adjoining the princesses' room where he would be able to keep watch. He was given three nights to solve this mystery. That evening one of the princesses brought the soldier a glass of wine mixed with sleeping powder, which is how the princesses had foiled the other men trying to solve the riddle.  The soldier remembered the old woman's advice, and thanked the princess for the drink, then dumped it out when she was not looking.  He then pretended to fall asleep, but secretly kept watch of what the princesses would do.

When the princesses believed that the soldier was asleep, the oldest princess pressed a carved wooden leaf on the end of her bed, at which time, the bed lifted to reveal a secret stairway.  All of the princesses went down the stairs, the soldier, quickly covered himself with his invisibility cloak, and followed the princesses down the stairs.  He was in a hurry and accidentally stepped on the youngest princesses gown, tearing the bottom of her dress.  She looked back but saw no one, her older sisters told her that her dress must have caught on a nail.  Then they all continued on.  The stairway led to an underground path, the path went first through a forest of silver trees, the soldier broke off a branch and tucked it in his cloak.  The youngest princess heard the snap of the twig, but again could see nothing behind her.  Then the path led through a forest of golden trees, again the soldier took a twig.  Lastly the path led through a forest with trees that had diamond leaves, again the soldier took a twig.  The end of the path came to a lake, upon the lake were twelve boats, each with a prince waiting to row the princesses away to a secret underground castle.  The soldier slipped into the boat of the youngest princess, the prince rowing her could not understand why the boat was heavier. 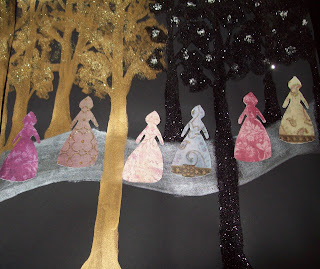 For the next two nights the soldier again followed the princesses to their evening of dancing, on the last night he brought with him the golden goblet that the youngest princess had been drinking from.  The next morning, the king gathered the princesses, and summoned the soldier to see if he had solved the mystery.  The princesses were shocked when the soldier said that he had solved the mystery.  The soldier explained to the king that the princesses danced through their shoes every evening in an underground castle.  The princesses denied this, and the king demanded proof, at which time the soldier brought out the silver twig, golden twig, and diamond twig, as well as the golden goblet.  The king believed his claim, and the soldier was given his reward, he chose to marry the youngest princess because she was the kindest, he would also one day inherit the kingdom.  The king is very glad to have the mystery solved. They all live happily ever after.

There are of course other variations of this tale, as there are with most of the fairy tales, but this is the version I grew up reading.  I love the thought of secret passageways, how fun it would be to have a doorway to an underground kingdom, as a child I loved imagining what the kingdom would look like.

For this week's craft, I decided to do a paper craft, I would love to make 12 dancing princess dolls, but that would take much longer than a week.  Because I am very fond of forests, I decided I wanted to do a craft involving the silver, gold and diamond forests.  I decided I would make a two page picture, for the beginnings of a fairy tale scrapbook.

Here is how it turned out. 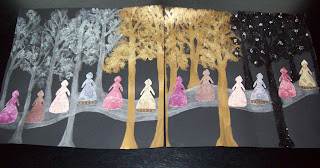 Here it is put into a scrapbook. 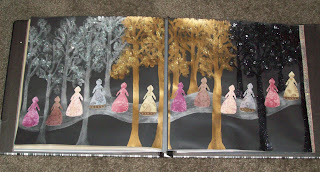 I really enjoyed working with paint for this project, I haven't played with paint in quite some time.  I made a special trip to the craft store on Sunday, on the way home from church, to pick up some very pretty silver and gold paint, as well as a pack of 12 by 12 black cardstock ( I also found 3 pieces of wonderful fabric that I will have to show in a later post).

I also found this little pack of paper which worked perfectly for the twelve princesses, and I'm sure will come in handy for more fairy tale crafts. 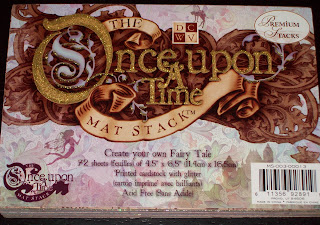 I found a stencil for the princess shape online here, and reduced it down to the size I needed.  Then I traced the figure onto different patterns of paper from the above mat stack, I picked out six patterns and cut two princesses from each one.  First I traced the princess onto the back of the paper, and used a craft knife to cut them out.  After I painted and glittered the silver, and gold forest, and glittered the diamond forest, as well as painting a path, I let the project dry, then glued the princesses along the path. 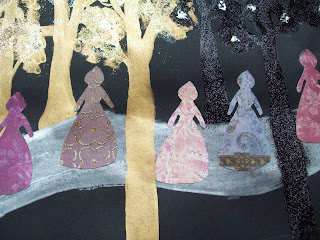 Making  notebooks, scrapbooks, and books is one of my favorite learning tools.  I have made notebooks and mini books with my Sunday school class, and when I home schooled my son in the fourth grade, we made a wonderful Space unit notebook and history notebook.  Notebooks are a fun way to incorporate art into lessons, and very good for hands on and visual learners.  I think it would be wonderful to make a fairy tale notebook with your own art for each story to share with a younger child, and of course it would be wonderful for a child to make their own fairy tale book.

I also made a second project for this story.  After Christmas, my sweet husband, who is used to my funny requests, cut up a whole large storage tote full of twigs from our Christmas tree for me to use for various crafts throughout the year.  Thanks Gary! 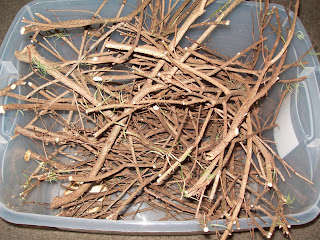 One of the twigs was begging to be turned into a silver branch from the underground silver forest.  Perfect storytelling prop for this story, and a very fun and easy craft for any child.  It was difficult to capture the silver twig in this photo, I first painted the twig with metallic silver paint, after the paint dried, I painted on a thin coat of clear glue and applied some fine silver glitter.  The twig turned out very pretty, and is currently adorning one of my side tables. 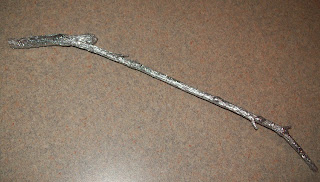 If you would like to read more of the story of The Twelve Dancing Princesses, there are various versions of this story online that you can find through a quick search.  I also have included a link to the story at Amazon below.


Also last week I found a wonderful deal on all twelve of Andrew Lang's Fairy Tale Books, I do not have a kindle or e-reader, and have hesitated buying one because I love paper books so much, then I found out you could download a kindle reader for free to your computer. I thought that that would be a good idea because a lot of older books are free or around a dollar.  Then I saw all 12 of Andrew Lang's Fairy Tale books in e-book format for under a dollar, so I downloaded the kindle to my PC and bought the book.  I was pleased how easy it is to navigate, very handy for reading a multitude of fairy tales.  I still hope to collect the whole set of his books, I currently only have the Blue fairy Book, but for now, this e-book is pretty fun.

I am looking forward to the weekend, and am hoping to get started on some Valentine projects, I see a few bulbs starting to break through the ground in the garden, and am getting very eager for spring.  Hope everyone has a fun and relaxing weekend.