Toady I was in the mood to try a new recipe, I found a very simple recipe called Easy Pound Cake at Cooks.com.  I was intrigued because it was a cake recipe that required no baking powder or soda, and very few simple ingredients.  The Recipe calls for 5 eggs, when I went into my egg drawer in the fridge, I found only 3- yikes! this baker is never down to three eggs.  Anyway, I decided that I would cut the recipe in half, and use my last three eggs to try out the cake.

I creamed the sugar and butter, mixed in the eggs, then the flour, mixed until well blended, and mixed in vanilla.  Then poured the batter into a greased loaf pan.  Baked at 350 F. for 35-40 minutes, until knife inserted in the center comes out clean.

Removed from pan, cool for 15 minutes, then I decided to glaze the cake with lemon glaze. 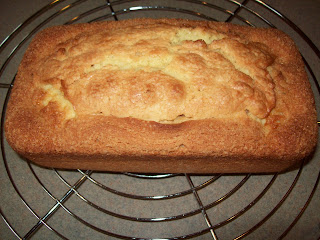 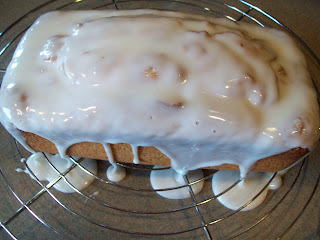 This cake is very good, a nice crust, with a rich moist buttery middle, perfect for an afternoon snack. 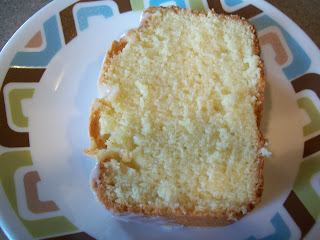 Last week we found a good bargain on chuck roasts, I always wait for roasts to come on sale then I buy a couple, One for the freezer, and one to cook right away.  Usually I use them to make a delicious pot roast meal- you can read my Pot Roast Dinner Post Here.  I had planned on making a pot roast right away with one of the chuck roasts, but different things kept coming up, and I put it off for a couple of days, then the kids were off to youth group, so they wouldn't be here for a big meal, but I knew I had to cook up the roast anyway so it wouldn't spoil.

I decided I would cook up the roast, and turn it into Beef Stroganoff, for the next night when the whole family would be home, and able to enjoy a nice meal.

Here's How I turned an inexpensive Chuck Roast into delicious Beef Stroganoff.

First I browned the roast on all sides, seasoned it with salt and pepper, then I covered the roast with water, and added a chopped onion to the pot, and brought it to a low boil.

While the water was heating up, I cleaned and quartered a package of baby portobello mushrooms, I then added those to the pot roast pot.  Once the water reached a low boil I turned the temperature to medium low and let it simmer on a low boil for the evening, about 3 - 4 hours.

Since I was going to turn the pot roast into stroganoff, when it was done cooking, I packed it away, broth, beef, mushrooms, onions and all into the fridge.

The next day, to prepare dinner, I took the meat from the broth, and sliced it into bite size peices, and set the meat aside.  Then warned up the broth and mushrooms, and onions.  I also started boiling water to cook up a package of wide egg noodles.

To make the sauce for the beef, in another pan, I melted 4 tablespoons of butter, then to the melted butter added 1/3 cup of flour, mix until a paste, and cook on medium high, stirring constantly for about a minute, to that I added the warmed broth/mushroom/onion mixture, and half a cup of milk, and a teaspoon of Worcestershire sauce, and salt and pepper to taste,  and stirred until thickened.  I then added a rounded half cup of sour cream, and all of the sliced beef. Stir until sour cream is incorporated, and warm on medium heat until beef is warmed through.

In the meantime, finish up the egg noodles, then drain.  Serve Beef Stroganoff Mixture on top of noodles.  Here is how it turned out. 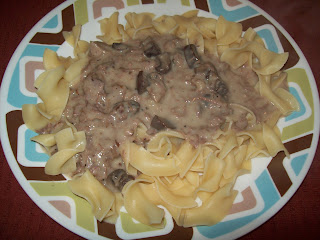 Very tasty, next time, I would add a little parsley for color, and maybe a dash more Worcestershire sauce.  Overall, a wonderful way to cook up inexpensive chuck roast, and  a perfect comfort food meal for all this rainy cold weather we have been having.


Posted by April's Homemaking at 4:15 PM