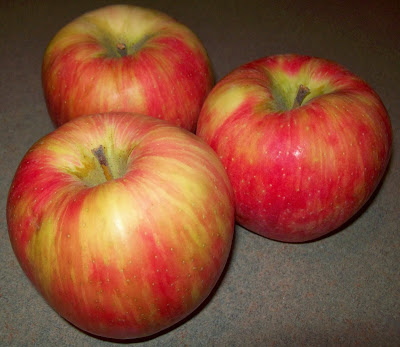 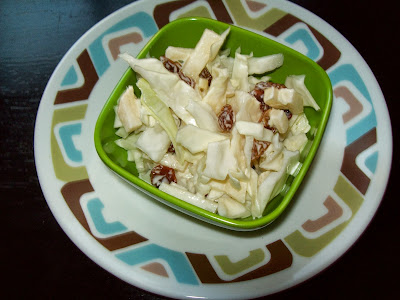 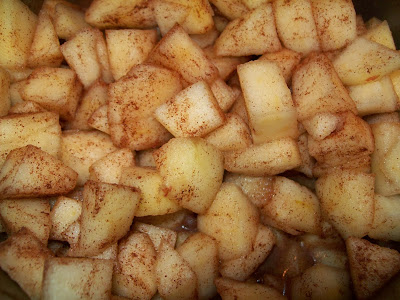 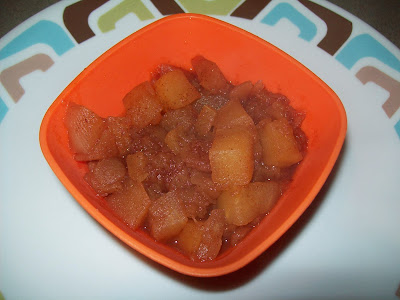 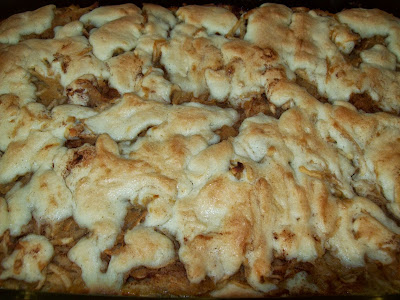 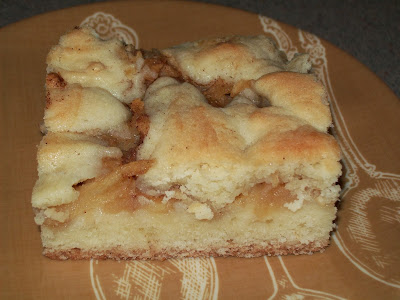 Every year we kick off the fall season with Oktoberfest.  We are lucky to live only a short drive away from the town of Mt. Angel that hosts a wonderful Oktoberfest every year.

We always have fun walking around Mt. Angel. In the center of the festivities is Die Fruchtsaule, a harvest monument that is a symbol of the bountiful harvest and is a beautiful piece of folk art created from all sorts of different grains, dried legumes, and produce. 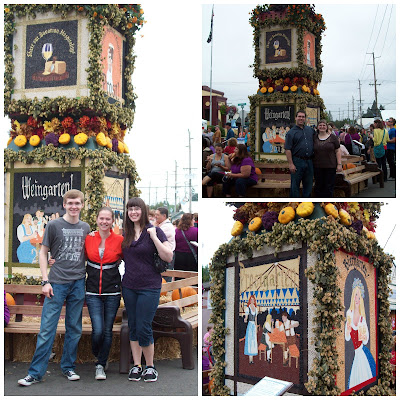 The we made our way to the bandstand area, where we enjoyed hearing tradition folk music and some yodeling.  There was also Bavarian style dancing which was pretty entertaining, some of the local school groups had put together some fun dance routines. 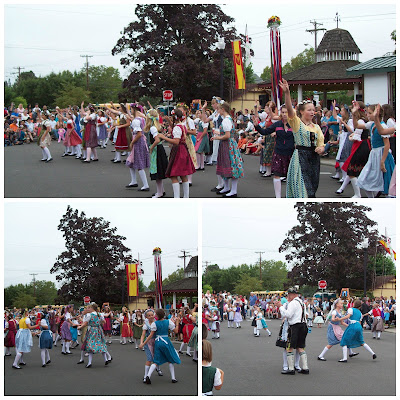 I am typically on the other side of the festival area most years around noon, watching the dachshund races, but this year we were there in time for the May Pole Dance which occurs every day of the festival at noon, what a fun dance to watch as the ribbon is braided around the pole. 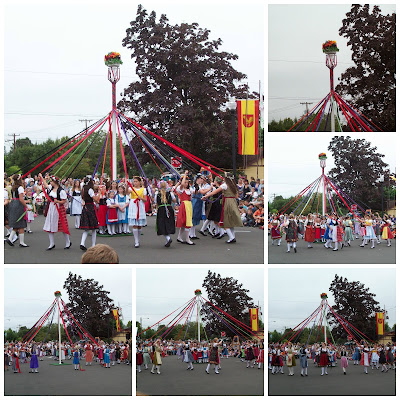 After the May Pole dance we hurried over to St. Mary's church, the church hosts traditional music concerts throughout the festival.  This year we attended the Salzburger Echo Alpine Horn performance.  The church itself is quite a beautiful building, full of beautiful architectural detail and stunning stained glass.  The Alpine Horn concert was fun, the band members were funny and entertaining and spent some time teaching about the Alpine Horns. 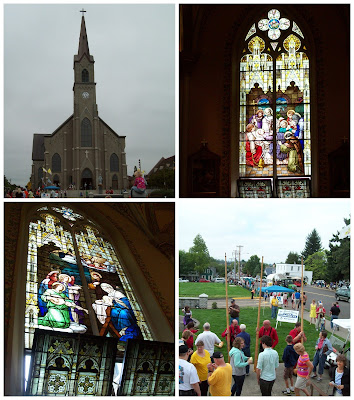 We saw some very cute dachshunds. Like this one! 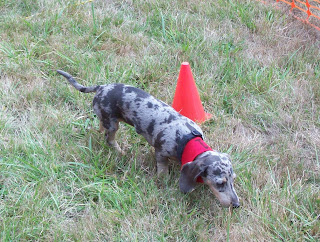 Ate some delicious food, like this local made bratwurst from the Mt. Angel Sausage Co., which was wonderful! 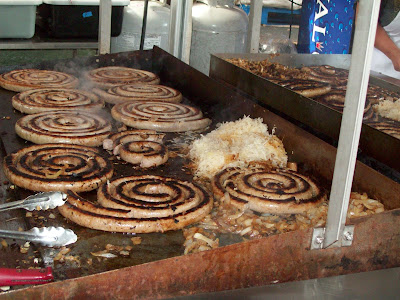 This year we went with Joe's girlfriend as well, here the kids were having fun trying on mini hats at one of the booths. All around it was a very fun day!

Every year, on the way home from Oktoberfest, I stop in at a local farm stand to see if the honey crisp apples are in yet, and Gary likes to stock up on corn.  This year the different varieties of squash were begging for a photo. 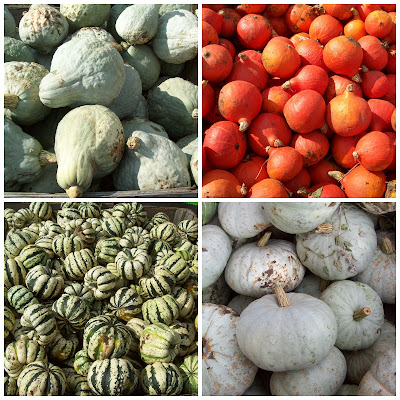 Just a couple more days until fall is officially here, I am looking forward to the crisp fall air, and all of the rich colors of the season.

We are in full back to school mode around here.  Last week school started, we started the week with some delicious home-made cookies to welcome home Joe from his first day back to school. I made a batch of my Molasses cookies, and the house smelled delicious.  I normally make my Molasses cookies in December for the Christmas season, so when Joe came home he asked why I was making Christmas cookies.  After tasting a few though, Joe and Sarah said I should make them every week. They are a yummy, easy cookie to make, so although I won't be indulging every week, I will have to make our Molasses Cookies a little more often. 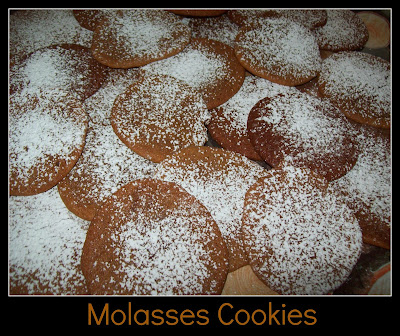 Happy Back to School Week Joe! 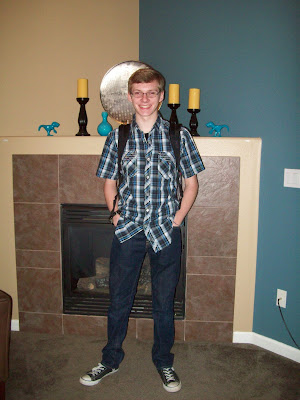 Friday night we enjoyed the first home football game, the weather, which had been rainy, cleared up, and it was a great evening for a high school football game.  Our team won the game with quite a few exciting touchdowns. 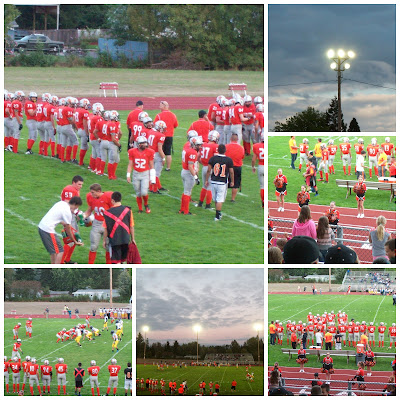 This week the weather turned from cooler, back to school weather, to record breaking highs, we often have very hot Septembers here in Oregon, not very conducive to all the fall baking and cooking I am itching to get going on, but next weeks weather looks like our pre-fall weather may return. Time to break out the soup pot, and baking pans!

Hope everyone is having a nice mid September!
Posted by April's Homemaking at 4:31 PM 3 comments:

For the past two weeks the star of our garden has been the pepper patch.  Both the bell pepper and the jalapeno pepper plants are loaded.   The zucchini plants are starting to slow down, but there are still a few to be picked. 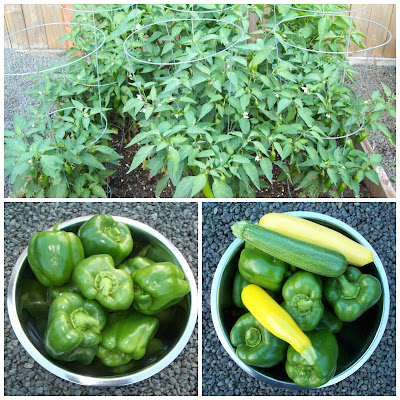 We also had a surprise pepper plant this year, I bought a six pack of jalapenos and another pepper variety must have found its way into the mix.  I am not quite sure what the variety is, I'm thinking maybe Anaheim chili peppers.  I am quite glad for the mistake, we have been enjoying them with our eggs at breakfast, sauteed in a little butter, they have a little bite, but overall are pretty mild.  I hope to find the same variety next year, any pepper growers out there recognize what this variety might be? 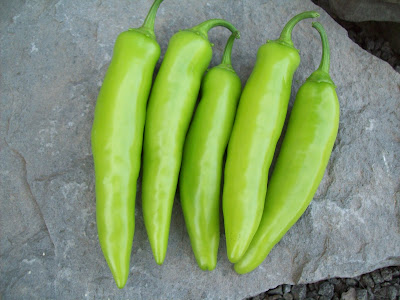 Last week instead of our classic recipe for stuffed bell peppers, I decided to switch up the stuffing a bit, and came up with a yummy new recipe using barley instead of rice, and sausage instead of hamburger. 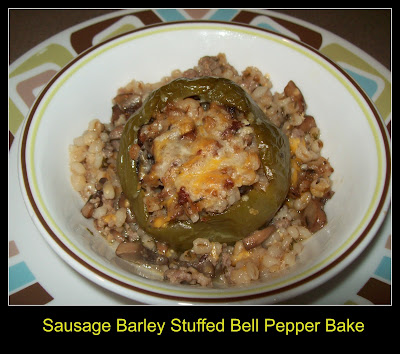 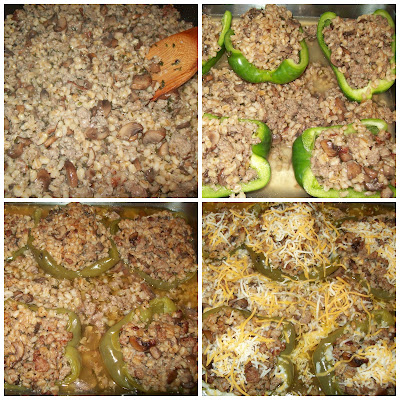 In a large skillet, saute mushrooms seasoned with a few dashes of Italian seasoning and salt and pepper, in a little olive oil until they start to cook through and shrink down, then add the sausage and cook until cooked through and browned.  If there is an excess of fat drain it from pan, then add 3 cups cooked barley to the sausage mushroom mixture, and 1 can of chicken broth.  Bring this mixture to a simmer, and cook, stirring often,  until most of the chicken broth has reduced.

Meanwhile, wash peppers, and either cut them in half lengthwise or cut out the top (depending on pepper size, I cut extra large ones in half and lay them on their sides, and remove the tops of the smaller peppers and stuff them upright) clean out seeds and core.  Set peppers in a large baking pan.  When filling is ready, fill each pepper with mixture, then spoon the rest of the mixture around the peppers in the baking pan, then add 1 can of chicken broth to the pan around the peppers.  Cover with foil and bake at 375 F. for about 45 minutes to an hour, until peppers have softened.  Then remove foil sprinkle cheese over the top of peppers, and return to oven for 5-10 minutes until cheese is melted.

This was a delicious dinner, the whole family enjoyed it.  I love using veggies fresh from the garden in my cooking, this recipes will definitely be on the list during pepper season!

Fall is definitely in the air.  My little corn stalk is starting to grow us a tiny ear of corn. 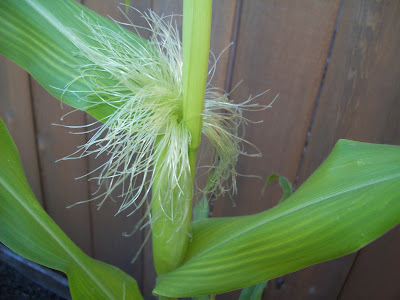 The Hydrangea flowers are turning a beautiful purple blue color. 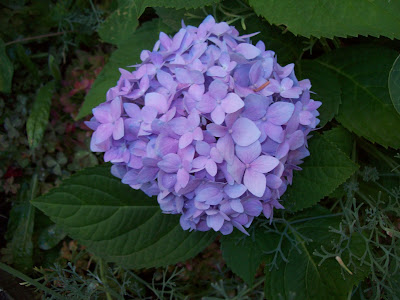 Last week, when I was on a walk with my niece and nephew, we spotted these beautiful little acorns. Acorns always make me think of fall.  I always look forward to this time of year. :) 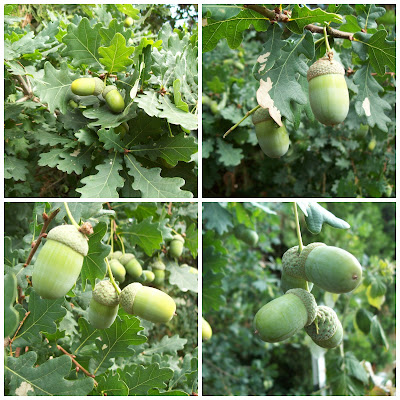