Today was the first day that I woke up and it was really starting to feel like fall.  Although we have had little moments here and there since fall started that had a little hint of fall, we have mostly been having lovely sunny days with temperatures more like summer.  It felt a little odd getting out Halloween decorations when it still felt like summer.  Today, however, I woke up to a beautiful foggy morning, with nice crisp fall air.  A perfect day to experiment with a new soup recipe.

About a week ago I was organizing my bookshelves, and came across one of my most interesting cookbooks, called The Medieval Cookbook by Maggie Black.  About ten years ago I was on a medieval history kick, I love history and sometimes get very interested in certain time periods, part of my studying included learning about medieval foods and one of the cookbooks I tracked down was The Medieval Cookbook.  I am particularly fascinated by peasant cooking, and all of their wonderful soups.  One of the recipes in the cookbook is for a Cabbage Chowder or Caboches in Potage.   The original recipe calls for cabbage, onions, leeks, saffron, salt, in a chicken stock, along with the addition of coriander, cinnamon and sugar.  And suggests serving with bacon.  I didn't have all of these ingredients, and I also wanted to fill out the soup more with potatoes, so here is my take on Cabbage Chowder.

Chicken broth ( a few small cans or a box)
Salt and Pepper to taste
Italian herb blend to taste
1 head of cabbage chopped
4-5 medium potatoes peeled and cubed
2 medium onions chopped
about a cup or two of frozen crinkle cut carrots for a little color
and then, because I cannot resist, I added a package of baby crimini mushrooms, we all love mushrooms here, and the rich flavor that they impart to all soups and chowders, but I am sure this soup could be made with out them.
and like the original recipe I did add a couple dashes of cinnamon and a tablespoon of brown sugar.
1 1/2 cups milk along with 3 tablespoons of butter and 1/4 flour to make a white sauce as a thickener
1/2 cup instant mashed potatoes
I normally add celery to my soups and chowders but forgot to with this soup, if I made it again, I would probably also try adding celery with the other veggies.

I added all of the ingredients up to the addition of the mushrooms into my crock pot and cooked it on high for about 5 hours, then I realized my crock pot was not cooking it fast enough, so I transferred it to a soup pot and finished it on the stove, in about another hour and a half, when the potatoes and cabbage were cooked through. I then added the cinnamon (just about 1/2 a teaspoon, maybe a dash more, a little goes a long way) and the brown sugar.  Here is what the chowder looked like at this point. 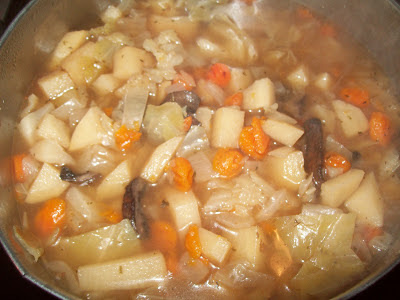 Then, in a small sauce pan I made a white sauce by first melting the butter over medium high heat, then adding the flour until it formed a paste, cooked it for about a minute stirring constantly with whisk, then I added the milk and a little salt and pepper, and stirred until it was a nice gravy like consistency.  I then stirred that into the soup, which helped to thicken it up a bit and give it that chowder consistency.  The soup was still a bit too thin so I took a potato masher and used it to break up some of the potato chunks in the soup and also added 1/2 cup of instant potato flakes, which are wonderful to have on hand for thickening.  That did the trick, and the chowder was a nice consistency.  Here's how it looked when it was finished. 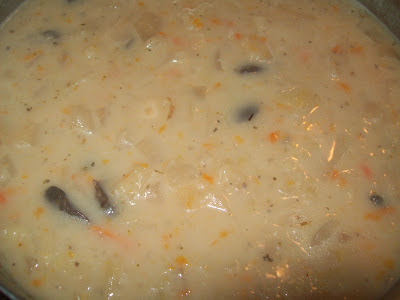 Here is our Cabbage Chowder all served up, with extra bacon on the side for sprinkling on top and a nice slice of sourdough.  The soup was wonderful, I loved the very subtle hint of cinnamon, a perfect October dinner. 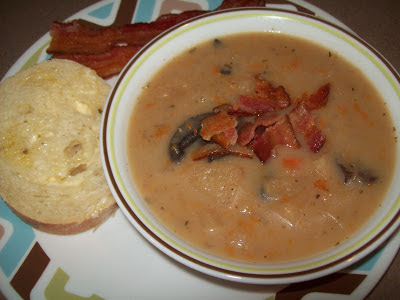 Keeping with the fall theme I decided to bake apples for dessert.  One of my husbands favorite apples is the honeycrisp, and I buy some every year when they come in season, I did however fail to look at the price or weigh them, thinking that how much could apples be in the Pacific Northwest in the fall, and was quite startled at the check out when they rang up over $10.00 for five apples.  Yikes!!  So these apples deserve special treatment, and I have learned my lesson about paying attention to the produce weight and price.  Here's how I make baked apples, nice and simple, and a dessert my mom used to make my sisters and I when we were little.

Core an apple per person, set apples in an oven proof baking dish.  Sprinkle inside of apple with cinnamon, then add a teaspoon of raisins, a tablespoon of brown sugar, a few more raisins, and another sprinkle of brown sugar and another dash of cinnamon.  Add a cup of water to the base of the pan to help steam the apples.  Bake at 375 F. until apples are soft through, about 35-55 minutes.  I served them with a scoop of vanilla ice cream and a drizzle of caramel syrup (my favorite), you can also eat them plain.

Here are the apples all prepped and ready for water and baking. 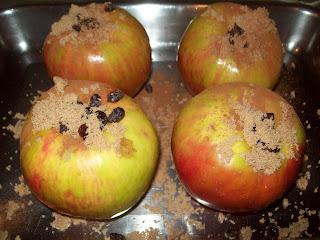 Here is how I served them, yummy dessert, and just the thing to get me in the mood for this weekend's town apple festival. :) 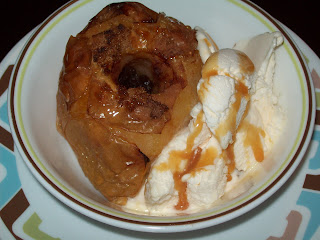 You might also enjoy my mushroom chowder recipe , a somewhat similar chowder, minus the cabbage and cinnamon, but also a delicious fall soup.

Here is my Amazon link to the new edition (my edition is out of print) of The Medieval Cookbook by Maggie Black, full of interesting recipes along with their history.  I hope to work through some more of these recipes this fall and winter.

Hope everyone has an enjoyable weekend! :)

Posted by April's Homemaking at 1:17 AM