For week #37 in my 52 weeks of fairy tale series, I have chosen a tale from the Grimm brothers.  Although this is a classic tale, the first time I read it was earlier this year as I was reading through my various fairy tale books to decide on which fairy tales to share.

The tale is called The Goose Girl. 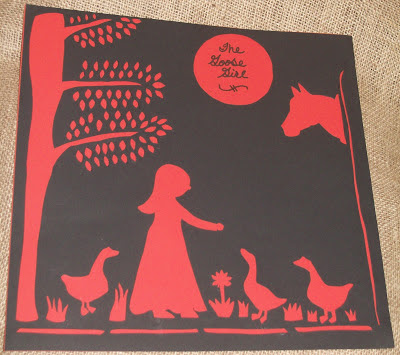 This tale begins with a Queen sending her daughter off to be married to her betrothed, a prince in a far away kingdom.  The Queen loved her daughter very much, and provided her with everything a royal princess would need, gold, silver, jewels, clothing, and other beautiful things.  She also sent a lady-in-waiting to journey along with the princess, they each had a horse, The Princess's horse was called Falada, and was a magical horse that could speak.

Before her daughter left, the Queen pricked her finger and let three drops of her blood fall onto a white cloth.  She gave this cloth to her daughter and told her to keep it near to her for good luck.  The princess hid the cloth in her blouse, and her and her mother sadly said their goodbyes.

After they had been riding for a while, the Princess became thirsty, and asked her lady-in-waiting to get down and fetch her some water in her golden cup.  The lady-in waiting answered very rudely, and told the princess to get down and get it herself.

So the princess got down and got herself the water, at which time the cloth that her mother had given her said " If your mother knew this, it would break her heart."  The princess was humble however, so she didn't say anything to her disobedient servant, after getting her water, she got back on her horse, and started back on her journey.

After a while, the princess became thirsty again, and when she asked her servant for water she received the same rude response as before.  Again the princess got down to get her own water, and again the cloth in her blouse said "If your mother knew, it would break her heart."  The princess bent down to get her water, and this time she was upset, and she didn't notice that the cloth with her mother's drops of blood fell from her shirt and into the stream of water, which carried it away.  The lady-in-waiting did notice, and she was happy, because she knew that not having her mother's special cloth would make the princess weak.

As the Princess went to get back on her horse Falada, the lady-in-waiting forcefully told the princess that she would no longer be riding Falada and instead would be riding her horse, in addition to that she made the Princess remove her royal garments and put on the servants clothing.  Lastly, the wicked lady-in -waiting made the Princess swear before heaven that she would never tell a creature at the palace what had taken place.  Since the lady-in-awiting was threatening her life, the princess had no choice, and took the oath.  Falada saw this all and remembered.

The Lady-in-waiting knew that Falada the horse was magical, and that he could talk, not wanting the horse to give up her secret, she had the horse killed.  However the kind and humble princess had become friends with the servants at the castle, and when she heard what was to become of her Falada, she asked the man in charge of the task, that if she gave him a piece of gold, would he do her the favor of hanging up the horse's head at the gateway to town, where the princess had to pass on her way to tend the geese every day.  The man agreed, and hung up Falada's head at the gate.

As the Princess passed the gate the next day with Conrad, she said to Falada "Alas! dear Falada, there thou hangest."  Falada replied " Queen's Daughter, if thy mother knew thy fate, her heart would break with grief so great."

Conrad and the princess made there way to the field, the princess let her hair down, and Conrad saw how beautiful and golden it was, he wanted to pluck a strand of her hair.  The princess didn't want Conrad to do this, so she said a magical rhyme that sent Conrad's hat flying off in to the field.  When he got back the princess had finished brushing her hair, and had put it back up.  Conrad was sulky about this, but they tended the geese until evening.  The next day the same thing happened, and Falada said the same thing as the princess passed by, and Conrad's hat once again blew away when he became too fond of her golden locks.

That evening Conrad went to the King, and said he would not tend the geese anymore with the goose girl, and that strange things kept happening, he told the King about her talking to Falada as well.  The King told Conrad to go tend the geese with her again tomorrow and that he would find out what was going on.  The King heard Falada the next day say to the goose girl " Queen's Daughter, if thy mother knew thy fate, her heart would break with grief so great"  The King saw the girl take down her beautiful golden hair to comb it, and Conrad's hat once again blew away.

This is definitely a darker tale by the Grimm brothers, with the poor horse being decapitated, and the lady-in-waiting meeting such an awful end (even if it was her own idea).  Definitely a candidate for a revised version for children.  I imagine that this is why I had not heard it as a child, but I had always heard of the Goose Girl, just never the story behind it.  I do think that the tale is very interesting.

I had a great time crafting a paper cutting for this story, paper cutting is fast becoming one of my favorite activities.  Here is how it turned out.  I really enjoyed making the tree! 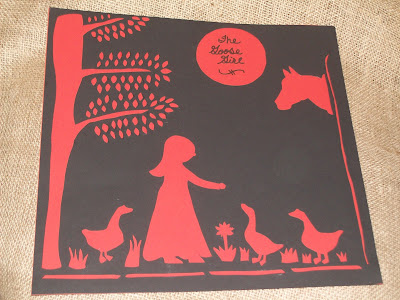 We are having a fun Halloween week here, it will be a rainy evening for the various get-together's that the kids are attending this weekend.  We had fun gathering costume items today, a quick trip to bi-mart and the costumes are ready to go, I look forward to posting pictures later.

My prayers and thoughts for your safety, go out to those of you in the path of Hurricane Sandy.

Posted by April's Homemaking at 4:16 PM