This week I chose the story of Thumbelina for my 52 Weeks of Fairy Tales- Week #3.  I was browsing through my children's books, to decide which tale I might read this week, and stumbled upon my Tasha Tudor's Fairy Tales Book.  The first story inside was Thumbelina. 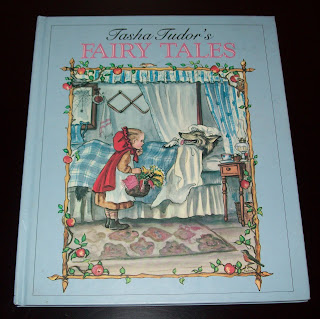 Thumbelina was written by Hans Christian Anderson, published in Denmark in 1835.

The story of Thumbelina begins with a woman who wanted very much to have a little child.  So she seeks the advise of a wise old women, who gives her a barleycorn, and tells her to plant it in a flower pot.  The women goes right home, and plants the barleycorn.  Within a few days a beautiful flower grew from the seed, the bud was still closed, and the women thought it was so pretty that she gave her flower a kiss.  The flower opened up, and inside was a beautiful little girl, no bigger than your thumb.  So the little girl was named Thumbelina.

The women made a little walnut shell cradle for her tiny girl, as well as petals for bedding.  She gave Thumbelina a plate filled with water, and Thumbelina would sail around it on a leaf, or play among the flowers.
One night a horrible thing happened to Thumbelina- and old mother toad stole Thumbelina from her tiny bed, and brought her to the muddy stream where she lived with her ugly son.  Old Mother Toad thought Thumbelina would make a lovely bride for her son.  They kept Thumbelina out on a lilypad while they prepared a home for her and her groom to be.  Thumbelina was very sad, and the fish took pity on her, so they nibbled away at the stem of the lily pad, and the lily pad and Thumbelina floated downstream.  The birds all thought she was very pretty, then a white butterfly let Thumbelina tie her scarf to the butterfly to pull the lily pad along safely.  All would have been fine if it wasn't for a June Bug spotting her, and carrying her off into a tree.

The other beetles thought she looked strange though, so the June bug carried her down to a daisy plant, and left her all alone.  All summer she stayed there and lived off of the honey in the flowers, and dew from the grass.  As autumn came, Thumbelina wandered, now her clothes were rags, at last she found the home of a field mouse.  The field mouse welcomed her, and let Thumbelina stay in exchange for housekeeping and stories of the outside world.  The mouse introduced Thumbelina to their neighbor Mole, Mole fell in love with Thumbelina, but Thumbelina did not like him.  Feildmouse fancied herself a matchmaker though, so she began planning the wedding for Mole and Thumbelina.

One day all three were walking through the tunnels between the mouse home and the mole's home, and came upon a sparrow who had fallen down the hole and become stunned by the cold.  Thumbelina took care of the sick sparrow, when spring came she let the sparrow free, the sparrow offered to take Thumbelina with, but Thumbelina didn't want to be rude to field mouse who had taken her in.  Soon however, mouse became cross with Thumbelina for not being excited about the wedding she had planned for her and mole.  The mouse threatened to bite Thumbelina if she didn't show more gratitude.

The wedding day arrived, and Thumbelina went outside to look at the beautiful sky one last time before she was to be wed to Mole, and live in his dark tunnels.  As she was bidding the sun farewell, her friend swallow saw her, and offered to take her to a land that is warm and full of sunshine.  Thumbelina decided to go, climbed on the swallows back, and flew with the swallow to a warm country.  The swallow set her down in a beautiful garden, she was delighted to see the flowers, and clapped her hands.  Then the largest flower opened and inside was a man no larger than Thumbelina, who was very handsome.  He wore a crown, and had wings.  Then Thumbelina noticed all of the flowers held a tiny person.  The tiny man with the crown was king of them all.  The king took off his crown and put it on Thumbelina's head, and asked her to be his wife.  Thumbelina became Queen, Thumbelina was renamed Queen Maia.  Everyone brought her gifts, including a pair of wings, which she attached to her shoulders, and now she too could fly around.  Her and her husband lived happily ever after in the sunshine filled country far far away.

I enjoyed this story, and have always loved the idea of little miniature people and lands.  Probably one of the reasons I collect miniatures, and enjoy making fairy gardens.  As a child I enjoyed making miniature scenery in shoe boxes, and very much enjoyed any miniature type of doll I was given.

So for this weeks craft, I decided to make another doll, since I am on a doll making kick right now.  I am enjoying seeing a new little doll added to the bookcase shelf each week.  I normally make dolls 3 1/2 inches tall, since Thumbelina is supposed to be the size of a thumb, I used the 1 1/2 inch doll pattern.  Here is how she turned out. 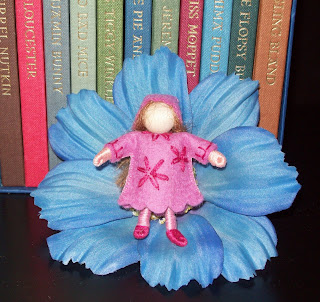 I found a perfect flower for her in my silk flower bin.  I really want to make her a felt swallow, however, I am still trying to make the best pattern.

I think it would be fun to read this story to a child then let them make their own little Thumbelina world in a shoebox.  It would also be fun to look up pictures of mouse and mole tunnels to see what it would have been like for Thumbelina while she was living with mouse underground.  Also, I wonder what ever became of her mother, the women who planted the barleycorn and hoped for a child of her own.  I would hope that maybe the King and Queen would visit her to say hello, or maybe send a note back with sparrow.

I found this website the other day when I was reading about Thumbelina, and you can read the story here online.
http://www.kids-pages.com/folders/stories/Thumbelina/page1.htm

Here is my Amazon Affiliate link to the book I use to craft my little dolls:

I would also like to note that Mr. Groundhog has taken up residence on the book shelf as well, only a couple of weeks left before he comes out to let us know if we will have six more weeks of winter or an early spring. 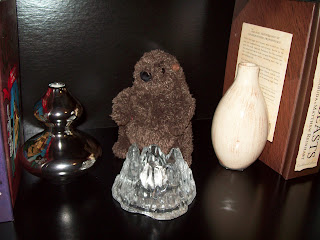 We have been having quite some rain around here the last couple of days, check out my post about our visit to Molalla River as it has risen quite significantly.

Hope everyone has a nice weekend!

Posted by April's Homemaking at 11:56 PM