The Land of Counterpane

I have enjoyed the poems from Robert Louis Stevenson's A Child's Garden of verses since I was a young child, and have read through them countless times. This week when I was sick and in bed, one of my favorite Stevenson Poems came to mind. 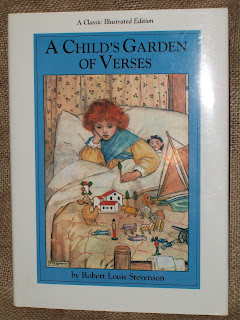 The Land of Counterpane - by Robert Louis Stevenson

When I was sick and lay a-bed,
I had two pillows at my head,
And all my toys beside me lay
To keep me happy all the day.

And sometimes for an hour or so
I watched my leaden soldiers go,
With different uniforms and drills,
Among the bedclothes, through the hills;

And sometimes sent my ships in fleets
All up and down among the sheets;
Or brought my trees and houses out,
And planted cities all about.

I was the giant great and still
That sits upon the pillow-hill,
And sees before him, dale and plain,
The pleasant land of counterpane.

This is one of his poems from A Child's Garden of Verses, I also love the poems My Shadow and The Land of Nod. This is such a great book, a must read for bedtime story time.

This week I had quite the visit to The Land of Counterpane.  It started Monday with a few small, seemingly harmless coughs, and by Tuesday I was in the grip of a full fledged flu!  Coughing away, and a fever steadily rising, eventually reaching 103.7 !  I was pretty much out of it for two days, in bed, with magazines, TLC and History Channel reruns, and of course my labs.  The dogs were great, my youngest lab, decided that the cure for my cough was that if she was nearby and I coughed, that I needed lots of lab kisses, she was a bit too exuberant with her bedside manor though, so Gary thought it best that she be put on Mailman and Cat watch, and only visit  during her nap time :) . My old faithful girl lab/shepherd did not leave my side, except a very quick bathroom break or two, after which she would immediately return to keep me company, she always makes me feel a little bit better.

Gary and the kids were very helpful, and kept up with the laundry, and I walked Gary though making Beef Stock, which we let cook overnight in the crockpot, and turned into a beef soup for Wednesday.

Thankfully Thursday morning my fever had gone, and my cough had greatly improved.  I was quite glad to get up and get dressed, and putter around the house.

When we were sick as children, my mother would always make up a bed for us on the couch in the living room, and very lovingly watch over us, bringing us cool cloths for our fevered heads, and soda crackers, 7up, and chicken noodle soup.  Another more old fashioned remedy that I remember as a child, was being served a bowl with toast with scalded milk poured over the top and salt and pepper.  Sort of a strange tasting concoction, at least to this child of the 70's and 80's who really did go "Cuckoo for Cocoa Puffs".  As I am writing this though I think I may have to make up a bowl of milk toast just to remember the taste.

Anyone else remember Milk Toast?

I will be quite happy when this flu season passes us by, and the warm sunshine returns!  Hope everyone else is doing well, and is ready to have a nice weekend! :)

Here is my Amazon Affiliate link for A child's Garden of verses this one is illustrated by Tasha Tudor, what a great combination!

Posted by April's Homemaking at 8:48 PM

Email ThisBlogThis!Share to TwitterShare to FacebookShare to Pinterest
Labels: homemaking