For week #7 of my 52 weeks of fairy tales, I have chosen another tale recorded by the Grimm brothers, The Bremen Town Musicians.

The Bremen Town Musicians is a classic childhood tale, and was one that I was very familiar with as a child. 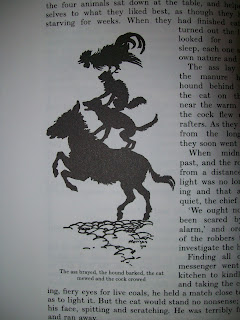 The story starts out with an old donkey, whose owner is contemplating how to get rid of the donkey since he is no longer useful.  To avoid his uncertain fate, the donkey runs away, with plans to make his way to Bremen, and become a musician.

On his way, the donkey comes across a sad old dog, who is lying on the side of the road.  The donkey asks the old dog what is wrong, and the dog replies that he is so old, he can no longer keep up with his pack, and is no longer useful to his master.  The dog has run away from his home, to avoid his fate, and has no idea what he will do.  The donkey suggests that the dog follow him to the town of Bremen to become a musician along with the donkey.  So the two set off.

The donkey and the dog come upon a tired old cat, who is unable to catch mice anymore, and ran away when he heard his masters planning to get rid of him.  The donkey and dog invite the cat to join their musical group, and all three set off toward the town of Bremen.

As all three make there way down the road further, they come upon a rooster who is crowing with all his might, and who is frustrated.  Rooster explains to the donkey, dog, and cat, that he failed to wake his masters up on time, and was about to be turned into stew!  So the rooster ran away, but was unsure what to do, of course the donkey and dog, and cat invited the rooster, along with his wonderful crowing, to join their musical group, and all four set off to Bremen.

Inside the house was a group of robbers, counting up their loot, and preparing their evening meal, when they heard the noise coming from the donkey, dog, cat, and rooster. They thought that there was a terrible monster outside the house, so they left their loot and food, and went running off into the woods.  The donkey, dog, cat, and rooster decided to not let the food go to waste, so they went in the house for a warm meal, and went to sleep for the night.

Later that evening, the robbers decided it was silly of them to have run away from the house, and convinced themselves that they must have been hearing things, so they made there way back to the house.  When they arrived, the robbers sent in one man to investigate before they all went in.  The man spotted a yellow glow, and thought it was the embers from the fire, and bent down to light his candle. The yellow glow was really from the cats eyes.  The cat didn't like this fellow getting so close, so the cat hissed and scratched the robber, the man turned to flee and was bit in the calf by the dog, all this commotion woke the donkey, who proceeded to give the robber a swift kick, and as the robber was fleeing the home, the rooster let out a loud crow, which sounded like a scream, and chased the robber right out of the house.

The robber headed back to the other men, and told them that he was attacked by a horrible witch who scratched him with her long fingernails (the cat), a large man who had attacked him with a knife (the dog), a giant who beat him with a club (the donkey), and worst of all a creature who screamed at him on the way out (the rooster).  The robbers decide to abandon the house, and never return.  The old donkey, dog, cat, and rooster, decided that they are so comfortable in the house, that they would stay and live out their days together in the house, and they all lived happily ever after.

I am not sure who wrote or illustrated the Bremen Town Musician book that I had as a child, and I no longer have the book, but  I remember that I loved looking at the pictures of these four animals going off to start a musical group, and used to enjoy, very much, how they found the house and scared away the robbers.  Such a fun story.

For my craft this week, I decided to try my hand at a little wool felt applique.  I searched donkey, dog, cat, and rooster stencil images until I found patterns that would work, then used my printer to re-size them until they were the right size to sit upon each other.  I pinned the paper to the felt and used a sharp tiny pair of scissors to cut them out.  I am very happy to have been gifted these wonderful little scissors by my husband's great aunt, who recently thinned out some of her sewing supplies.  They work beautifully on the wool felt, and it made all the difference in cutting these animals out.  Thanks for the wonderful scissors Aunt Deloris!

I used a tiny bit of Tacky glue to hold the felt pieces in place, then stitched them down.  Here's how it turned out.

Of course I had to make the classic picture of The Bremen Town Musicians standing upon each others backs, and they are peering into the house they found in the woods. 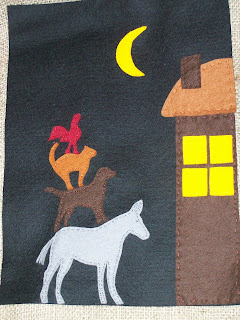 Here is a close up of the animals. 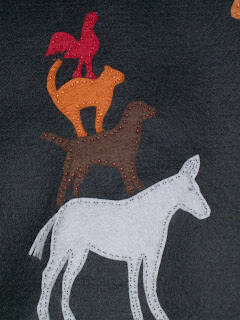 I may put this applique in my fairy tale scrapbook, or use it in some other way, I'm not quite sure yet.  I really enjoyed this craft, and look forward to doing more wool felt applique.

Hope everyone has a nice weekend, we are busy, busy, with school spring projects and events, but its a fun busy. :)


Posted by April's Homemaking at 5:20 PM