This week, for week #8 of my 52 weeks of fairy tales, I have chosen a tale written by Hans Christian Anderson in 1843 - The Ugly Duckling.  I loved reading this story as a child, and always looked forward to the ending. 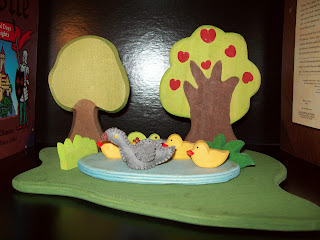 The Ugly Duckling decided it was best if he ran away from the farmyard, so he went to live down by the marsh, but even the wild ducks and geese teased the ugly little duckling.  Winter came, but the little duckling was not big enough to fly away, so he stayed in the marsh all through the winter.  The ugly little duckling had a very hard time finding food, and the weather was getting colder and colder, and he was almost stuck in the frozen marsh. 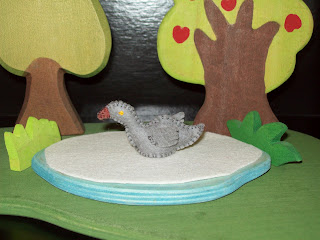 Fortunately a farmer and his son came by, and noticed the poor bird, and brought him back to their barn, where he was able to warm up, and spend the rest of the winter.  Soon spring came, and the ugly duckling was still being teased, and was so depressed.  He came upon some beautiful swans down by the water, the ugly duckling decided to throw himself at their mercy, maybe these beautiful birds would just do away with him, so he no longer had to live a life of being ugly and lonely and sad.  The beautiful swans surprised the ugly duckling, they were not mean to him, the told him he was beautiful.  He could not believe what they were saying.  The swans told him to look in the water at his reflection, when he looked he saw that he had become a beautiful swan.  He joined his new swan family, and when they flew away, he was able to stretch his now strong and beautiful wings and fly as well.  He lived happily ever after. 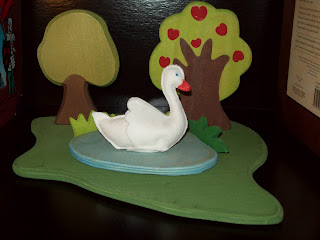 For my craft this week, I stitched up a little gray "Ugly Duckling" out of wool felt. 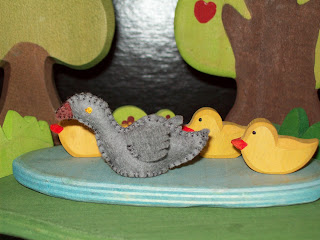 And the white swan in the picture above, also out of wool felt.  I had fun setting the different scenes for this story using my little Ostheimer ducklings, and other wooden pieces.

I found the patterns for both birds in my handy Feltcraft book that I have had for years. This book is great for anyone getting started with felt crafts, lots of cute projects. 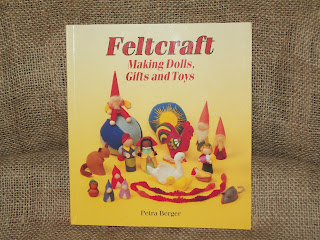 Here is my Amazon affiliate link if you would like to learn more about this book.

This is such a nice story for reminding children not to tease people because they are different.  The Ugly Duckling in this story becomes a swan, baby swans are called cygnets.  When I was a teenager, I was a volunteer at the Oregon Zoo for two summers and spring breaks.  Teen volunteers used to work in the Children's Zoo area, and we had a lot of wonderful opportunities to work with different animals.  One of our tasks was taking the ferrets for a walk around the back of the zoo, they had little leashes and everything, the zoo keepers always told us to stay away from the swans that also lived in the back of the zoo, because they could be quite mean, and potentially hurt us quite a bit.  Apparently they are especially protective of their little cygnets. Swans sure are beautiful birds though, and I used to enjoy seeing them from a distance.

Have a great weekend! :)

Posted by April's Homemaking at 10:58 PM