Monday was a nice day, Gary and I took the morning off and went on a nice drive. 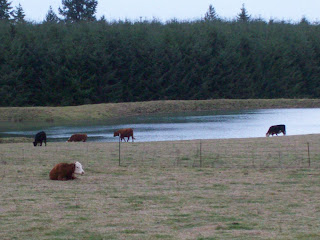 We didn't intend to go exploring, but a noise that we had been hearing for the last month finally piqued our curiosity enough that we had to go figure out where it was coming from.  The noise we had been hearing sounded like a airplane flying overhead, and I assumed it was just jets flying over that I couldn't see because of the clouds, but then occasionally it also sounded like something large being moved around, like a large metal container or something.  I kept writing it off, maybe it was just something going on at a nearby cattle operation, or some other company at the edge of town.  Gary knew it wasn't a jet, and after hearing it for quite a long length of time, I was convinced it wasn't as well.  So off we went to figure out where it was coming from.

Surprisingly, we were able to find the noise, and figure out exactly what it was within about 10 minutes.  Gary pulled the car over to take a cell phone call, and I rolled down the window to listen for the direction of the sound, and realized we were right by it.  Gary drove around the block, and we realized it was a some sort of logging operation.

Molalla used to be quite the logging town, for various economic reasons, ever since I have been familiar with the town's logging past, it was mostly ghost town like old logging yards like this.  There is still an up an running  timber yard just outside of town, but this is what the back of town looks like. 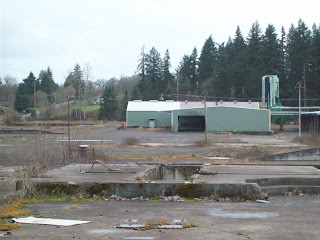 So I was surprised to see this. 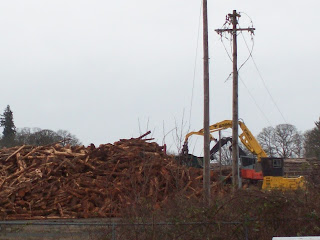 And this is the machine that is making the noise that we were hearing.  Surprisingly, this machine, which apparently chops up wood, sounds like a jet plane, and clanging large metal.  Which made sense after watching the machine do its job. Here you can see the logs being loaded into the machine. 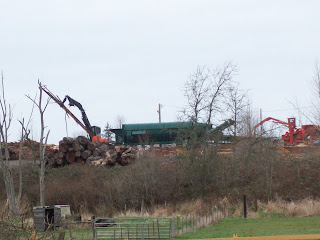 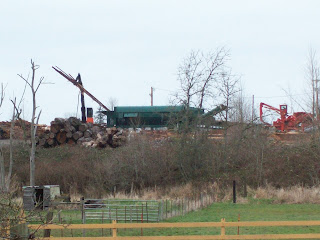 In they go, gobbled right up. 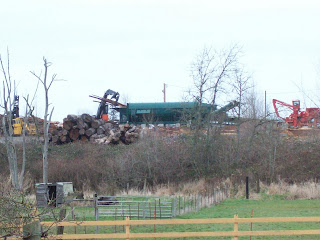 So, mystery solved.  It was very interesting for Gary and I to watch this process, and drive around the old lumber mills, as we very much enjoy watching Ax Men season after season, it was interesting seeing this part of the logging industry.  The noise doesn't bother me, especially now that I know what it is.

Since our mystery was solved rather quickly, we decided to take a drive on some of the country roads just outside of town, and we had fun snapping quite a few pictures. 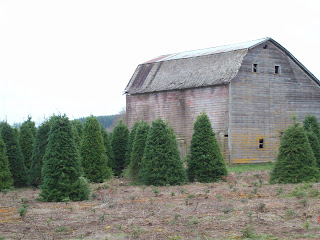 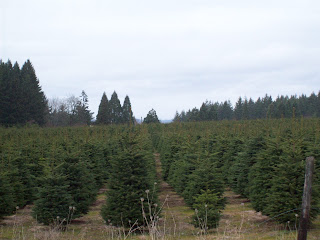 Another old barn, out in a pretty green field. 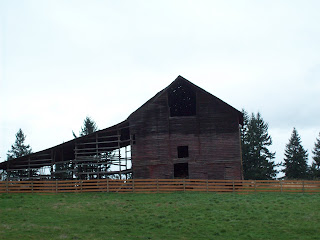 This old little building is being swallowed up by bramble. 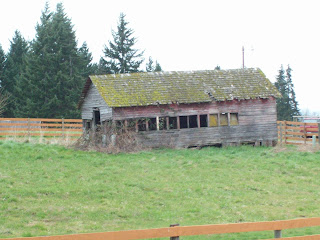 The weather was drizzly, and as we got higher up the air was nice and crispy fresh.  Definitely colder. I loved this rolling grassy field, so pretty. 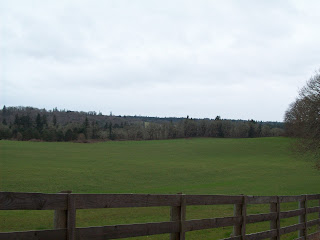 We saw a boggy little area with old cattails, and the most pretty colors of moss everywhere.  I love moss, and have an area of my garden devoted to moss and rocks, so my kind hubby actually got out of the van, and got in the muck to bring me a couple of moss covered sticks to add to my moss garden. 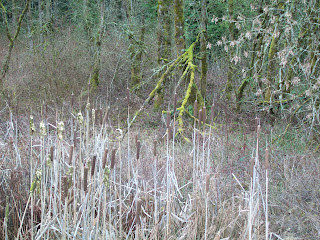 The rain started coming down pretty good, so we decided to head back into town, and check out a little coffee place, called Cowboy Coffee. 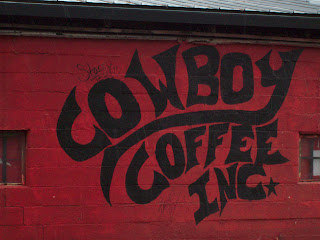 The coffee stand is actually a drive through coffee place, but recently they have opened a little building where you can go inside to sit down to enjoy your coffee.  The building is decorated with interesting country antique items, I thought this double oil lamp was pretty neat looking. 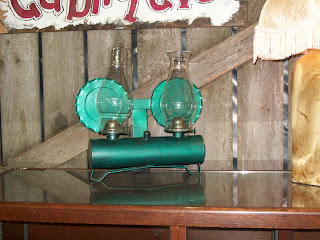 The tables are covered in vintage tablecloths, I chose to sit at the bright yellow table.  I tried their mocha, and hubby who has given up coffee for lent had a chai tea. 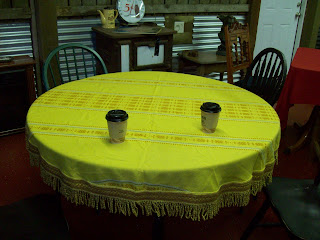 The ceiling was covered in old coffee burlap bags, which I thought was pretty fun.  It was an interesting little place to visit, and the coffee was decent.  Fun ending to our outing. 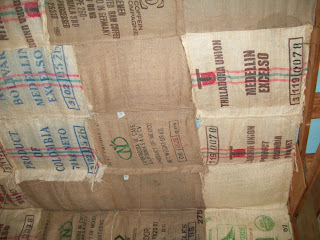 We came home, and the rain really started coming down, the rest of the day was down-pouring and hailing off and on.  Yesterday evening was quite cold, and the smell of snow was in the air.  Sure enough we woke up to a two hour school delay and a dusting of snow, up in the hills they get quite a bit more snow, and it has to melt before the buses can get the kids. 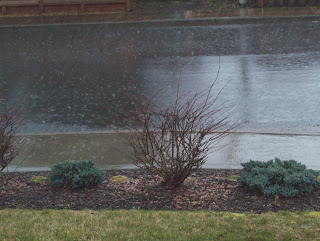 Today we had a little more snow and hail, and now the sun is shining away and is nice and warm, spring has such funny weather around here, it can't seem to make up its mind.  Luckily I enjoy both down-pours and the nice sunshine breaks.

Posted by April's Homemaking at 3:21 PM