I decided to spend the evening catching up on my 52 Weeks of Fairy Tales post, earlier this week I posted week #19 -The Peddler of Swaffam, for Week #20 I have chosen a tale by Hans Christian Anderson called The Shepherdess and the Sweep. 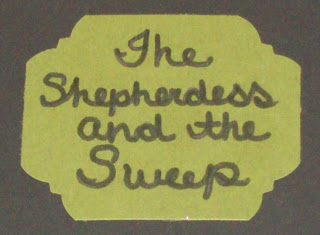 Across the parlor was a mahogany cabinet with many carvings, one of which was a satyr with goat legs, the children of the home called him Major General-field sergeant- commander-Billy Goat's Legs, they thought the name suited the carved satyr very well.  The satyr thought the shepherdess was beautiful, and so he asked the Chinese Mandarin figure for her hand in marriage, and like he always did the Chinese Mandarin figure nodded yes.

The Shepherdess did not like this at all, even though her grandfather thought the satyr would be a fine husband, since he was made of mahogany and the cabinet he was carved into, held all the silver and who knew what other treasures in his drawers.  The shepherdess had heard that in the satyr cupboard's drawers were eleven other porcelain girl figures, and she had no desire to be put in a drawer.  Her grandfather told her that he had already said yes, and there was nothing she could do, then he nodded off to sleep.  So she asked the Chimney Sweep to help her escape and he agreed.  They climbed down the table, and tried hiding in different parts of the parlor.

When the other carvings on the cabinet alerted the satyr that the Shepherdess along with the Sweep were escaping, the satyr yelled out loudly to her grandfather "The Shepherdess and The Sweep are eloping!"  Upon hearing this, the Chinese Mandarin figure woke up, and was very angry, and he started nodding furiously.

The Chimney Sweep helped the Shepherdess to escape up the stove pipe and out through the chimney.  The climb up was frightening and dark, but above them was a bright star shining down into the chimney, which helped them to reach the top.  Once they reached the top and looked out at the wide world around them, the shepherdess became very frightened and started to cry, she did not like what she saw.  The world was far too large and scary.  Even though she didn't want to marry the Satyr, she begged the Sweep to take her back to the parlor, so he did. 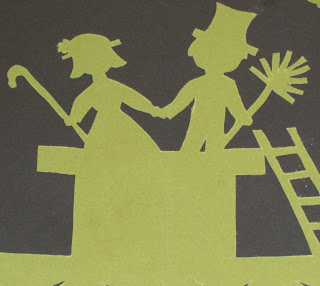 When the shepherdess and sweep got back to the parlor everything was silent, and they noticed, that in his anger, the Chinese Mandarin figure had fallen off the table and broken into pieces.  The shepherdess began to cry, but the sweep assured her that someone would come along and glue him back together.

And someone did, the Chinese Mandarin was glued together, but when he was repaired his head lost the ability to nod, so when the satyr asked if he could still marry the shepherdess, the Chinese Mandarin could not nod his head yes.  So, happily, the Shepherdess and the Chimney Sweep were able to spend the rest of their days standing next to one another.

I love imagining objects in the home with a personality of their own, what do all the dolls and trinkets do while we are away.  A modern example might be the Toy Story movie series, which my children (and hubby and I) really enjoyed.  After reading this tale, you might look upon your trinkets in a whole new light. :)

You can see more of his work in this link to a book at Amazon with some of Anderson's paper cutting art.


After reading this I knew I wanted to do a paper cutting of my own for this week's craft.  I decided to cut the picture out of a green paper rather than white, and, although no where near as intricate as some of Anderson's paper cuttings, I like how it turned out. 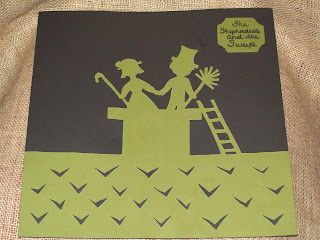 I drew the image on the backside of the green paper, and at first had a hard time thinking backward, after a bit of erasing, I got the drawing the way I wanted, and cut it out using a craft knife on a cutting mat.  Then glued the cut paper to a black piece of paper.  The roof pattern was inspired right from the original paper cutting that Anderson made, but rather than just the sweep I also added the shepherdess.  Earlier this year I had fun making transparencies with cut paper designs, after today's paper cutting, I have decided that I really enjoy this type of crafting, and hope to make many more!

I am looking forward to a nice weekend, the kids are involved in their environmental "Green Team" club's yearly public event, there will be lots of local music and fun, so we will be packing a picnic and enjoying a day in the park.

Hope everyone has a wonderful weekend!