52 Weeks of Fairy Tales Week #19 The Peddler of Swaffham 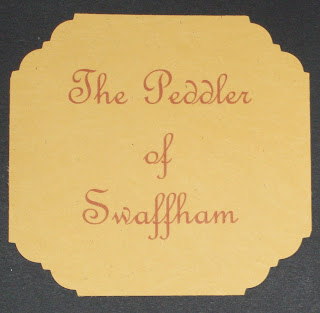 This story is about a a peddler who lived a long time ago in the countryside of England in the town of Swaffham.  One night he had a dream that if he traveled to London Bridge he would hear some good and beneficial news.  The next night, the peddler had the same dream and started to take notice.  The third night the peddler had this dream, he was convinced that he should make the journey to London Bridge.

The peddler was poor and didn't have a horse, the journey was long, and by the time he reached London Bridge his shoes were nearly worn through. For three days he walked up and down London Bridge waiting to hear his special news.

"You came all the way to London Bridge because of a dream?  Why just last night I, myself, had a dream, that in an orchard behind a peddler's house in Swaffham (a place the shopkeeper had never even heard about), under an old oak tree there is a buried treasure.  Of course I am not so foolish as to leave my shop and travel all the way out to the countryside because of a dream!" 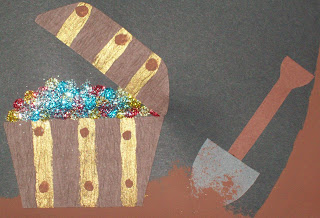 Such a fun story, the Wikipedia entry on The Peddler of Swaffham   has an additional ending to this story, that the peddler used some of his treasure to rebuild the town's falling down church, and that to this day there are signs and pub windows depicting the Peddler.  Here is a link to a picture of The Swaffham Town sign with the peddler.

For this weeks fairy tale, I made another page for our fairy tale scrapbook. 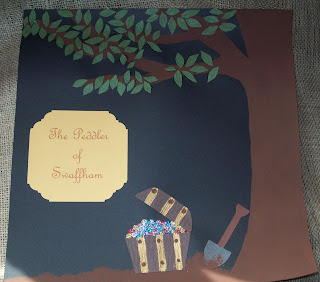 The tree trunk and branches are painted, and the leaves were cut out of textured paper, I was not able to cut out proper oak leaves, I would have needed a tiny oak leaf punch for that, but I do like how the leaves turned out, the textured paper really gives the page some depth, the treasure chest was also cut out from textured brown paper to give it a real wood look, then I painted on the detail. The treasure is gold, silver, ruby and sapphire colored glitter.

This would be a fun story to read, and then set up a real treasure hunt for the kids to find then dig up!

Did you dream of buried treasure as a child?

Posted by April's Homemaking at 10:26 AM