52 Weeks of Fairy Tales Week #21 -Beauty and the Beast

This week's fairy tale #21 is the well known story of Beauty and the Beast.  I have always enjoyed this beautiful story and it is also one of my daughter's favorites.

The story of Beauty and the Beast tells of a wealthy merchant and his three beautiful daughters.  The youngest daughter is named Belle (or Beauty) because she is both beautiful and pure of heart. Her two older sisters are beautiful but very selfish and materialistic.  One day the merchant learns that a great storm has sunk his merchant ships and he has lost his fortune.  The family, who was used to living very well, must now live in a farmhouse, and the daughters must help work to make ends meet.

After quite some time, the merchant hears that one of ships has survived after all, so he must go into the city to see what can be salvaged of his fortune.  He asks his three daughters what they would like from the city.  The two older daughters were only thinking how their wealth might be back, so selfishly they ask for dresses and jewels, Belle only asked for a rose, as none grew around where they lived, and because it was a more simple gift to ask for. 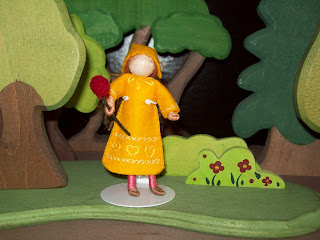 Unfortunately, when the merchant arrived in the city, he found that his ship's possessions had been taken to pay his debts, so he must head back to the farmhouse as poor as when he left.  On the way home, the merchant becomes lost in the forest, and finds a castle in which to take shelter.  Inside the castle, there is plenty of food set out for him, but no person is around.  The merchant accepts the unseen owner's gift of food and shelter, and then in the morning heads out to make his way back home.  On his way out of the castle gardens he sees beautiful roses growing in the garden, and remembering Belle's request, he picks a rose to bring back to her.

When he arrives home his daughters are very sad, and Belle agrees to go back to the castle in her father's place.  When she arrives back at the beast's castle she is treated very well, and the beast tells Belle that she is mistress of the castle.  She is given fine clothing and food.  Every evening at dinner the Beast sits and talks with Belle, after awhile Belle becomes more comfortable with the beast.  Every evening the Beast asks Belle to be his wife, because she is honest, Belle tells the Beast that they can only ever be friends, but each night he still asks.

After months of living in luxury at the castle Belle becomes quite homesick, and begs to go and see her family.  The beast agrees to let Belle go and visit her family if she promises to return in one week.  He sends her with a magic ring and magic mirror, the ring will allow her to return to the castle at once when turned three times around her finger, and the mirror will allow her to see what is happening at the castle.

When Belle arrives home, her sisters are surprised to see her so well fed and so beautifully dressed, and they become jealous of Belle.  When they find out that she must return in one week, the sisters trick Belle in to staying longer by rubbing onion in their eyes to make them cry and look distraught. They hope the beast will become angry with Belle and eat her up.  Belle believes her sisters' act, and agrees to stay a little longer.

Soon Belle starts feeling guilty about breaking her promise to the beast, the beast is her friend and has only ever been kind to her.  She uses her magic mirror to see what is happening at the castle and is sad to see that the Beast is lying half-dead in the rose garden.  Quickly she uses her ring to return home to the beast.

Belle finds the Beast nearly dead, and she begins weeping over him, and says that she loves him.  When her tears fall onto the Beast he is transformed into a handsome prince.  He explains that many years ago he was turned into a beast by a fairy who was angry at him for not letting her into the castle from the rain, and that the only way to break the curse was to find true love even though he was an ugly beast.  Belle and the prince got married and lived happily ever after.

In other versions of this tale, Belle also has three brothers, and another twist is that her sisters who were so awful are cursed to live as statues in the castle until they learn the error of their ways.  I really enjoy this story, and how it addresses the true beauty of having a good heart, and how Belle falls in love with the Beast despite his looks.  I think this is a very beautiful fairy tale.

For my craft his week I decided to make a little Belle doll. 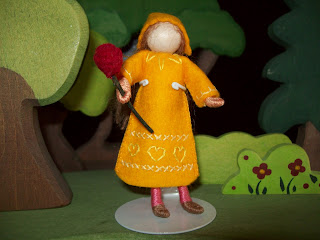 She is a wire frame doll, with a wool felt dress.  Her dress is embroidered with hearts to represent her pure heart, and she carries a little rose as well.

I like the way she turned out, and she is fitting in quite nicely with all the other fairy tale dolls on the bookcase. :) 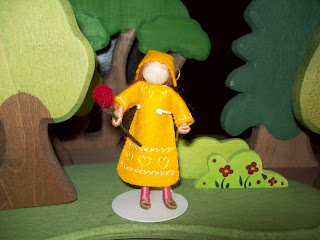 Posted by April's Homemaking at 7:23 PM