For week #18's fairy tale, I have chosen a fairy tale written by Hans Christian Anderson, The Little Mermaid. 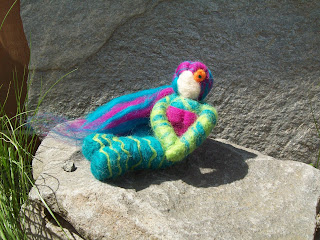 Many people are familiar with the Disney version of The Little Mermaid, which came out in 1989, I was a sophomore in high school at the time, and my youngest sister, who was around six years old at the time, really enjoyed this movie.  Ariel the mermaid and her musical adventure and love story is a fun story.

I had never read the original version by Anderson until this week, I expected there to be differences in the original story verses the Disney version, and there are quite a few differences, especially in the very different ending. 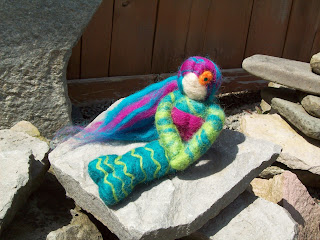 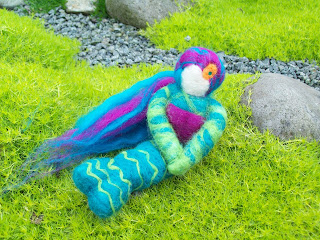 When she returns to the sea, the little mermaid asks her grandmother about human life, mermaids live to 300 years of age and when they die they exist no longer, and become part of the sea, explains the grandmother; humans live a much shorter time, but then go on to live eternally in heaven.  The little mermaid thinks being human is much more desirable, and she wishes to become human like her beloved prince.

The little mermaid visits the Sea Witch and asks her to turn her into a human.  The Sea Witch does have a potion that can turn the mermaid into a human, but there are risks as well as costs.  The Sea Witch explains to the little mermaid that if she can get the prince to fall in love with her, and marry her, that she will gain eternal life like other humans.  However, if she does not marry the prince, on the dawn of the day after his marriage to another woman, the mermaid will die, brokenhearted, and turn into sea foam.

In addition, the potion that will turn the little mermaid into a human, will feel like a sword passing through her, when she recovers from her transformation into a human, she will have beautiful graceful legs, that will be able to dance more gracefully than any human, but with every step she takes, it will feel like she is walking on sharp swords cutting into her feet and legs.  Lastly, the cost for this potion is very great, the Sea Witch wants the little mermaid's most beautiful voice, and so removes the little mermaid's tongue in exchange for the potion. 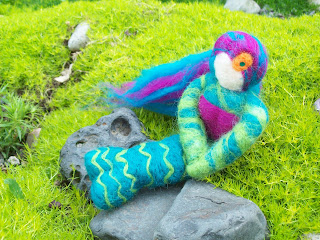 The Little Mermaid agrees to all of these conditions, because she wants so badly to be human, to be with the prince, and have eternal life.  She swims to the surface, near the prince's palace, and drinks the potion, and becomes human.  The prince finds her and thinks she is very beautiful, they become friends, and although the little mermaid is mute, her beautiful dancing pleases the prince. 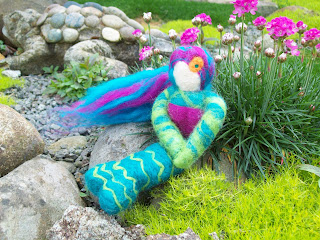 The little mermaid is so sad, she went through so much pain, and now she will become sea foam.  The little mermaid's sisters try to save her, they exchange all of their beautiful hair with the sea witch for a magical knife, if the little mermaid uses the knife to kill the prince, she will turn back into a mermaid and go on to live the rest of her 300 mermaid years.

The mermaid cannot bring herself to kill the prince, she still loves him.  So, the dawn after the prince and princesses marriage, she dives into the sea and turns into sea foam.  But instead of ceasing to exist, she felt sunshine and heard a beautiful melody, she had become a spirit, a daughter of the air, the other daughters of the air explain that because she tried so hard to gain an eternal soul, she now has the opportunity to gain a soul by doing good deeds, such as cooling a child from a hot country with a cool breeze, or carrying the fragrance of flowers on the breeze to please children, for 300 years.

For every good child a daughter of the air finds, God shortens their 300 years of probation by one year, however for every bad child they find, they weep and every tear they shed adds on a day.

The little mermaid spirit kissed the prince on the forehead, and soared away with the rest of the daughters of  air. This story had some nice parts, but a lot of strange parts as well, the Disney version ends with Ariel becoming a human, gaining back her voice, and marrying the prince.  Quite a different ending.  In reading a bit about this tale, others have criticized this original ending as well, and it is much like a Victorian era moral children's tale, scaring children into good behavior- be good or else you are adding days to the the little mermaids probation.

The original tale is a pretty long read as far as fairy tales go, and has lots of disturbing elements, like the pain the mermaid must go through to transform, and the giving up of her tongue.  Although the element of the mermaid wanting a soul is intriguing, in this case, I think I actually prefer the happy Disney version with the cute music, funny Jamaican crab and flounder sidekicks, and happy ending love story.  I did enjoy reading the original though, it was interesting, and I would recommend it for adults, or older children, it would be a great fairy tale to compare and contrast with the musical version. 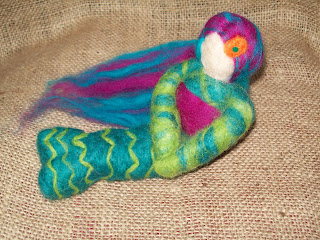 For my craft, I attempted to needle felt a mermaid.  I wanted the tale to be wider, but ran out of blue wool, and her arms could use some trimming up.  I did have fun picking out the marine inspired wool colors for this mermaid doll. I really enjoyed taking her out to the garden for her "photo shoot", it was such a nice sunny day, the garden was perfect for pretend "beach" locations for the mermaid to sun herself. I look forward to running this doll passed my young niece, and getting her thoughts, my niece is however quite the fan of Ariel so we'll see. :)

Posted by April's Homemaking at 2:55 PM