For this week's 52 Weeks of Fairy Tales Post, I have chosen a wonderful Grimm's tale from Germany- Jorinda and Joringel. (or Jorinde and Joringel with traditional German spelling)

This tale was included in my childhood fairy tale book, and it was nice to read it again. 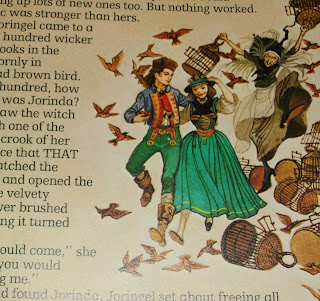 In this story there is a wicked witch who lives in an old castle deep in the woods.  She could change herself into an owl to fly around during the day.  The witch would fly around and keep watch for anyone who might come near her castle.

A young man and women, Jorinda and Joringel, who are engaged to be married, were walking through the woods discussing their upcoming wedding.  As they were walking, they went deeper and deeper into the woods, and unfortunately got too close to the witch's castle.

Any man who got too close to the castle was unable to move, and so Joringel was unable to move.  The witch, still in the form of an owl, swooped down, and turned Jorinda into a little brown nightingale bird.  The witch caught Jorinda, the little brown bird, and brought her back to the castle, and put her in a cage, along with seven thousand other birds, which were also once maidens, and caught by the witch.

After the witch left with Jorinda, Joringel was able to move again, but every time he got near the castle, he would be stuck to the ground, unable to get close to the castle.  Joringel was terribly upset, and had to find a way to rescue his beautiful Jorinda.

When he got near the castle, he was not frozen in place, and was able to approach.  When he touched the castle door with the red flower, the door swung wide open.  The witch tried to stop Joringel, but no spell would work.  Joringel went about looking for Jorinda, and came to a room filled with thousands of bird cages filled with birds.  He was unsure how he would figure out which one was Jorinda, but then he noticed the witch trying to sneak off with one of the cages, and realized it must be Jorinda.  So he ran to the witch, and touched the witch with his flower, and the flower took away all of the witch's power.  Joringel then touched the little nightingale with the red flower, and the little bird turned back into Jorinda.

Joringel used the red flower to break the spell on all of the birds, and everyone, except the witch, lived happily ever after.

For this week's craft I thought I would make a little felt bird cage with the little nightingale Jorinda.

I started with two pieces of wool felt, cut into the shape of a bird cage.  I knew I wanted some dimension to the birdcage, and also wanted a way to keep the bird inside, but be able to take it out.  So I blanket stitched the two felt birdhouse shapes together as well as stitching in a ribbon hanger in the top (see picture below), leaving about two inches at the bottom open so I could add some wool stuffing.  I then pinned my little bird in the center so I would know how big to make the door.  Then stitched a circle-well sort of a circle ;)  in the center of the birdhouse big enough for the bird to fit into.  Using a sharp pair of scissors I cut out a door in the center of the sewn circle, from just the top layer of felt, and leaving the top half inch of the door not cut, so it would open like a flap, I blanket stitched around the door as well.  I then added wool stuffing, and stitched it closed.

Here is the start of the bird house. 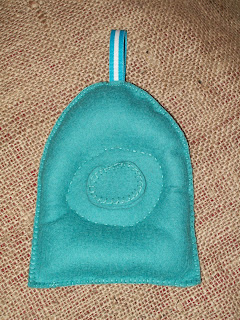 I found an outline of a bird online, and shrunk it down to about an inch and a half, I cut out two bird shapes from wool felt, as well as a little wing.  I gave the little bird a french knot eye, stitched the wing to the front side of the bird, then blanket stitched it together, adding a little wool stuffing before closing up the little bird.  This little bird was very quick to make, and I think would be so cute in multiple sizes for ornaments, or mobiles. 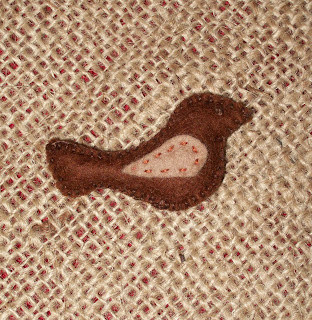 Here is the wool felt nightingale I made a few weeks back for the fairy tale The Nightingale, with the tiny Jorinda nightingale so you can see just how tiny the little bird is. 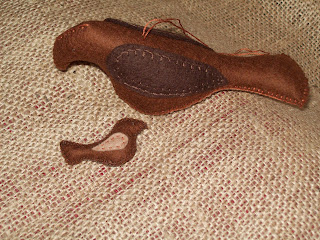 Here is how the bird fits inside the birdhouse. 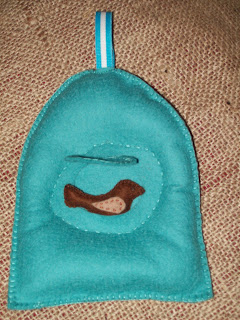 To make the cage of the birdhouse, I cut thin strips of wool felt, and glued them on, ideally I would have sewn them on, but I was trying to figure out the mechanics of piecing this project together, and thought gluing them on would be easier than sewing them on and risk cutting a stitch when opening the door.  I used a fast grabbing fabric/craft glue. 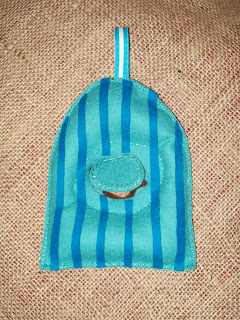 Here is a close up of the little nightingale tucked inside the birdhouse. 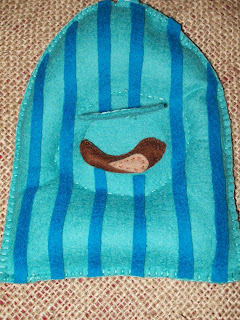 And here the bird is sitting in the door. 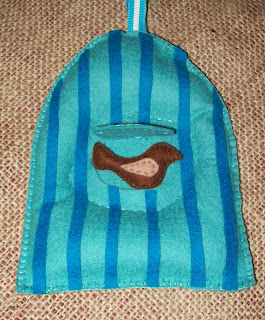 This was a fun project, it was challenging figuring out how to make the birdcage the way I wanted it, originally I had a three dimensional paper bird cage in mind, but I wanted something that would last, along with all of my other fairy tale crafts, so I went with felt, and am happy I did.

Tomorrow I will be spending the day tiding up the dining room from all my sewing and crafting, as well as finishing up my Easter Sunday school lesson, making various salads and desserts for our Easter meal, and of course getting ready for the Easter Bunny visit.  Hope everyone is having a nice time preparing for Easter!

Posted by April's Homemaking at 2:06 AM