Living in a Material World

As a child during the 1980's, I grew up with songs on the radio like Madonna's "Material Girl", my mother was not at all happy with the MTV era, and for quite some time, until we were much older, had the channel locked out from our TV.  Despite her bet efforts, it was hard to avoid hearing popular songs such as "Material Girl", and just like the song says- we are living in a material world- and despite my best efforts, I sometimes fall into being a "material girl".

My son, who patiently follows along during our shopping trips, is often baffled by how much enjoyment my daughter and I get from browsing through the store's many offerings.  He says I suffer from the "Oooo shiney" effect, and wishes we would just diligently stick to our list.  It is true, I can get so excited about the silliest things, and new spring colors, and cute trinkets draw me in.  Granted, there is nothing wrong with enjoying a good shopping outing, and looking at all the new items can be very fun, but also a little overwhelming and stressful.  I work very hard at avoiding adding new items to the home which will eventually become clutter, and eat away at our budget, sometimes I succeed, sometimes I don't, it is an area that I continue to grow in, and try to find a balance.

I thought I would share about three wonderful books that really help put things into perspective, in regards to our material possessions. 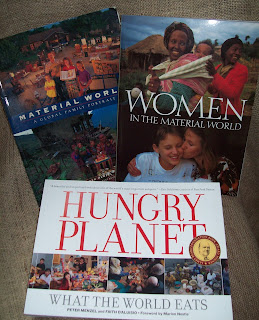 The first one is called Material World- A global Family Portrait by Peter Menzel , I really enjoy this book.  The book looks at typical families from various countries all around the globe, it lists average income, size of home, and then includes wonderful pictures of actual family's homes, and then brings all of their possessions outside and you can see everything in one picture.  The book was made in 1995, so the American page looks a little outdated, but swap out the TV for a flat screen, add some more ipods, and laptops, and update the appliances to stainless steel, and you still get the idea, American's have a great deal of "stuff".  People in third world countries have a lot less "stuff", mostly just limited bedding, and a few pots and pans, the houses are smaller, and the families are often including elderly family members.

When I teach my Sunday school class about missions around the world, I often bring in this book to show them how certain cultures live, so they will have a better understanding of the culture we are learning about. (Note of caution- there are a few pages with "national geographic style" pictures of women in a few of the countries not wearing a top garment, one may wish to cover these pictures with a sticky note to avoid the distraction it could cause.)

This book fascinates me, I love seeing how other cultures live, and you can see how some of our things are just not necessary, I would highly highly recommend this book, your local library may have a copy, and you can also find it at Amazon.


When I was browsing books at Amazon a few months ago, I spotted two other books by the same people, and was excited to have more of this information.  One entitled Women in the Material World, similar in structure to Material World, this book shows pictures, and talks about women around the world, how they live, what their chores and work are like, their place within the community and their rights, how marriages differ country to country.  Another truly fascinating book, and a great companion book to Material World.


Then I also found another book, also by the same people, Peter Menzel and Faith D'Aluisio, called Hungry Planet, and as you might guess, deals with food around the world.  This book also has amazing pictures, and also goes through what a family eats in a week, and lays it all out in one big picture, as well as the the cost of the food, and it breaks it down into how much is spent of beverages, water, grains, proteins, etc.  along with a special recipe from each culture.  This book is very interesting to read, you can see some of the various struggles, as well as how even though we have more access to various foods, our diet is not the healthiest, and would probably benefit from some simplifying, and more produce.  As someone who is always trying to improve the food I feed our family, and stay on a budget, this book was very inspiring.

I have read many other books on the topic of simplicity, the nice thing about these three books are the pictures, "a picture is worth a thousand words" holds true here.

I will leave you with one of my favorite bible verses on the subject of "stuff".

"Do not store up for yourselves treasures on earth, where moth and rust destroy, and where thieves break in and steal. But store up for yourselves treasures in heaven, where moth and rust do not destroy, and where thieves do not break in and steal.  For where your treasure is, there your heart will be also."
Matthew 6:19-21

Posted by April's Homemaking at 12:33 PM