For this week's 52 Weeks of Fairy Tale post I have chosen the very well known fairy tale- Snow White and the Seven Dwarfs.  This was an especially fun tale to craft for, I have been looking forward to making all seven dwarfs as well as Snow White. Last week my back was not in a crafting mood, so I was delayed in getting started, I was very happy to finally finish up today.

Snow White is a well known fairy tale, most people are familiar with the Disney version, I will be sharing the slightly different Grimm's version. ~ 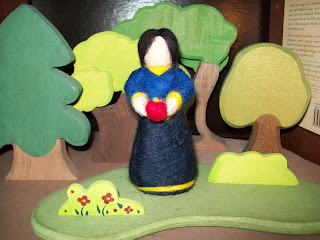 The Queen orders a huntsman to take Snow White out into the woods and kill her, and as proof to bring back her lungs and liver ( in other versions it is the heart).  The huntsman, upon seeing Snow White's beauty, falls in love with her, and cannot kill her, he tells Snow White to run away and hide from the evil queen.  The huntsman kills a boar (in some versions a deer) and brings its lungs and liver to the queen.  However when the queen again questions her mirror, and it still answers that Snow White is the prettiest, the Queen knows she has been tricked.

Meanwhile, Snow White comes upon a small house in the woods, it is the home of seven dwarfs. 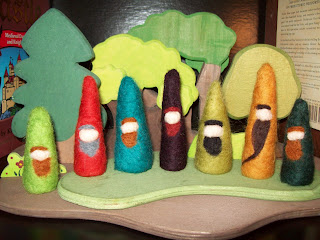 The seven Dwarfs agree to let Snow White live with them, in exchange for her cooking and cleaning. 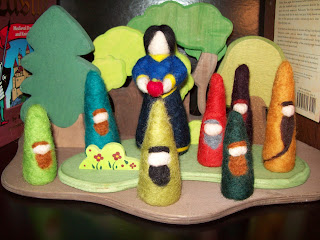 This time the dwarfs do not arrive home in time, and are unable to save their beloved Snow White.  They build her a glass coffin, as Snow White still looks as beautiful as when she was alive, and looked as if she was  only asleep.  Some time passed, and a Prince happened upon the Dwarf's cottage, he saw Snow White in her glass coffin, and fell in love with her.  He begged the dwarfs to let him have her, as he loved her so much.  The Dwarfs could see how the prince loved Snow White, so eventually they decided to let the Prince keep Snow White in her glass coffin.

As the Prince's servants are carrying her away they stumble upon a root and Snow White is jostled, which causes the piece of poisoned apple to dislodge from her throat, and she wakes up, alive again. (Of course in later versions, it is a kiss from the Prince that brings her back to life)  Everyone is very happy, and the Prince proposes to her right then.  The happy couple are married.

The Queen once again asks her mirror who is the fairest- this time the mirror answers "You, my queen, are fair; it is true.  But the Young Queen is a thousand times fairer than you."

The Queen was very angry, and eventually decided to go see who this young queen was, when she went to the wedding, she recognized Snow White right away.  As punishment the Queen was captured, and forced to wear red hot iron shoes, and she danced herself to death.

Snow White and her Prince lived happily ever after.


~
I remember reading this version as a child, it has been quite some time since I have seen the Disney version, which I also remember enjoying as a child.

I had quite a fun time crafting Snow White and the seven dwarfs- Originally I was going to sew a wire framed Snow White doll, but I realized I didn't have black doll hair, so then I started needle felting Snow White.  I love how needle felting is almost like modeling from clay, each project takes on a life of its own.

I gave Snow White a red apple, her dress is trimmed in yellow. 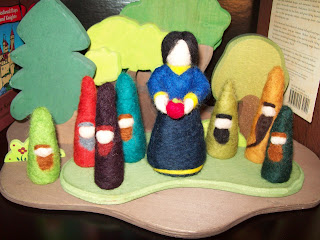 I tied her hair with blue embroidery floss, and gave her a nice long braid. 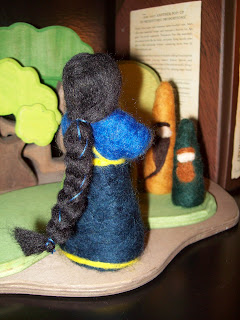 Each dwarf turned out a different size, I decided on a simple shape, and gave them each a different colored outfit, and various beards. 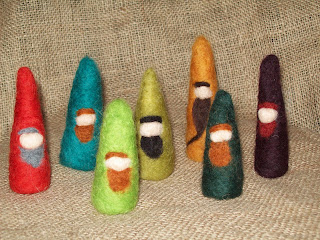 This project was quite a lot of fun needle felting and took a couple of days and quite a few hours to complete.  I loved working with all of the different wool roving colors.  Needle felting is one of my favorite crafts, and I highly recommend it to anyone who enjoys fiber arts projects.

Tomorrow, in order to catch back up with my fairy tale posts, I will be sharing another Grimm's story with a very similar name- Snow White and Rose Red.  While researching Snow White and the Seven Dwarfs, I kept coming across this Grimm's tale, which is a completely different character and story, so I thought I would share it for Week #16.

Posted by April's Homemaking at 11:35 PM