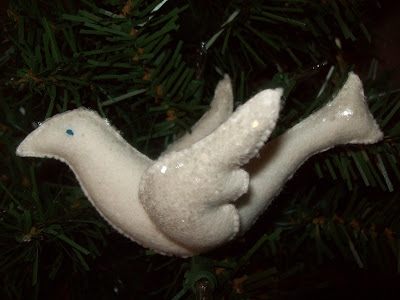 The tale begins on a cold and blustery day, a coach is traveling through the woods when a band of robbers stops the coach to rob it.  During the robbery a girl is able to escape out of the coach unnoticed and runs away into the woods for safety.  The girl ran deep into the woods until she was very far away from the coach.  She realized she had run quite deeply into the woods and was frightened that she was alone in the deep and dark forest., she sat down on a log and began to cry.

As the girl sat crying on the log, wondering how she would ever find her way out of the woods, she heard the flutter of wings above her, and looked up to see a white dove with a small key in its beak.  The dove dropped the key at the girls feet, and told her to look in the tree behind her for a lock which she could open with the key.  So the girl turned and looked in the tree, and found a tiny keyhole hidden in the bark.  She put the key in the lock and opened up a tiny cupboard that held milk and bread.  The girl thanked the dove and ate the bread and milk.

When she was done eating the dove dropped another key at her feet, and showed her another tree with a hidden door.  The key opened up a tiny room in the tree, just big enough for a bed.  The dove told her she would be safe sleeping there. 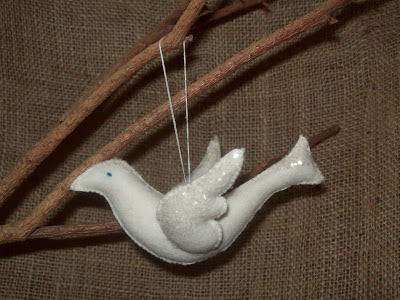 Days passed, and every time the girl needed something the dove would bring a key that would open up another door in a tree with what she needed.  One day the dove asked the girl if she would do something for him.  The girl gladly agreed to help.  So the dove gave her careful instructions, she must follow a path deep into the woods where she will find a small cottage.  In the cottage will be an old woman by a fire, she must not speak to her, and pass by her on her right side, and enter the room behind the old woman.  On a table there will be treasures of rings and jewels, the dove wanted the girl to get the golden ring.

So the girl went and did as the dove instructed, she kept her hand over her mouth so she wouldn't accidentally speak to the old woman, when she came to the table of jewels she did not see a golden ring.  But then she saw the old woman sneaking away with a bird cage hidden under her shawl.  The girl thought the ring must be in the cage, so she quickly snatched the cage from the old woman, and in the cage was a bird holding the golden ring.  The girl gently took the ring, and ran back to the tree where the dove had told her to wait.

The dove was not there, the girl waited and waited, and then she began to cry, wondering where her friend the dove was.  The girl leaned against the tree, and suddenly the tree felt different, it felt softer and as though it was growing arms that wrapped themselves around her.  "Do not cry" said a kind voice.  The tree had changed into a prince.  The other trees around her began changing into people as well.

The prince explained that the old woman was a witch, who had cast a spell on him and his friends, since he was a prince, he was allowed to fly around for two hours a day as a dove.  The prince was her friend the dove!  He explained that when she took the ring from the old witch it had broken the spell.  The prince and the girl fell in love, and became married.  They lived happily ever after.
~

I love this tale, I love the thought of hidden compartments in trees, what a fun thing to imagine.  For my craft, I decided to sew a dove from white wool felt.  I found a basic template online for a bird and modified its tail a bit, then cut it out from felt and stitched it together with a blanket stitch, it is stuffed with wool roving, and I decided to stuff the wings as well.  You can find a multitude of bird patterns by searching online, it is easy to modify them into the shape you need. Here is the pattern I started with- (dove pattern). Because the is a fairy tale bird I couldn't resist adding some crystal colored glitter to the wings, tail, and head, I also added a string so I could use it as a Christmas ornament.  This dove would also be nice with a little key in his beak, so I will have to keep my eye out for one. 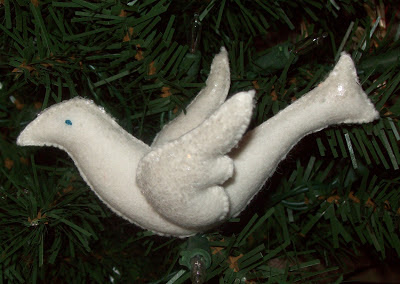 This tale has a few similarities to the fairy tale Jorinda and Joringle which you may also enjoy.

Posted by April's Homemaking at 3:53 PM