For Week # 39's fairy tale post, I am posting one of my favorite spooky fairy tales.  I first heard this tale while watching Fairy Tale Theater back in the 1980's, I had no idea it was a tale from The Brother's Grimm until I began reading about it for this post.  I had meant to share this tale for Halloween, but got too involved with Halloween festivities to finish my craft.  I look forward to sharing it now though.

The tale is called The Youth Who Could Not Shudder, The Fairy Tale Theater Version is called The Boy Who Left Home To Find Out About the Shivers. 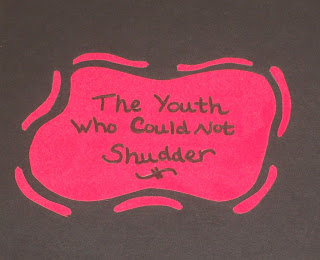 This is a tale of a man with two sons, when the Father asked his youngest son what he wants to do for his future, the boy only cares about learning how to shudder (The young boy has never been frightened before). The young boy is sure that this will be a good thing to learn.

A Sextan came by the House, and when hearing about the boys desire to learn how to shudder, told the father that he would take the boy with him to ring the church bell.  The boy went off, and that evening went to ring the church bells.  The Sextan dressed as a ghost, and stood near the bell tower where the boy could see.  The boy was not afraid, and asked the figure to speak up, after asking a few times, when the ghost didn't answer, the boy thought it was someone up to no good, so he pushed the figure down the stairs.  The next day, it was discovered that it was the Sextan that the boy had shoved down the stairs, and that he had broken his leg.  The boys father was so disappointed in him, he sent his son away with some money to find his own fortune.

Along his way, a man advised him to sit beneath the gallows to learn how to shudder.  The boy didn't find it scary at all, and made a fire under the gallows where men were dangling and swaying in the wind.  Not realizing the men were dead, the boy cut them down, and sat them around the fire to warm up, when they wouldn't converse with him and their clothing caught on fire, he hung them back up since they were so careless.

The King told the boy he could take in three non-living items, so he asked for a fire, a lathe, and a cutting board and knife.

The first night the boy heard strange noises and then was attacked by two evil black cats, which he did away with using his knife.  After that even more evil black cats and black dogs came, the boy was unafraid and got rid of them all with his knife.  He then went and laid down on a bed, the bed started moving around and around, the boy urged it to go faster, and he still did not shudder.  Giving up, the boy went to sleep by the fire.  The King was surprised when the boy was still fine the next morning.

The second evening the boy was visited by ghoulish men, one was even headless, they were playing nine pins with human bones as pins and skulls for the bowling ball.  The boy was unafraid, offered to round up the skulls on his lathe, and played along with the Ghouls, betting some of the money his father had given him.  The ghouls disappeared at midnight, and the boy went off to sleep.  The next morning the King was again surprised, and asked the boy about his evening, the boy said all went well expect for losing a bit of money bowling, and he still hadn't learned to shudder.

The third evening, the boy was visited by six large men carrying a coffin, the boy thought it was his cousin in the coffin, and took the body out and tried to warm it up.  When the surprised body came alive, it was violent with the boy, the boy was upset with its ingratitude, and put it back into the coffin.  Then a man with a long beard appeared, and bragged that he could knock and anvil into the ground, the boy tricked the old man, and caught his beard in the anvil, and then tormented the old man until the old man begged for mercy and agreed to show the boy the castle treasures.

The boy survived the third night, and as agreed, married the Kings daughter, although he was still disappointed that he had not learned to shudder.  The boys wife was tired of hearing about her husbands desire to learn how to shudder, so one night, while her husband was sleeping, she had her servants fetch a pail of cold water along with fish, from the stream.  When they were back, she tossed the cold fishy water on her sleeping husband, he awoke with a shudder, and was very glad that he finally learned what it felt like to shudder.

For this weeks craft, I decided to do a paper cutting of my favorite scene in this story, the bowling scene.  This was a harder tale to craft, so I kept the paper cutting simple. 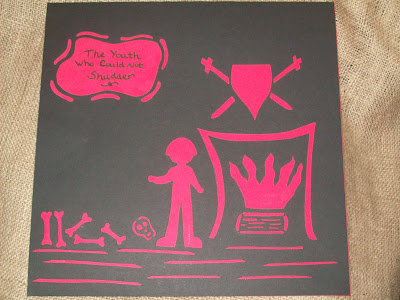 This tale was one of my favorite Fairy Tale Theater Episode when I was younger, you can watch it on YouTube   You can find the entire Fairy Tale Theater Series on Amazon as well, I enjoy watching it from time to time, it brings me back to my childhood.  I will suggest that it is better for older children, as some of the tales are a little spooky, you might want to preview it first before showing it to more sensitive children, I was probably around ten to twelve when I enjoyed it most.  A fun series to have along with your study of fairy tales!

You can also view my Week #38 Fairy Tale Post - The Emperor's New Clothes that I finished this morning.

Posted by April's Homemaking at 4:52 PM