For 52 Weeks of Fairy Tales Week #31's  fairy tale, I was inspired at the county fair. 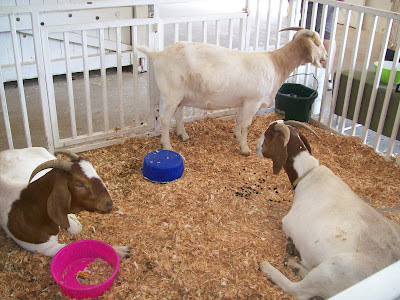 So I thought I would share the Norwegian fairy tale, The Three Billy Goats Gruff.

This story is about three billy goat brothers, they have run out of grass to graze on, and must cross a bridge over a stream to get to a lush meadow on the other side, where they will have plenty to eat.  Unfortunately a horrible and mean troll lives under the bridge, and eats anyone who crosses.  The smallest billy goat crosses the bridge first, and as soon as he is part way over the bridge, the troll jumps out and threatens to eat him up.
The littlest goat explains to the troll that he is very small, and if the troll just waits, a larger goat will be along shortly, and the larger goat would make a  better meal.  So the troll lets the smallest goat across the bridge.

Snip, Snap, Snout.  This tale's told out.  ( This was the classic ending included in some versions of the story, I thought that it was fun.)

This is a very fun story to tell, there are many different versions online, as well as some fun animated versions on YouTube.  You can use these online sources to come up with fun ideas for telling the story yourself. This would also be a fun story to tell in conjunction with exploring various bridges.

For my craft, I decided to do another paper cutting for our fairy tale scrapbook. 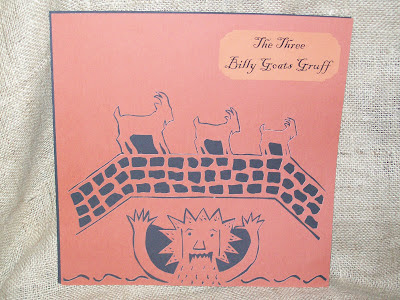 Here is a close up of the cut out image, I drew on my design, the goat shape I found online and reduced the picture a few times to get the different sizes of goats and cut them out and traced them above the bridge and troll, then cut out the design and mounted the cut out paper to a black sheet of 12 by 12 card stock.  The tricky part of paper cutting is thinking through what you want cut out, and how that will look, and also not cutting so close to the edge that you almost cut the paper in half.  :)  I really enjoy this type of crafting, and our fairy tale scrapbook is coming along nicely. 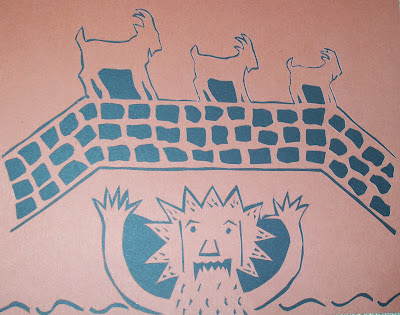 I also think this story would be fun to make shadow puppets for like I did for the fairy tale The Three Spinners.    The Three Billy Goats Gruff is one of those wonderful classic tales that I grew up hearing, and it is nice passing it down to my children, both of my kids are teens now, but with pop culture so full of fairy tale inspired books, TV shows, and movies, it is nice for them to know the classics.


Posted by April's Homemaking at 5:33 PM