This week I am focusing on two fairy tales that both have Ravens as a significant part of the tale.  Both of these stories where new to me, and I came across them in my Grimm's Fairy Tale book.   These two tales also share another theme, that of a parent's harsh words causing a change to their children.  Both tales were collected by The Brothers Grimm.

The first tale is called The Raven, not to be confused with Edgar Allen Poe's Poem The Raven. 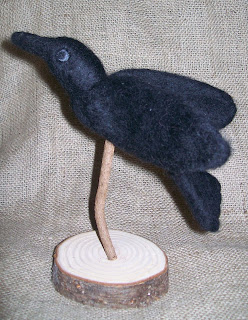 In this tale a Queen has a very young daughter, and one day the child was naughty and would not be quiet.  The Queen became impatient, she looked out her window and saw ravens flying around and said, " I wish you were a raven that you might fly away, then I should have peace."  As soon as she said this her daughter turned into a raven and flew out the window into the woods, and her parents never knew what happened to her.

Some time later a man was riding through the forest, and heard the raven.  The raven told the man she was an enchanted princess, and that he could help break the spell.  He agreed to help.  So the raven gave him his task, he must go to an old woman's house in the woods, when he is there he must not eat anything the old woman offers or he would fall asleep and be unable to meet the princess when she came by to be transformed back into a human.

The man promised he would not eat anything, but when he got to the old woman's cottage, he gave in, and had a sip of drink, then fell asleep.  For three nights he repeated this, and was unable to help the princess break the curse.  On the third night, when the princess came by, seeing that this was not the way she would break the spell, she gave the man a magical loaf of bread, and magical bottle of wine that would never run out, along with her ring and a letter explaining another way to break the curse.  The man would have to find his way to The Golden Castle of Stromberg and save her there, unfortunately he didn't know the way, but he set out to find it.

He came to a giant who threatened to eat him, but instead the man gave him his magical bread and wine, and the giant was satisfied.  The giant also happened to know the way to the Golden Castle, and showed the man on a map, then the giant offered to carry the man all the way to the castle, as it would only take the giant a couple of hours to walk there.  When the man arrived, he saw the enchanted princess riding around the castle in her carriage, however, the castle stood on top of a glass mountain and the man could not climb up it.    He built a hut at the bottom of the mountain and lived in it for a year, he saw the princess every day riding around the castle, but could never get to her.

One day he overheard three robbers fighting and went to see what the fuss was about.  The robbers were fighting over a stick that could open any door with its touch, an invisibility cloak, and a horse which could go anywhere.  The man told the robber he had something of value that he would trade them for the three items, but first he had to try the items out.  So he got on the horse, took the stick, and put on the cloak.  He gave the three men a beating and told them they got what they deserved, then he rode up the glass mountain.  He touched the castle door with the magic stick and went inside.  He was still invisible and went to where the enchanted princess was standing by a goblet, and dropped her ring into the goblet.  When she saw her ring, she knew it was from the man, and her curse was broken.  The man had gone outside with his horse, and had taken off the invisibility cloak, when the princess saw the man she kissed him and thanked him for saving her.  The next day they were married.

For The Raven I needle felted a raven, it was tricky to get the shape right, and I didn't have the supplies or patience to make wired feet, so I went with a more folk art look and used some of the wood I saved from our Christmas tree, and Gary drilled and cut it to the right shape for a stand for me.  This raven will work perfectly in my fall and Halloween decor also.


Here is a side view of my needle felted raven, I did some needled detail in the tail feather. 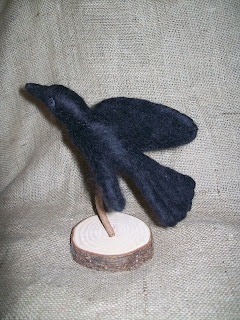 I really love how the stand works with the bird - Thanks Gary! 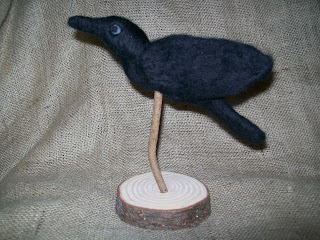 The next tale also has to do with ravens this time there are seven.  This tale was also collected by The Brothers Grimm and is called The Seven Ravens. 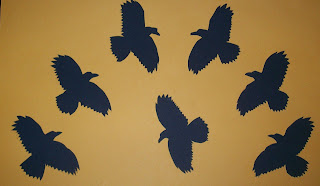 There was once a man with seven sons, and no daughter, one day his wife gave birth to a beautiful little girl.  The girl was very small and weak, and had to be christened at home.  The seven brothers ran to fetch water from the spring, each running as fast as he could so he might be the first to get to the water.  When the boys arrived at the well, they accidentally dropped the pitcher into the spring.  They didn't dare go home, and didn't know what to do, so they stood there.

The father became impatient, and worried that his fragile daughter might die unbaptized, he assumed the boys had started playing and forgotten their sister's christening.  He became angry and cried out that he wished his sons would all turn into ravens.  As soon as he said the words, he saw seven ravens flying away.  The parents were very sad, and could not find a way to break the curse.  Fortunately their daughter grew stronger and more beautiful each day.  The girl did not know that she had brothers, her parents never told her, until one day when she over heard people talking about her.  They said that although the girl was very pretty she was to blame for her brothers misfortune.  The girl became very sad  and asked her parents for an explanation.  They told her that her brothers had been turned into ravens, and that it wasn't her fault.  The girl could not stop thinking of helping her brothers, and secretly set out to find and free her brothers.

She came to a gate at the glass mountain and reached into her pocket to retrieve the bone, but the bone was gone and must have fallen out.  She was still determined to save her brothers (and here is an icky part of this tale) so she gets out a knife and cuts off her small finger to use in place of the bone as a key to the gate. ( In the Greek version of this tale she doesn't loose the key which is a bat bone, I think I would use this version if I was telling the story to little ones, but for adults and teens the cutting off of her own finger shows how much she is willing to sacrifice for her brothers, and her love for them)

She enters the mountain, and meets a dwarf, who serves the seven raven brothers.  He welcomes in the sister.  The little sister eats a few crumbs from each of her brothers plates, and takes a sip from each of their cups, then drops her ring into the last goblet.  Her raven brothers return, and see their food has been eaten, the seventh brother drinks from his goblet, and finds the ring.  They know it is from their parents, and hope it is their sister who has finally come to break the curse.  The sister hears her brothers, and comes into the room, when they see her, the curse is broken, and they all hug and kiss, and happily return home.

For The Seven Ravens I decided to do a paper cutting.  I traced and then cut out the design on yellow paper and the glued it down over a piece of black scrapbook paper to create a nice page of The Seven Ravens for our fairy tale scrapbook.  It was a lot of detailed tiny cutting on the raven wings, but I am happy with the results. 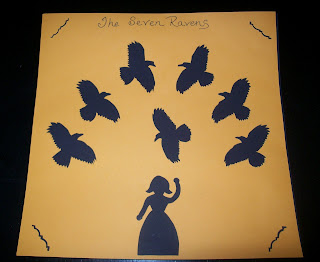 I think it is very interesting how these two stories share so many similarities, the curse of an impatient parent, ravens, as well as glass mountains, and goblets and rings.  There are other tales with glass mountains, it would be interesting to figure out the significance of a glass mountain in all these tales, and what it meant to the people originally telling these tales.  What are your thoughts?

Posted by April's Homemaking at 1:13 AM