I grew up hearing this story many, many times, and could tell it by heart from a very young age. This tale is believed to be of English origin, you can read a lot of interesting information about The Three Little Pigs at Wikipedia.

In the tale of the three little pigs, mother pig sends her three children off into the world to seek their fortune. All of the pigs started out by building a house.  The first pig built his house of some inexpensive straw that a farmer had. 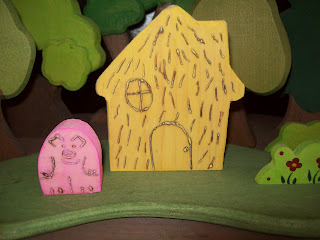 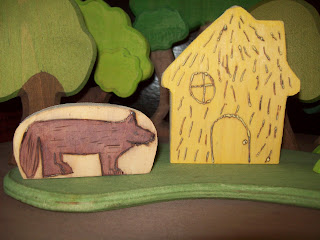 Luckily the first pig was able to escape, and make his way to his brother's house.  The second pig had built his house out of sticks. 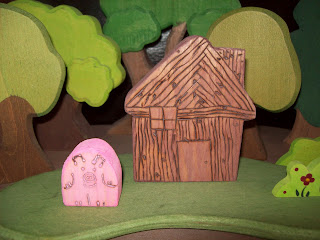 Once again, along comes the big bad wolf.  Again he says "Little Pig, Little Pig, let me come in!"  to which the pig replies, " No, No, not by the hair of my chinny, chin, chin!"  Again the wolf wolf threatens, " Then I'll huff, and I'll puff, and I'll blow your house in!"  The wolf is able to blow down the house built of sticks, luckily, the second pig also escapes and runs off to the third brother pig's house. 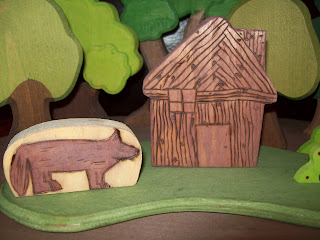 The third pig has been more industrious, and has taken his time to build a sturdy house of bricks.  When he sees his brothers, he welcomes them into his house. 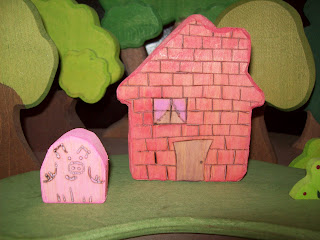 Along comes the big bad wolf, who once again knocks on the door and says " Little Pig, Little Pig, let me come in!"  again pig replies, "No, No, Not by the hair of my chinny, chin, chin!"  and again wolf says, "Then I'll Huff, and I'll Puff, and I'll blow your house in!"  The wolf tries to blow down the brick house, but the brick house is sturdy, and the wolf is unable to blow the house down. 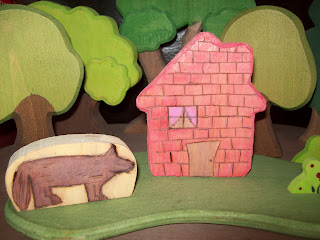 The wolf tries to trick the pig out of the brick house, and tells the pig he knows of a lovely field of turnips, and to meet him there at six.  The pig is smart, and arrives at five, and is back home with his turnips, wolf arrives, and finds the pig has tricked him.  The wolf tells the pig of a nice apple tree, and says he will be earlier the next day, again the pig is earlier than the wolf to get his apples, but the pig was still up in the tree when wolf shows up.  The pig outsmarts the wolf again by distracting him by having the wolf catch some apples he throws down. While the wolf tries to pick up the apples the pig has thrown, the pig jumps down and makes it back to his house.  A third time wolf tries to trick the pig, and tells him of a fair that they could meet at.  The pig gets to the fair early and buys a butter churn, on his way home, pig spots wolf on his way and becomes frightened.  So the pig jumps into the butter churn, and the butter churn, with the pig inside, rolls all the way down the hill.  Once again pig has escaped the big bad wolf.

At this point the wolf is very angry, and has had enough, he wants to eat that pig!  So he climbs up the roof to climbs into the house down the chimney.  Pig knows that this is the wolfs plan, so he lights a fire, and puts on a large kettle of boiling water.  When the wolf comes down the chimney, he lands in the large kettle of boiling water.  The pig puts, the lid on thee kettle, and boils up the wolf and eats wolf stew!  All three pigs live happily ever after.

Originally for my fairy tale craft this week I was going to needle felt three little pigs, but then I got to thinking I wanted houses as well.  So I asked my hubby, if he could cut me out some wood house shapes that I could try out my new wood burner on.  Then I decided I would make some simple wooden pigs and a wolf as well, so Gary made me up some nice wood shapes to craft with.  Gary and I have been wanting to experiment more with making wooden toys and figures, so we thought we would start practicing. 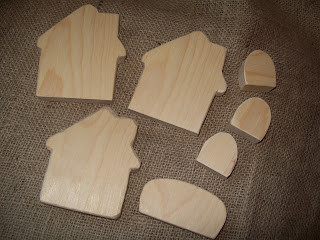 I wood burned a simple image onto each woods piece. (Still need to work on my wood burning technique.)
Then used some water colors to give the project color.  Eventually I would like to coat it with a polish of some sort, like a beeswax polish. 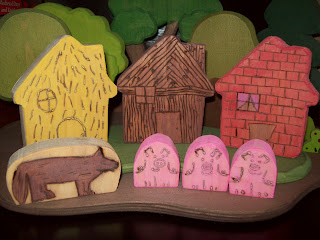 I really enjoyed working on a project as a team with Gary, we hope to reorganize a section of the garage for woodworking, which will be nice.

If you would like to read more of my 52 Weeks of Fairy Tale posts you can find them in the labels list on the right side of my blog.  You can read my recent post on our green pea harvest and the delicious crostini we made with it here.  The garden is doing very well, and we are in the midst of blueberry harvest, I am hoping to do a garden update post this weekend.  Getting ready to enjoy a nice productive weekend. :)

Posted by April's Homemaking at 4:21 PM