This was the first year that I have gotten out to the garden early enough in the spring to grow peas, and I was excited to see how they would do.  I used to grow them with my grandma, she would give each of the grand kids their own side of a tripod to plant peas, and later in the season we would all sit around shelling fresh peas. 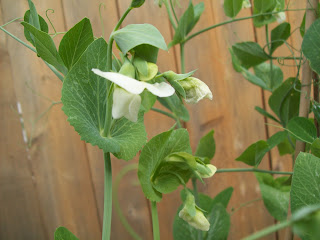 I grew them in large buckets with bamboo tripods, and at first they did pretty well.  I probably should have thinned them out a bit more (thinning is something I really need to work on), but otherwise they were growing well and pea pods started to appear.  The I noticed that they were being attacked by a pest, and not doing very well, after some research I realized it was the pea weevil.  The only way to get these out of your garden is to not let their life cycle come full circle, so I decided to harvest the few good peas that were left, and discard the rest.  Next year I will plant them in a different location, and try again.

We did get a small little harvest though, and it was fun to shell them with the kids, even though they are teens, and we have gardened every year, they didn't have hands on experience with shelling peas, and it was a great experience.  We had to shell them very carefully to check for any bug issue, before we started I explained about the pest, we examined the plants for the different stages of the weevils life cycle. 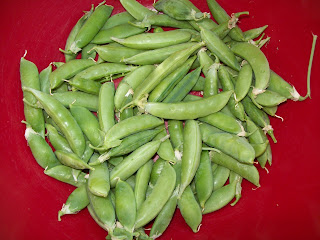 Shelling them so carefully took awhile, and it was great to have the kids thinking things like how the shelling process might be done by commercial pea growers, and how many you have to shell to get the equivalent to a bag of frozen peas.  It was a good learning experience.

We ended up with probably less than a cup full, but they were pretty green fresh peas, and I wanted to make something special with them so we could all experience that fresh pea taste. 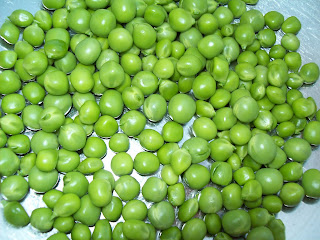 I had been thinking for awhile about a Green Pea topping for crostini, and researched quite a few recipes, most called for olive oil, and garlic and such, but I really wanted to just taste fresh peas, so I came up with a very simple recipe, and it turned out delicious. 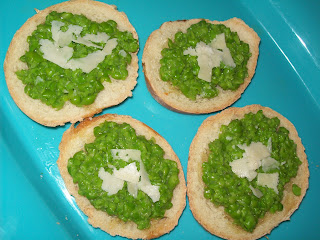 Ingredients:
Fresh shelled peas (it wouldn't be as fresh tasting, but we all enjoyed this recipe so much I will have to make more using frozen peas)

Clarified Butter ( to make it quickly, I just microwaved half a stick of butter for a minute or so, until I could see the solids separating from the oil, I just let the solids settle to the bottom, and used a spoon to scoop out the clarified butter)

Cook peas in boiling water until bright green, don't overcook, just long enough so the peas are tender cooked, the fresh peas took only around five minutes, frozen would take a little longer I would imagine.

Scoop peas out immediately with a  straining spoon, and transfer to a mini food processor.  I added about 2-3 tablespoons of clarified butter and a twist of fresh ground sea salt, you would want to adjust for the amount of peas you have.  Pulse the food processor until peas have a chunky puree, you can still see lots of larger bits of peas, you don't want a complete puree, just enough to mix in that delicious butter, and give it a nice consistency to top crostini.

Brush on a little clarified butter to the toasted baguette slices, then top with pea mixture, then add flakes of Parmesan.  Serve right away while the pea mixture is still retaining some warmth. 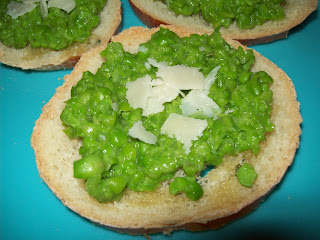 We had just enough mixture for four crostini, one for each of us.  The butter and sea salt and parmesan really  went well with the delicious fresh pea taste. 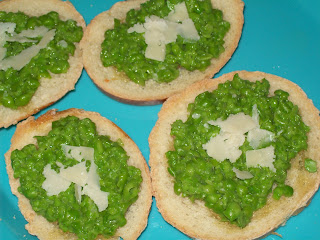 This was a fun special recipe to showcase our tiny little crop of peas, definitely worth the effort of growing and harvesting.  I hope everyone gives this easy recipe a try, perfect for a summer appetizer.

Posted by April's Homemaking at 3:09 PM