With all of the summer activities and celebrations I have had very little time to get to my crafting and fairy tale posts, sorry for the delay.  Finally I am beginning to catch up, and enjoyed a little time painting and making two different fairy tale scrapbook pages for weeks 25 and 26 of my 52 Weeks of Fairy Tales.

I have chosen two tales that focus on kind and unkind girls, this is a common theme in fairy tales, and in reading about the first tale I discovered a few other fairy tales in this category that I had never heard of before.

For week #25 I have chosen the tale called Diamonds and Toads. This tale was written by Charles Perrault and was originally called "Les Fee" (imagine an accent mark over the first e) or "The Fairies", and later became known as Diamonds and Toads.  I first read this tale earlier this year when I came across it while researching other fairy tales, and I really enjoyed this classic fairy tale.

The tale of Diamonds and Toads is about a unkind window and her two daughters.  The old widow's eldest daughter is conceited and rude and very much like her mother, she is her mother's favorite child.  The younger daughter is much like her late father, and is a very kind and helpful girl, both her mother and her older sister are very mean to her.  One day the kind youngest daughter is about to draw water from the well and an old woman asked for some water, the kind girl promptly and sweetly got the old woman some water.

Since the old woman was actually a fairy in disguise, she gave the girl a magical gift, every time she spoke, a diamond, pearl, gem or flower would fall from her mouth.  When the girl arrived home, and her mother saw that diamonds and pearls and flowers were falling from her younger daughters mouth she wanted her eldest and favorite daughter to have that gift as well. 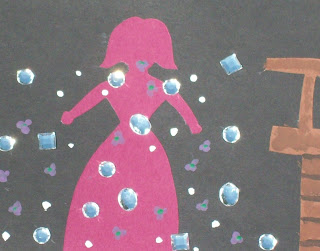 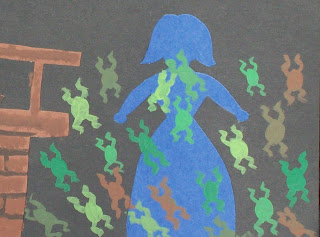 ~
My craft for this fairy tale is a page for our fairy tale scrapbook.  The two girls and the well are cut from paper, and the details are painted on. It took my quite awhile to decide how to make the toads, but I finally learned a simple way to draw the little toads, the diamonds are fun, self stick little clear gems I found at the craft store. 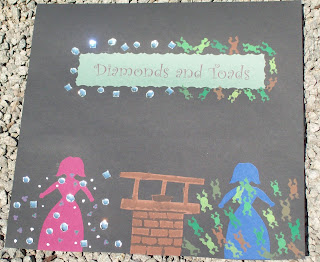 For Week #26 I read a tale that I learned about while finding information on Diamonds and Toads, it is a similar tale in which there is a good and bad sister, and is called Mother Hulda. I had never heard this tale until today, and really enjoyed it. This story is of German origin and told by the Brothers Grimm. 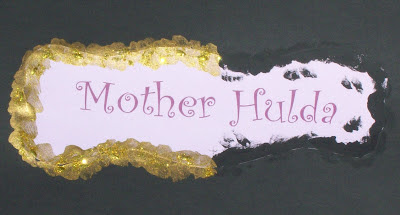 Again this tale is about a widow and her two daughters, one daughter was pretty and industrious and the other was ugly and lazy.  The ugly and lazy daughter was the mother's biological daughter and the favorite. The widow's stepdaughter, who was very hardworking and kind, was made to sit all day by the well and spin until her hands bled.  One day the daughter's hands were bloody from so much work and the spindle became bloodied, the girl went to the well to clean the spindle and it fell in.  When her mother found out she had lost the spindle, she made the daughter go into the well and get it.

When the girl went into the well she found herself in a meadow, she began to walk around and came upon an oven of bread, the bread called out to the girl to remove it from the oven as it was about to burn, so the girl took the bread out right away.  Next she came to an apple tree that asked the girl to shake out the ripe apples, so she did right away and stacked them neatly.  Next she came upon a house, and a women with large frightening teeth came out, at first the girl was frightened.  The woman was kind however, and told her that she was Mother Hulda, and that the she would like the girl to live with her and work for her.  So the girl lived with Mother Holda for quite some time, being very helpful and doing good work the entire time.  One day the girl became home sick, and asked Mother Hulda if she could go home.  Because she had done so much work, so well, for Mother Hulda, Mother Hulda let her go home, and sent her home covered in gold.

When the kind daughter arrived home she was well received because of her gold. 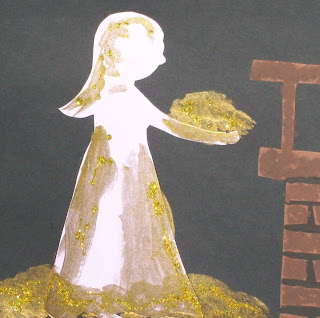 The widow wanted the same gift for her favorite daughter as well, so she made her favorite daughter prick her finger on a thorn and bloody the spindle, and drop it into the well.  Then the lazy daughter jumped right into the well.  She also landed in a meadow, and walked along coming to the bread in an oven.  The bread asked the girl to remove it before it burned, and the lazy girl didn't want to get soot on herself, so she said no.  Next she came upon the apple tree asking for the girl to shake off the ripe apples, the lazy girl said she didn't want an apple to fall on her head, so she left the apple tree without helping.  She came to Mother Hulda's home, and was not afraid of her teeth as she was told what to expect.  Mother Hulda offered to have the girl live and work with her, and for the first day the lazy girl did actually work, but over the next few days the lazy girl stopped working. Then wouldn't even get out of bed.  Mother Hulda decided to send her home, and when the lazy girl went to the doorway to leave, she thought she would get showered with gold as well, but to her dismay, she was covered with a kettle of pitch. 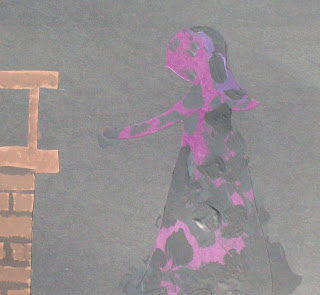 When she arrived home, the pitch stuck to her, and for the rest of her life it could not be removed.

I made another page for our fairy tale scrapbook for this tale as well, this time instead of diamonds and toads, it is gold and pitch.  The gold is both painted and glittered on, and the pitch is black paint. 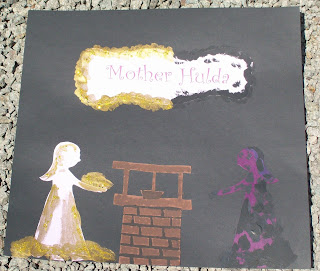 I had fun with both of these stories, and they would be fun to tell together.  I enjoyed paper crafting and painting today, it was nice to be able to spend some time crafting.

Now I'm off to harvest some peas and blueberries from the garden, and I hope to spend time this evening needle felting for the next fairy tale.  Hope everyone is enjoying a nice summer day!

Posted by April's Homemaking at 3:19 PM