I have been reading a lot of fairy tales this week, I found a new book at the library with some wonderful tales that I am looking forward to crafting and sharing.  Today I read and crafted for one of my favorite fairy tales, a very classic tale that most people are familiar with. Puss in Boots.  Puss in Boots is a French fairy tale written by Charles Perrault.

The tale begins when a miller, who had three sons, passes away.  When he died, he left his oldest son the mill, the second son was left with the donkey, and because nothing else was left, the youngest son was left with his father's cat.

The oldest son was able to grind flour with his mill and sell it, the second son hitched a cart to his donkey and  made money by delivering things.  The youngest son didn't know what could be done with his cat, aside from  the cat purring and drinking milk.

One day the cat told his master to buy him a pair of boots and get him a sack.  The cat convinced the youngest son that he was not as useless as he thought, and so the son brought the cat a pair of boots, and a sack.  From then on the miller's son called the cat, Puss in Boots. 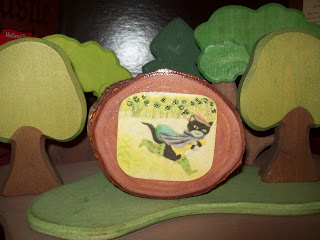 Puss in Boots ran out to the road, in front of the King's carriage, and yelled "Help, Help, My master The Marquis of Carabas is drowning, please save him!"  The King's footmen pulled him out and he borrowed some of the footmen's garments, the miller's son looked very handsome in the velvet jacket and trousers, and the princess immediately fell in love with him.  The princess asked if the Marquis of Carabas could ride in the carriage, and the king agreed.  Puss in Boots excused himself, he said he had something important to do, so he ran ahead.  Along the way, every time he saw peasants working out in the fields, he told them that if the King asks, to tell him that the lands belongs to The Marquis of Carabas.  Each time the King stopped the peasants did as Puss had told them, and the King soon came to think that the Marquis must be a very rich man.

Puss in Boots kept running ahead, and soon came to a large castle that he knew belonged to a wicked ogre. Puss went right up to that ogre, and without showing any fear, asked the ogre "I hear that you can turn yourself into any animal that you wish, I will not believe a story like that unless I see it with my own eyes."
The ogre then changed himself into a lion, and let out a large roar.  The ogre then changed himself back into an ogre, and asked Puss if he believed now.  Puss said to the ogre that he thought it must be easy to change into a large animal like a lion, but that he wasn't convinced the ogre could turn himself into something small, say for instance a mouse.

The ogre was proud of his ability, and didn't want the cat doubting him, so he changed himself into a tiny mouse.  In the blink of an eye Puss in Boots pounced on the mouse, and ate him up!  That was the end of the ogre!  The servants were all so happy because they were now free from the wicked ogre.  Puss in Boots assured them that their new master would be very kind, he told them their new master was The Marquis of Carabas.

When the King reached the castle Puss in Boots was standing with the happy servants.  The King was impressed with the castle.  Puss bowed to the King and said, " Welcome to the home of my master, The Marquis of Carabas."  The miller's son was too astounded to say anything, except to wonder to himself what Puss in Boots was up to.  Puss explained to the miller's son what had happened while the king was getting out of his carriage.  The King was very impressed, and thought the Marquis was a kind and wealthy man.  Soon after the princess and the miller's son were married, and went to live in the castle along with Puss in Boots, they all lived happily ever after.

I just love this story, I love how clever Puss in Boots is, and remember reading this story quite often as a child.  I also loved a 1980's movie version of this tale, featuring Christopher Walken, also titled Puss in Boots.  You can view clips of the movie on youtube, lots of fun songs and 1980's effects.

Here is a link to the movie at Amazon.  This copy is fairly spendy, I bought it awhile back when it first came out on DVD, and was less expensive.  Below is an Amazon link to a collection of 10 fairy tale movies with the same Puss in Boots movie for less than the one.  I am curious what the other fairy tales are like in this collection, and might have to order it.  I will say, this story is not for younger children, the ogre is a little scary, and I remember Sarah and Joseph didn't enjoy this movie until they were like nine or ten.


Of course now a days we have Puss in Boots played by Antonio Banderas of Shrek fame.  I think it would be beneficial to read the original story to children who are fans of this version, so they know the real story of Puss in Boots.  I do think the new Puss in Boots  character is pretty fun and cute though.

For my craft I decided to do a little decoupage craft, I found a vintage image online and reduced the copy down to fit a round wooden slice of last years Christmas tree ( We cut up last year's Christmas tree into various sized twigs and sliced the truck into various pieces, great way to reuse/recycle the Christmas tree, I have enjoyed having it to craft with this year, and will do the same with my future trees!).  First I stained the tree truck wood with purple and tan water colors, when it was dry I decoupaged the paper image onto the wood with Mod Podge.  I gave it a few coats of Mod Podge, and when it was done drying gave the trees a little glitter embellishing.  Here's how it turned out. 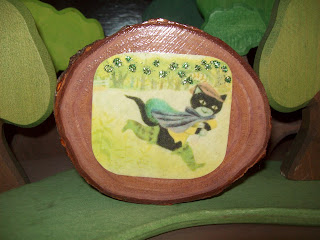 Here is a side view so you can see the side of the bark.  This was a fun project and would be easy for kids to make, it would be fun to make up story sequence blocks like this as well. 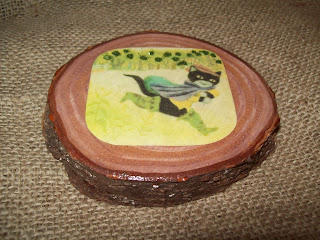 I also thought I would show a little collection of mine, years ago I used to collect Wade Whimsies, mostly the nursery rhyme series, these figures come from England, and they are similar to the figures that can be found in Red Rose Tea (it is always fun getting a little goody in you box of tea).  Over the years I narrowed down my collection, but kept some of my favorites, including Puss in Boots.  Here they are on on a book shelf.  Hickory Dickory Dock, Humpty Dumpty, The House The Jack Built, Doctor Foster, and the Old Woman in the Shoe, and up front, Puss in Boots. 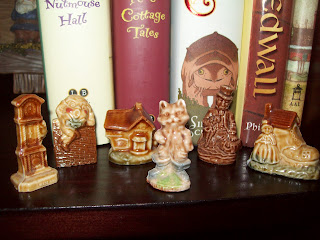 Here is a close up of Puss in Boots. 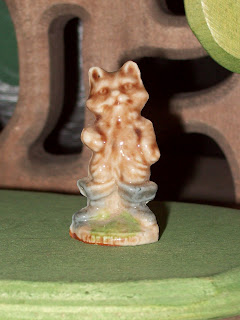 I am hoping to share another fairy tale this weekend so I can start catching up from our relaxing summer.  We have had a busy second week back to school, we had the school open house last night, the weather has been very warm, high 80's, although we did have one lovely day of rain and fall weather which both me and the garden were very happy with.  The warm weather is helping to ripen tomatoes, and finish out the summer garden.  Hope everyone is getting ready for a nice, almost fall, weekend!

Posted by April's Homemaking at 7:56 PM