I was excited to find a new fairy tale book last week with many fairy tales that I had never heard.  The book is called The Fish Bride and Other Gypsy Tales retold by Jean Russell Larson.  These tales were collected by the writer who heard them as a child in the 1930's, in Iowa where Gypsies were camped near the town she lived in during the great depression, as well as stories collected from a family friend in Wales.  The book is full of many wonderful stories and fairy tales, I hope to share a few as part of this fairy tale series. 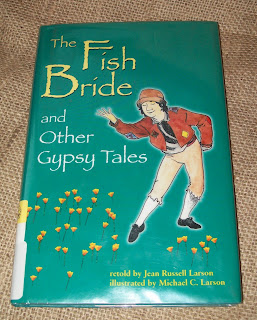 Today I would like to share a simple and fun fairy tale called Noodle.  A "Noodle" is actually a common character in fairy tales, the stories are often referred to as noodle head  stories, about a simple minded character who tends to blunder through the story, sometimes he learns a lesson or comes into good luck.  I shared a story of this type awhile back called Foolish Jack a favorite fairy tale of mine growing up.

There once was a Gypsy boy named Noodle, and he was very foolish.  One day his mother dressed him up in a fine coat and shiny new boots, and sent Noodle into town to sell honey cakes.

Unfortunately Noodle was not a good salesman, and at the end of the day he left town with all of his honey cakes and headed home.  He made his way through a dark forest, and on his way heard the sound of someone in distress.  He soon found an old man sitting by a tree sobbing in the moonlight.  Noodle asked him what was wrong, and the man told him that he lost his purse full of rubles.  The man begged Noodle to help him find his coins.

Noodle, although foolish, was a bit suspicious, and asked the man for proof before he agreed to help.  The man told Noodle that he could tell him that he had exactly 27 rubles in his purse.  That was enough proof for Noodle, so him and the old man began to search for the old man's purse.

After looking further, the old man suggested that they remove their coats so that they could move more freely.  Noodle agreed, the old man removed his old worn out jacket, and Noodle removed his fine coat, and placed it on the ground beside the old man's coat.

They walked further, and then the old man stopped and seemed to be considering their search.  He told Noodle to go on looking further, and that he would go back and retrace their steps just in case they missed something.  Noodle thought that sounded wise, and continued on searching up ahead.

Of course, you can imagine what happened next. The old man did retrace their steps, putting on Noodle's fine coat, shiny boots, and taking the bag of honey cakes.  Then the old man went on his way smiling.

I thought this was an interesting little tale, poor Noodle, I suppose the lesson is be careful who you trust, I would love to hear your thoughts on the moral of this story.

Today, instead of a craft, I decided to bake up the honey cakes from the story.  I looked up many recipes for different types of honey cakes, and settled on the traditional Welsh Honey Cakes, since many of these tales were collected in Wales.  After looking up many recipes, I found that most contained the same ingredients.  Here is the recipe. 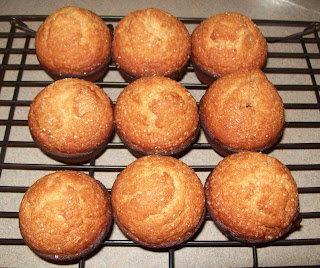 Mix honey, brown sugar, cinnamon, butter and egg yolk until well combined,  then mix in flour and baking soda, and mix until combined adding a little milk as required to mix it all together.  It ends up looking pretty much like a somewhat thick muffin batter.  Then whisk egg white until it reaches a stiff froth, then gently fold into batter.  Bake in a well greased muffin pan, filling the muffin cups half full, before baking sprinkle the tops of each muffin with Sugar in the Raw or course sugar.

The recipe called for baking at 425 F. which sounded quite high to me, the other recipes were in Celsius, so I started the cakes baking at 425 F. which was too hot, my non stick pan browned the bottoms too quickly, and so I lowered the temp to 350 F. to finish the cakes.  In the future I would probably go with 375 F. to 400 F. and check them often.  They took roughly 15 minutes to bake, but at the lower temp might take longer.  Although these little honey cakes turned out a little dark, they tasted delicious, you could definitely taste the honey, they would be great with coffee or tea.

Welsh Honey Cakes, also known as Tiessennau Mel, seem to be a very traditional recipe.  One variation I saw was to not fold in the whisked egg white, but rather to bake the muffin first, then top it with the meringue and sugar and bake until the meringue is browned, I chose not to make that version, because it didn't seem like a cake that Noodle would have been able to put in a sack to sell, it would be interesting to try another time though.

The story of Noodle reminded me of the times my grandma tells of when she used to bake cinnamon rolls and bread to sell to earn extra money when her children were young (she is a wonderful baker), she would send my uncles out to sell her rolls in the neighborhood, thankfully they were not like Noodle.  :)

I have had a busy week, my washing machine broke mid-wash, so our machine sat there not moving with a tub full of soapy water and clothes.  It was quite a process to wring out the clothing, the whole family got in on the action. We rung out the clothing, then brought them to the bathtub, which I filled with warm water to rinse the clothes out.  Of course the load of laundry had my daughter's green team club shirts in them that were needed the next morning for a presentation she was doing, so we had to get them rinsed so they could be dried by morning.  After rinsing the clothing as best as we were able, we rung all of them out and transferred them back to the laundry closet to be dried.  Quite a job!  We were all working away at it and really appreciating modern washing machines, you would get very strong washing clothing by hand!

Today, hubby and I siphoned out the water from the washing machine, which was also an interesting task, I had no idea how much water was used for each load!  Luckily I have a very handy husband, who loves fixing things, he took the machine apart, and we were hoping it would be an inexpensive part.  Turned out that a very tiny sock had been sucked into the hose and was blocking the draining mechanism.  Gary was able to pull them out with pliers, put the machine back together, and I was very happy to have my machine up and running.

I am looking forward to the first day of fall this weekend, the weather is still very hot around here, and hardly a rain drop in sight, but the nights are cooler, and getting darker earlier, there was a beautiful crescent moon in the sky tonight.  I hope everyone is having a nice week!

Posted by April's Homemaking at 9:07 PM