For week #23 of my 52 Weeks of fairy tales posts, I have chosen a tale that was new to me, The Golden Goose. This is a tale collected by the Grimm brothers, and the goose in this story is not to be confused with the Goose that laid the Golden Egg which is a story from Aesop's Fables. 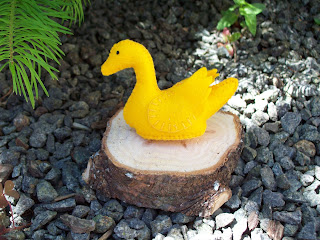 The story of the Golden Goose is about a family of three brothers, the youngest one was given the nickname Simpleton (or Dummling in other versions), and he was picked on by the whole family.  One day the oldest son went out to chop wood, and his mother sent him with a nice cake and some wine.  When the eldest son was out in the forest he came upon a little gray haired man, the little man asked the eldest son if he could have something to eat and drink.  The oldest son did not want to share, so he told the little man "no" and to go away. As soon as the eldest son got back to cutting wood he had a mishap and cut his arm, and made his way home to have it bandaged up.

The youngest son, Simpleton, asked if he could go chop wood, his father didn't think he was capable, but since Simpleton begged, his father finally gave in.  His mother sent him with a cake made with water, and cooked in the coals, and some sour beer.  Simpleton made his way to the woods, and came upon the little gray haired man, who again asked if he could have some food and drink.  Simpleton told the little man that if he didn't mind eating a cake cooked in ash and sour beer, that he would be glad to share, so they sat down and ate together, and the food was magically transformed into a nice cake and wine. 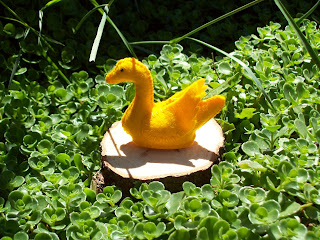 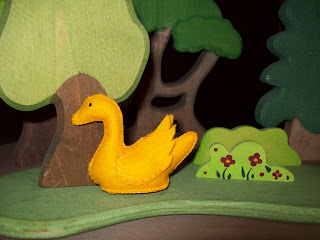 That evening Simpleton went to sleep at an inn, along with his golden goose.  The inn keeper had three daughters, the eldest wanted to pluck one of the golden feathers from the goose, but as soon as she touched the goose she was stuck to it, the second daughter came up, wanting a feather as well, and stuck to the the oldest daughter, then the youngest, despite the warnings from her older sisters, decided to reach out as well, and became attached to her other sisters.

The next morning Simpleton got up and left with his goose, and the three sisters, who were stuck to the goose, had no choice but to follow.  Along the path a parson saw the three girls following after Simpleton and said that they were being very unladylike chasing after the poor man, he reached out to stop the girls and became attached as well.  Then along came a sexton to remind the parson of an afternoon christening, and he became attached as well.  The parson and sexton called out to two peasants working in their field to ask for help, but they became stuck too.  So Simpleton had seven people trailing behind him, and it was quite a sight.

It so happened that he was passing by a kingdom, where the kings daughter never laughed, and the king had made a proclamation that anyone who made her laugh would marry her. So Simpleton brought his Goose along with all seven people attached to the princess, and when she saw the silly sight, she burst into laughter.  So Simpleton asked the King for her had in marriage. 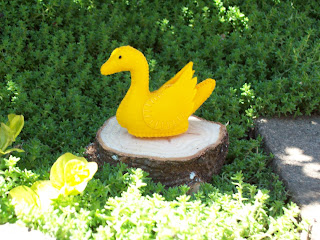 The King didn't want his daughter to marry someone named Simpleton, so he gave Simpleton a challenge that he thought would be impossible..  Simpleton would need to bring to the king a man who could drink the entire cellar full of wine in a day.  Simpleton thought of the little gray haired man, so he went to the woods were he had seen him, and came upon a man who was so sad because he could not quench his thirst.  Simpleton told the man he knew just what to do, so he brought the man to the king's wine cellar, and by that evening the man had finished drinking the entire cellar of wine.

Again the King didn't want to honor his deal with Simpleton, so he gave him another challenge, this time to find a man who could eat a mountain full of bread.  Again Simpleton went to the woods, and this time found a man tightening his belt, and sad because nothing would fill him up.  Simpleton brought the man to the kingdom, where the king had gathered all the flour in the kingdom and had a mountain of bread baked, and the hungry man was able to eat it all.

Again the king didn't want his daughter marrying Simpleton, so he gave him another task, that Simpleton must find a boat that could sail on both land and sea, and bring it to the kingdom.  One last time Simpleton went to the woods, where he found the little gray haired man, this time the little gray haired man was there, and told Simpleton that he had helped him with the thirsty man and hungry man, and now, because Simpleton was merciful to him, he would give him the special boat.  So Simpleton brought the boat to the king, who could no longer deny his daughter to Simpleton.

Simpleton and the princess were happily married.  Eventually the King passed away and Simpleton inherited the kingdom, and him and his wife lived happily ever after.

This was a nice story of an underdog winning in the end, as well as a good story about sharing, and the pitfalls of greed.  This tale reminds me a bit of the tale of Foolish Jack which I posted for Week #12.  Another tale about a Princess who never laughed being won over by a simple fellow.  I am finding many repeating themes in fairy tales as I am reading through them, and I think it is pretty interesting.

With this tale I do find myself wishing to know what happened to the people attached to the Golden Goose, as well as the poor goose, and also what became of Simpleton's family.  I think it would make a very fun story starter for children, I remember a teacher who would read us a story and before reading us the ending would have us write our own ending, and share our version with the class.

For my craft his week I decided to sew up a little Golden Goose, the sun came out so I thought I would get some nice pictures of him outside.  I think it would also be fun to do a paper project depicting Simpleton and his Goose with all seven people following along, but I was in a sewing mood today.  Here is a closer picture of this felt Golden Goose. 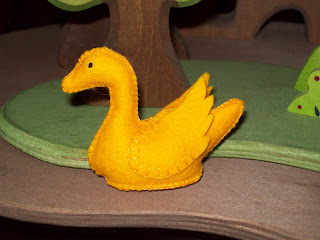 I modified a duck pattern from the book Feltcraft by Petra Berger, I extended the neck, and drew on a beak rather than sewing on a separate one.  He is sewn out of 100 percent wool felt and stuffed with wool roving.  I find my wool stuffing at Weir Crafts and I found wool felt at Magic Cabin.  I love sewing with wool felt verses the acrylic variety you can find in craft stores, because it is much sturdier, and holds its shape better.

Here is my Amazon link for Feltcraft, this book has some great patterns to work with, and I have gone to it many times over the years.

Hope everyone is having a wonderful weekend!

Posted by April's Homemaking at 12:55 PM