Laura E. Richards was born in Boston, Massachusetts in 1850, and was the daughter of Julia Ward Howe, the author of The Battle Hymn of the Republic.  Following the birth of her first child, Laura E. Richards also began writing, and has written many tales for children.  The Tale of The Golden Windows was written around 1903, along with other bedtime stories, and was included in a book of American Fairy Tales that I found at the library a couple of weeks ago.  This is a nice short tale, with a very nice message. 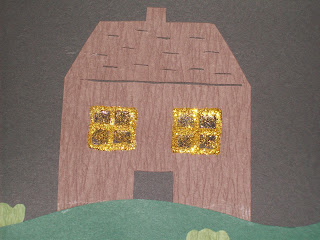 The story of The Golden Windows begins with a young boy who is the son of a poor farming family, he must work very hard all day out in the fields, but come sundown his father allows him some time for himself.  It is at sundown, that the young boy looks at a farmhouse over the hills, and sees that it has windows that shine like gold and diamonds.  The windows were so beautiful.  After a time, the shutters on the windows seem to be closed, and the house looked like a regular farm house, the young boy supposed it was time for the family's dinner.  So he went home and had his own simple supper of bread and milk, and went to bed.

One day, the boys father, who was pleased with all of the hard work his son had been doing, decided to give his son a day off, and reminded his son that God gave him this day, so to try and learn some good thing.  So the boy packed some bread, said goodbye to his Mom and Dad, and headed out for the day to find the house with the golden windows. 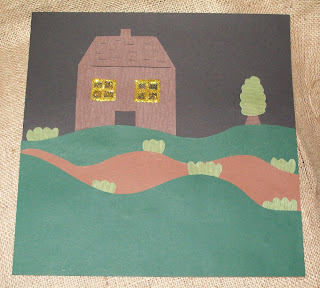 He was barefooted, but the walk was pleasant, part way through his journey he ate his bread, and shared crumbs with some birds.  Eventually he made his way to the house.  When he got there, it seemed the shutters must still be up, because he could not see the golden windows.  When he got closer, he was disappointed, the windows were made of regular glass, and there was no gold around them at all.

A woman came to the door, and asked the boy what he wanted.  The boy explained that he came to see her golden windows, but when he arrived he saw they were only regular glass.  The kind woman chuckled, and explained to the boy that they were poor farming folks, and they would not be able to have golden windows, but that the glass windows worked just fine.  She went and got her daughter, who was the same age as the boy, she was also barefoot, and dressed in a brown simple dress, she had golden blond hair and blue eyes.

The girl showed the boy around her farm, and they talked about each others special cattle, hers with a white star on its forehead, and his that was red chestnut colored and had white feet.  They shared an apple, and became friends.  The boy told her about the golden windows that he had come to find. The girl knew all about the golden windows, and she told him that he must have gone the the wrong way.  So she brought him to show him where they were.

She explained that they could only be seen at sunset, and he agreed, she brought him to a hill, and pointed out across the land, to a house with golden and diamond windows that were shining so beautifully.  The boy saw that it was his own home!

The boy told the girl that he must go, he gave the girl his best pebble, it was white with a red band and he had been carrying it in his pocket for a year, she gave him three horse-chestnuts, a red satin looking one, a spotted one, and a milky white one.  The boy kissed the girl, and promised to some again, but did not tell her what he had learned.  He headed back home, as the girl stood in the sunset light and watched him.

It was a long walk, and was dark when he arrived home, the fire and lamplight almost made his windows as bright as when he saw them from the hill.  When he opened the door his mother kissed him, and his little sister ran to give him a hug, and his father smiled at him from his chair.  His mother asked him if he had a nice day, and the boy said he did.  His father asked him if he learned anything, and the boy replied "Yes, I have learned that our house has windows of gold and diamond!"

I really loved this story, such a nice reminder to see the blessings around you, even when it seems the grass is greener on the other side. You can read the original version here. I had heard a story similar to this a few years back that took place in a city setting, where a boy looked out across the city apartments and saw a golden window, and made a similar journey, it must have been a modern retelling of this story, I remember enjoying that story as well.

For this weeks craft I decided to add another page to our fairy tale scrapbook, here is how it turned out. 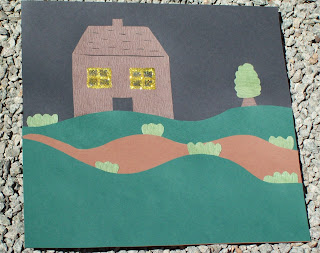 As a side note, in thinking about my Sunday School class, I think this would be a fun story to share when discussing thankfulness, and our blessings.  The verses 1 Thessalonians 5:16-18 comes to mind-

Be joyful always; Pray continually; give thanks in all circumstances, for this is God's will for you in Christ Jesus. 1 Thessalonians 5:16-18

I look forward to sharing this story.  Has anyone else heard this tale before?

Happy Father's Day to all the father's out there, I hope everyone has a nice time celebrating this weekend!

Linking to:
The Magic Onions, Sharing Saturday, Once Upon A Weekend, For the Kids Fridays

Posted by April's Homemaking at 2:16 PM