This last weekend the whole family had various fun activities.  My son, along with his school Drama group, competed at their regional competition, Gary went along as a chaperone.  My daughter attended the school's fund raising dance to raise money for a local family with a medical need.  Sunday the kids watched the Super Bowl with their youth group, and Gary and I stayed home and enjoyed the game at home with a pizza, some hot wings and an apple pie.  It was a fun game to watch.

Monday I was preparing a snack for our bible study, and I wasn't sure what to make, I wanted something easy that wouldn't make much of a mess in my kitchen.  I had a thawed out box of Pepperidge Farm Puff Pastry in the fridge that I was going to use for a Groundhog day treat, but since the whole family was out that day I hadn't used it yet.  I had remembered reading that you could use it to make Palmier Cookies, so I thought I would give it a try.  They were so easy to make I thought I would share the recipe. 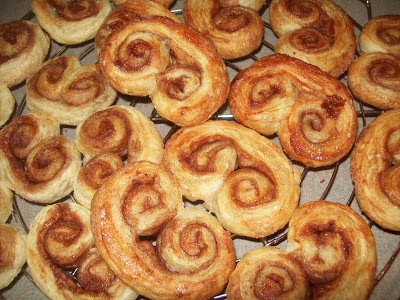 I started with this recipe from Food.com as a guide, but modified it a little to make it even easier.

Lay out a sheet of wax paper on your counter, and unfold one of the sheets of puff pastry, shake a good layer of cinnamon sugar over the entire surface of dough.  Then roll the dough from the short end, like you are rolling up a cinnamon roll, but only roll it to the middle, then start a new roll from the opposite side until they meet, you can see from the shape of the cookie the general idea.  Cut into 12 slices.  I then took each slice and pressed each side into a little pile of more cinnamon sugar, so the whole cookie was held together and had a thin layer of cinnamon sugar on the surface.

Place the slices onto a cookie sheet lined in baking parchment paper, bake for 6-7 minutes, then flip the cookies over and return to oven for 4-6 minutes. Possibly flip one or two more times with another 2-3 minutes per side, depending on how fast your oven is cooking them. Make sure they are cooked through before removing to a cooling rack.  You can keep the second sheet of dough chilled in the fridge until you are ready for the second batch, this recipe makes 24 cookies. My first batch wasn't as cooked through as I would like, so I gave the next batch a few more minutes, and they turned out wonderfully. Definitely keep your eye on them as they get closer to being done, the sugar can burn very quickly.

We all loved these cookies, they were so easy to make, and so pretty, I will definitely have to keep a box of Puff Pastry in the freezer, this is a perfect easy recipe to make for company or just a special family treat!

Today I have begun my garden planning, I have been gathering the seed catalogs as they arrive, and thought I would read through the Farmer's Almanac for fun too.  This year I will be devoting more garden space to greens like Kale and Swiss Chard, I am considering giving some root veggies a try again, I love root veggies like beets, turnips and carrots, but I have difficulty with pests destroying them.  Of course I will pick out a few varieties of summer squash, and various peppers.  I have decided to grow less tomatoes this year, we don't eat very many of them, so I will pick out a few special tomatoes to try.  I am also hoping to plant potatoes this year in potato growing bags, which should be a fun addition to the garden.

I love picking out my seeds and plants every year, I am really looking forward to springs arrival and a new year out in my garden! 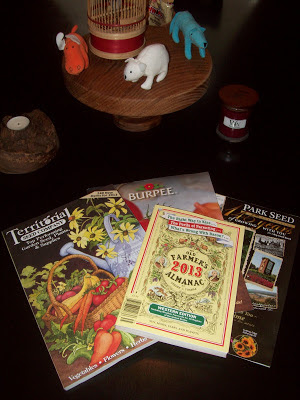 What are you looking forward to growing this year?
Posted by April's Homemaking at 5:48 PM