For 52 Weeks of Fairy Tales Week #45, I have chosen a Grimm's tale called The Turnip.  I had never heard of this tale until I came across it last year in one of my Grimm's Fairy Tale books.  I love learning new fairy tales, so I thought I would share this one. The tale begins with two soldiers who are brothers, one is rich and the other is poor.  The poor man decided to better his lot in life, so he took of his red soldiers coat, and became a gardener.   He sowed turnip seeds, and worked very hard at tilling the ground and tending to his plants.  When the turnips started to come up, one was much bigger than the others, and it kept growing bigger, and bigger, and bigger!  It seemed as though it would never stop growing, it was so large it was like the prince of all turnips, and there has never been another turnip so large since.

At last, it was so big that it filled the cart, and two oxen could hardly pull it.  The gardener was not sure what he would do with this turnip, and whether it was a curse or a blessing.  He didn't think it would be a good idea to sell it, as it would bring no more money than the other turnips, and since the little ones were better for eating, there was no use in eating it.  So, instead, he decided to bring it to the King as a mark of respect.

When he arrived at the King's court, and gave the giant turnip to the king, the king was very impressed.  The king had never seen anything like it, he asked the farmer where he got his seed, and was it his luck that helped him grow it, and if it was luck, that the farmer must be a very fortunate person.  The farmer answered that he was not a very fortunate person, and that he was just a poor soldier turned farmer.  The farmer told the king that his brother was rich, and even the king knew his brother, but he was just a poor man, that no one knew. 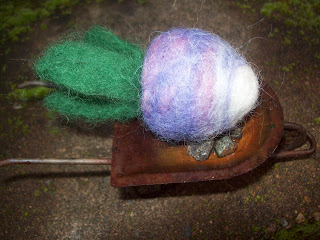 The King took pity on the farmer, and told the farmer that he would be poor no longer, and in fact, even richer than his brother.  The king sent him with gold, land, and flocks, and the farmer became very wealthy.

When the farmer's brother had heard how rich his brother became all because of a giant turnip, he became envious, and decided to think of a way he could increase his fortune.  So he decided that he would get together a gift for the king of gold and fine horses, and if a turnip got such a nice gift in return, he was sure he would be given a much better gift, when the king saw his gift.

He went to his brother, and told him of a valuable buried treasure that he had heard about, and that he wanted his brother to come along and dig it up with them and share the treasure.  Of course this was a wicked plot to lead his brother to the thugs waiting to capture the farmer.  The farmer had no suspicions of his brother's wicked plan so he followed him, and the wicked men grabbed him, and tied him up.  They had planned to hang him on a tree, but soon they heard someone singing down the path, and didn't want to be caught so they quickly put the farmer in a large bag, and hung the bag from the tree, and so the farmer was stuck dangling in the bag.

And that is the end of the tale.

~
I thought that this story was pretty interesting, I do wish there had been some punishment for the wicked brother,and if I was telling this to younger children I would leave out the "trying to kill him" part and switch it to something a little less awful. The ending with the student "learning" by being left in the bag seems a little odd, he was hopefully learning a lesson in being a little less gullible though.  But otherwise I like the idea of the giant turnip, and the poor man making his fortune in farming, certainly a fun thing to think of.

For my craft, I needle felted a turnip.  I love needle felting and have always thought it would be fun to needle felt a set of fruits and veggies.  I decided to blend a few of my pink and purple wools to try and get a more realistic turnip color. 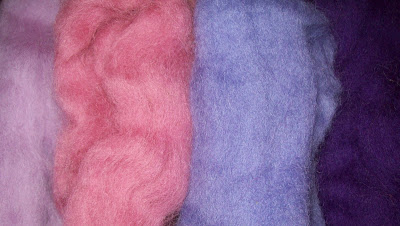 This was a fun little project, and I was glad to have the chance to do a little needle felting, I hadn't done any needle felting since clear before the holidays. Here is my turnip out in the garden with a real turnip plant, I had purchased a turnip awhile back at the supermarket, and waited too long to cook it, so it was a bit too soft, but it had sprouted such nice greens, so as an experiment I planted it out in the garden, and it is doing pretty well, I have never tried turnip greens, so I look forward to giving them a try. 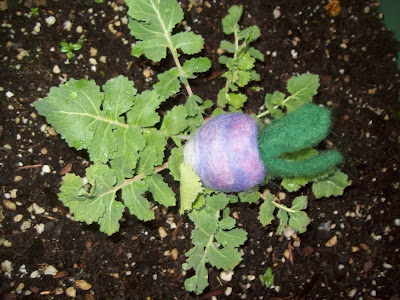 I am looking forward to the weekend.  I hope everyone facing the big storm on the east coast stays safe and warm!

Posted by April's Homemaking at 11:31 PM