Spaghetti Sauce and a Birthday

Last week I had a large harvest of Roma tomatoes, as well as a few very small Early Girl Tomatoes. I usually only grow enough tomatoes that my husband has fresh tomato for his sandwiches, and enough for a few BBQs. This year my Roma's ended up doing pretty well, so I ended up with a large mixing bowl full of tomatoes that I needed to find a way to use or preserve. I decided to try my hand at making a spaghetti sauce straight from the tomato.

Now, I love spaghetti sauce, and any other cooked tomato product, what I can't eat are raw tomatoes, I have a slight allergic reaction to a lot of raw fruits and tomato is high on that list. I am also a bit allergic to the tomato plant, I have to wear gloves when dealing with the tomato plant itself, but I had never had trouble cutting up a few tomatoes. So I set up my boiling pot of water to blanch the tomatoes, and a bowl of ice water to dunk them in after their trip through the boiling water, so I could remove all the skins as well as all the seeds- this went along fine for about the first five tomatoes, then my hands started having an allergic reaction the all that raw tomato!

Here is a picture of my beautiful but pesky tomatoes in the blanching water. 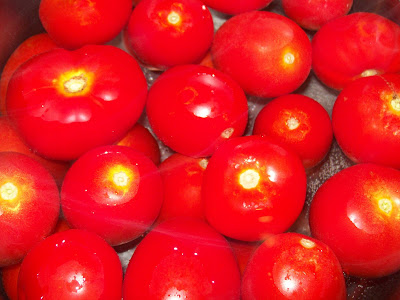 I didn't want to let a bit of itchy hand feeling stop me from working with all my beautiful tomatoes, but unfortunately I was all out of kitchen gloves, so I used sandwich bags for gloves, they weren't very effective. Determined to keep peeling I covered my hands in small kitchen garbage bags, I must have looked a sight, and I was getting tomato juice everywhere, the bags were a bit too big for any precise control, so I ditched the bags, and tried fashioning gloves out of saran wrap- complete fail.

Exasperated, I decided to take a break, half hour later, I returned to my tomato mess, and decided to get a few more of the best tomatoes peeled and seeded as quickly as possible, and then proceed to make sauce with however many tomatoes I had. I probably ended up with about 3 cups of usable tomato, which isn't quite enough to make spaghetti sauce, so off to my trusty pantry to pull out some canned organic crushed tomato to get the sauce started.

Here's the recipe I ended up using-

About 3 cups of my own peeled and seeded tomatoes
2 cans crushed tomato
1 small can tomato sauce
1 small can tomato paste
1 bunch of chopped celery
1 large onion chopped
1 package of white mushrooms, cleaned and chopped
about a third of a bag of frozen crinkle cut carrots
salt & pepper to taste
garlic powder to taste
and lots of Italian Blend herbs to taste
2 tablespoons of brown sugar added toward the end of cooking stir in to dissolve.
Optional- Add 2-3 pounds browned, fully cooked and drained hamburger

I put all of this in the crock pot on high and let it cook all day- now because of the tomato debacle, I got a bit of a late start in the crock pot, and ended up transferring it to a pot on the stove so it would be ready for dinner. I think it would need about 6-8 hours on high to really cook up well. 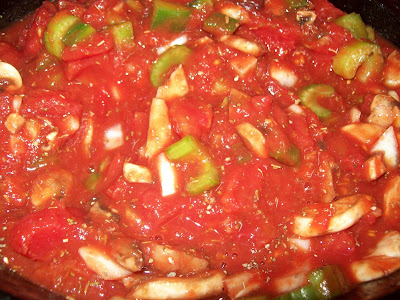 When the sauce was partially cooked, I used a potato masher to break up the tomatoes and turn it to a smoother sauce, I used the masher again right toward the end, to really incorporate all the ingredients into a nice sauce.
I wanted the sauce to be hearty, so I added 2 1/2 pounds of cooked and drained ground beef. Stir meat into sauce about half an hour before it is done so it has some time to incorporate with the sauce.

The sauce turned out wonderfully- I served it over spaghetti and everyone loved it. 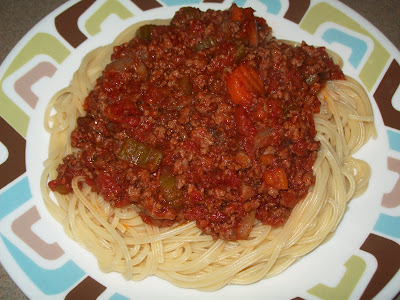 This was such a nice big recipe of sauce that we had enough left over to add to a box of cooked and drained penne noodles, mixed with a cup of shredded cheddar and a cup of mozzarella, put it all in a casserole dish and baked at 375 F. for about 40 minutes and had a delicious pasta casserole for dinner on Sunday night. 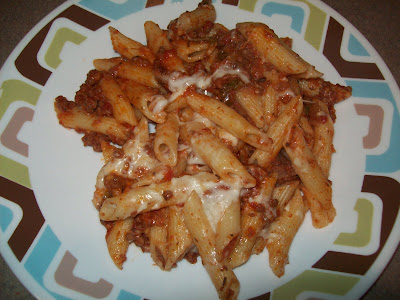 I think this recipe would also be good mixed with rice and used to stuff green peppers or zucchini, I might try that next time- after I invest in some good kitchen gloves :)

This weekend we also celebrated my son's 15th birthday. He invited a few of his friends over for a fun day of gaming, lots of snacking, and a BBQ. They all had a great time hanging out. My son and his friends have known each other since they were very young, and have been having fun hanging out for nearly their entire lives- it is so wonderful to see them all growing up into amazing young men.

Joseph's cake was modeled after a cake from one of his favorite games - Minecraft, his cupcakes were topped with pop rocks, which is a pretty fun candy to use in place of standard sprinkles, just don't put them on too far in advance as they will start to dissolve after a few hours. 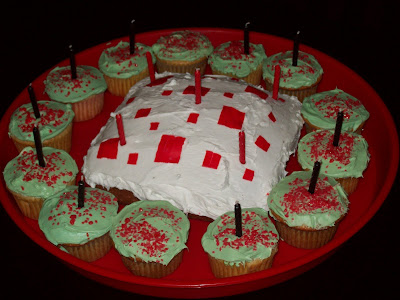 For our party favor- One of my son's favorite candy - Swedish Fish, a mini Whoopie Cushion, and a few multi-sided dice (all the boys like gaming, and making up games with these dice). 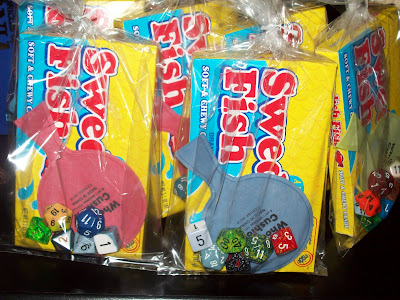 I buy the dice by the pound at Amazon- this is a fun set to have for kids, they can use them for various games, as well as math games, very good deal for all sorts of fun colorful multi-sided dice.

All the boys had a fun time, and Joseph had a great birthday. Happy Birthday Joseph!! 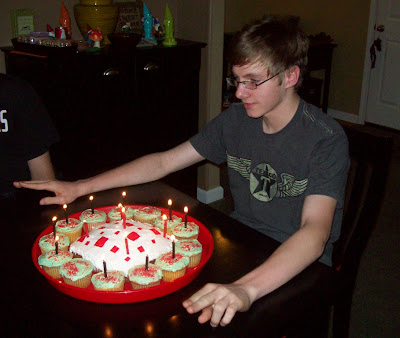 Looking forward to a nice fall week, getting ready for the homecoming game and dance coming up this next weekend, as well as lots more fall cooking and gardening!

Posted by April's Homemaking at 7:13 AM