Our Day at The Hello Kitty Supercute Friendship Festival

Earlier this summer I heard that a Hello Kitty Festival was coming to Portland. I am a huge Hello Kitty fan, as well as a fan of all of the different Sanrio characters, so I knew I would love an event like this. My hubby and daughter attended with me, and we had a great day. I took lots of pictures and I thought I would share with you about this fun event.

We arrived early and while we waited in line we were able to press some pennies in a special Hello Kitty penny press, which was fun. We were near the front of the line so we were among some of the first to enter, which was nice since I was able to get a good look at the layout before the event got crowded. The festival area was decorated so cute with so many great things to see. 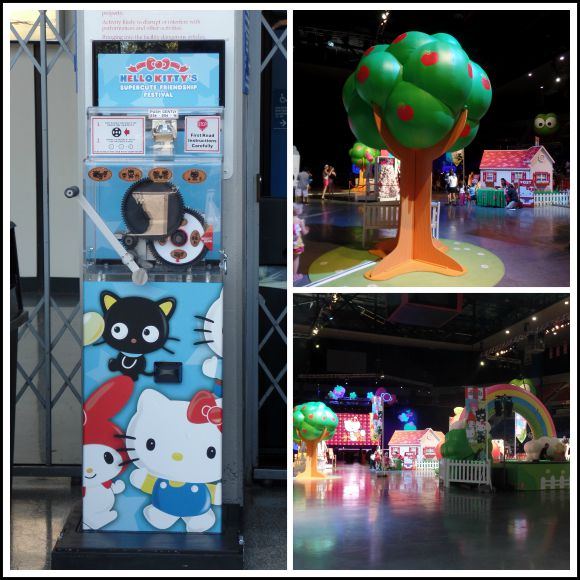 There were multiple little areas decorated for each of the main Hello Kitty characters. They were set up so you could take pictures, which I thought was really fun. Here we are in Pom Pom Purin's living room, as well as Badtz Maru's Motorcycle Shop. We enjoyed walking around all the different stations and getting pictures. 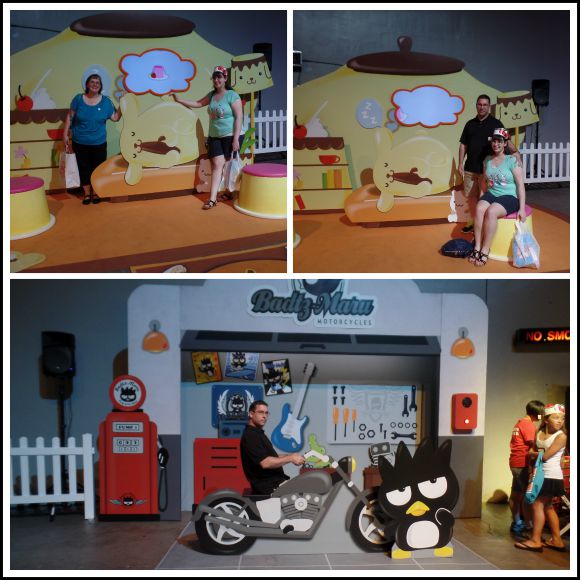 When I was reading other reviews and articles about the event before we went, I saw pictures of this wonderful Hello Kitty themed Spam Musubi kit and I was hoping it would be at the festival. Spam Musubi is Spam on top of rice wrapped with Nori, I've had it before at a Hawaiian restaurant in one of our local malls and I really enjoy it, so I was super excited when I saw the booth and was able to buy the kits. 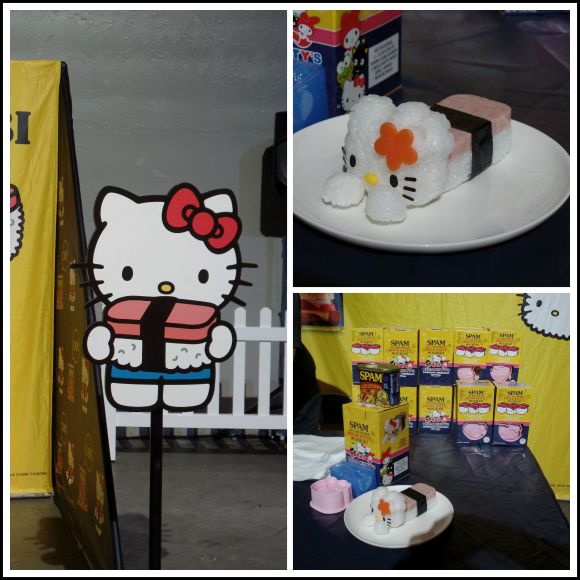 Here we are checking out Keroppi Frogs pond, as well as some of the display cases of Sanrio items like plush dolls and cute accessories. 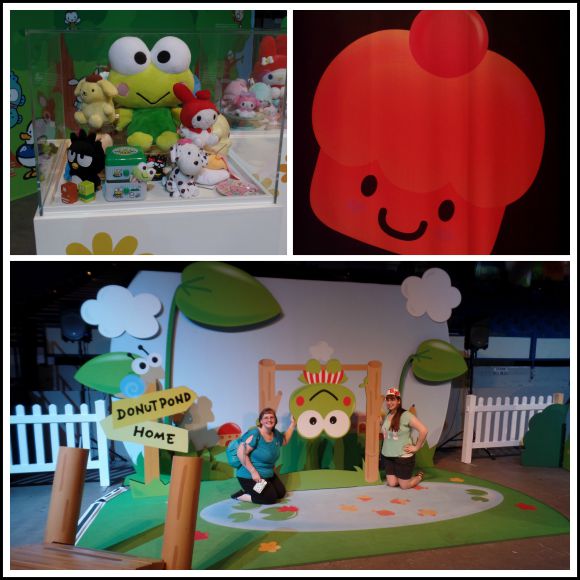 There was a temporary tattoo station and we all got a tattoo, Sarah got My Melody, Gary got Badtz Maru, and I got my favorite Sanrio characters- The Little Twin Stars. They were really nice quality and colors for temporary tattoos and lasted for three or four days. They had a bunch of cute designs to choose from. :) 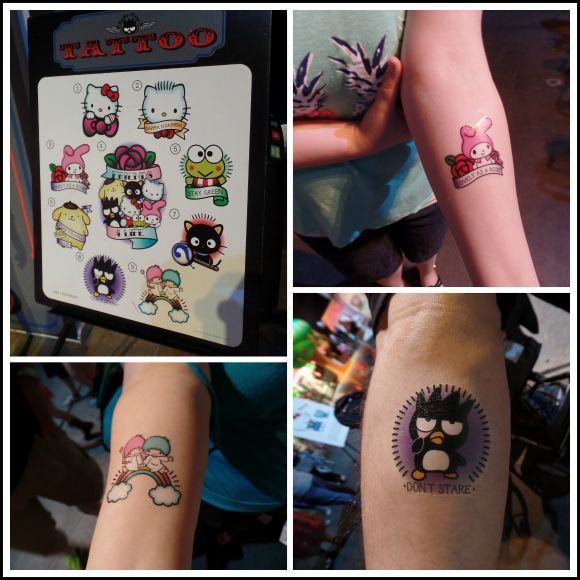 They had a couple stage areas for live shows, a smaller one, and then a large one with a big screen, lives shows happened like every twenty minutes to half an hour or so. You could walk around and attend whichever show s you wanted as well as do all the different activities. One of the stations was a little movie theater behind this giant box of popcorn, I was excited because I had heard there might be a video of some of Sanrio's newer characters. 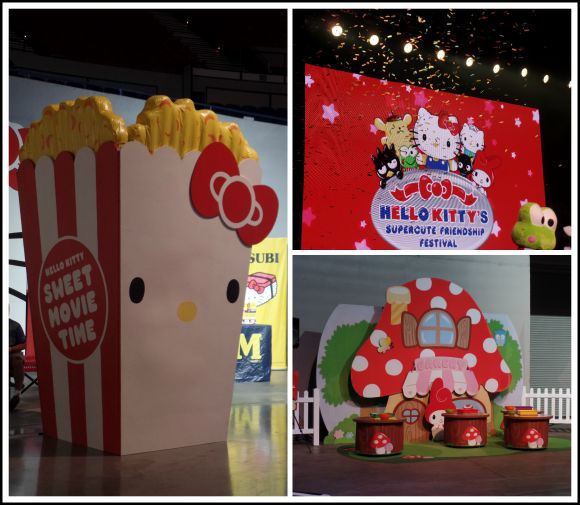 We sat and watched three little movies. One of the movies was of a newer Sanrio character called Gudetama, he appears to be a little egg, and he is so cute!! 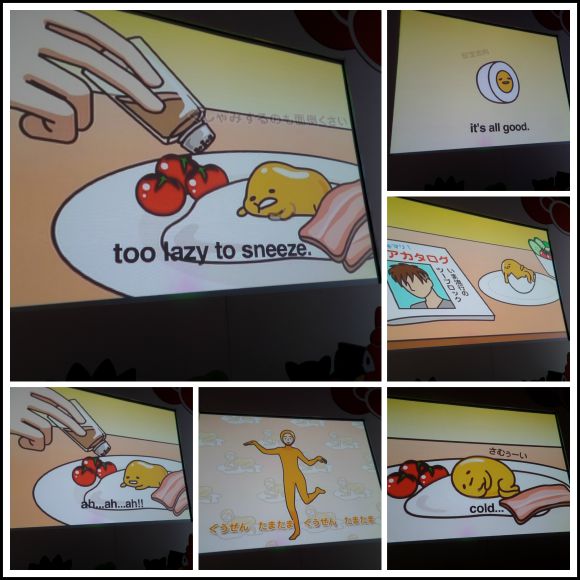 The other new character is called Kirimichan and is a piece of Salmon. Sanrio has a way of even making something odd, like a piece of Salmon, cute. The video was really fun to watch, there was also a slide show of Hello Kitty pictures through the years and a cute dance video of the character Pom Pom Purin who is a cute chubby golden retriever who wears a beret. 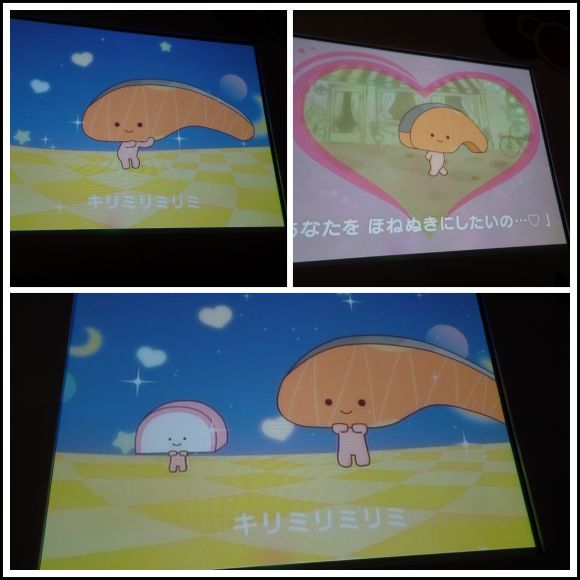 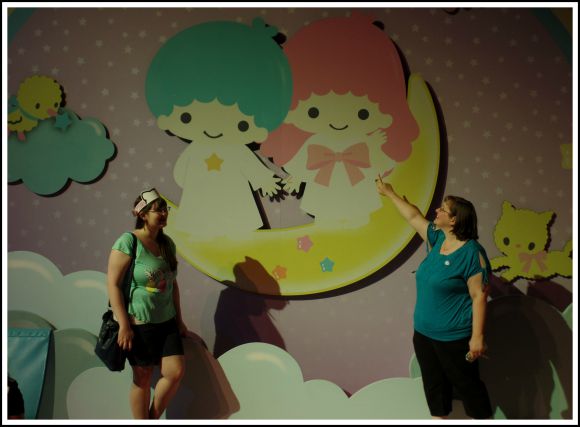 The stage shows were really fun. I wasn't sure how interested I would be in seeing them, I assumed they were going to be geared for younger kids. Although they were cute and geared for kids, they were equally entertaining for the adults. The music and dance was really well done, I still have some of the songs stuck in my head! The lighting and effects were also really fun, and overall I ended up really enjoying them. 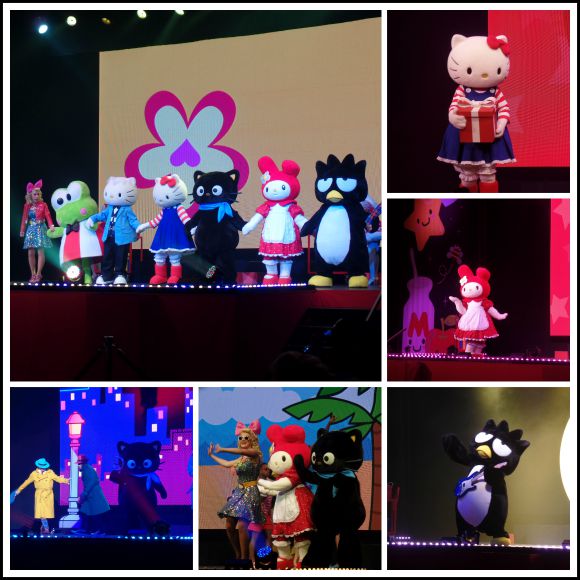 In addition to really great singing and dancing there were really nice graphics on the big screen which were fun to see, and very bright and colorful. Everyone, young and old, seemed to really be enjoying the show. 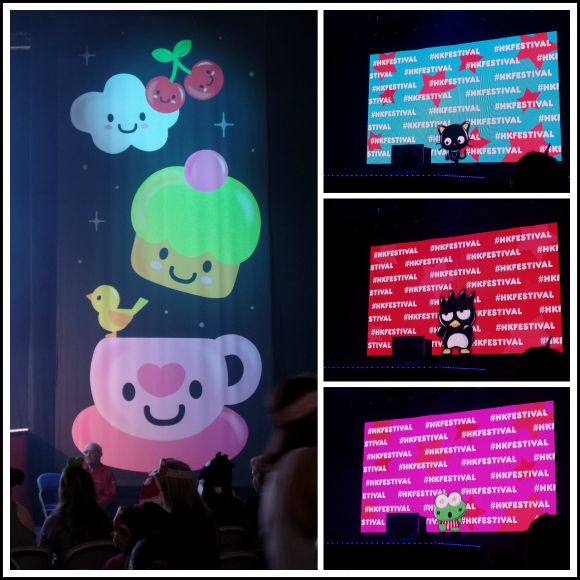 There was a wide variety of music in different themes all of which were very fun and cute, and even a drum and rock and roll type violin performance which was really really well done. The whole show had a running theme of friendship and caring and it was a sweet message to share and a nice way to teach kids. :) 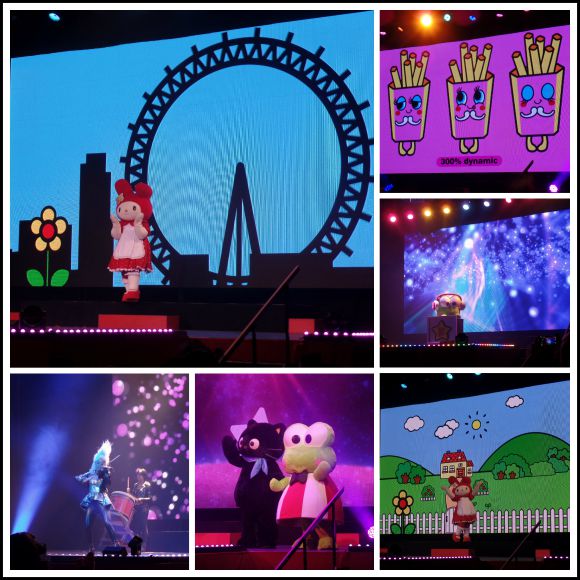 There were many interesting things on display, one of the thing to see was different Hello Kitty and Friends themed dresses, they were pretty funky, but fun to look at. 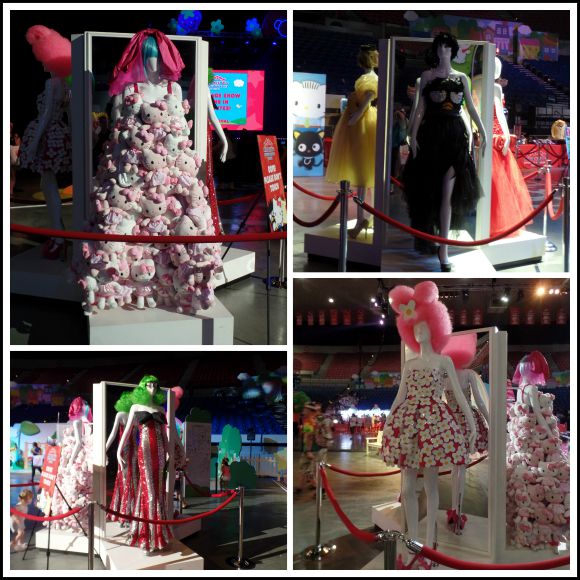 There was a miniature Hello Kitty House, on one side of it there was a station to write a postcard to Hello Kitty, along with a mailbox to mail your letter, as a reward you would get a cute button. :) There was also a paper folding station where you could make an origami bow or a fortune teller cootie catcher type folded paper. 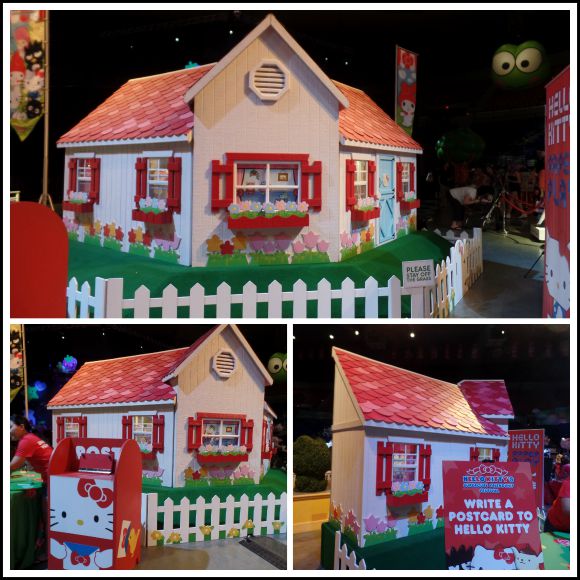 Around the back of the house you could see inside and all the rooms where filled with Hello Kitty themed items. I really want to find that Hello Kitty stuffed Taco!! 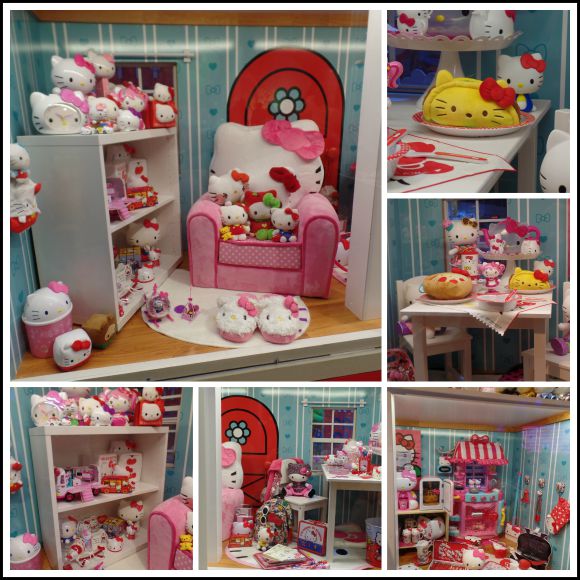 There were so many things to see and take pictures with. My daughter pointed out that even the staff had funny and cute shirts on that said Supercute Staff, we got a kick out of that! :) 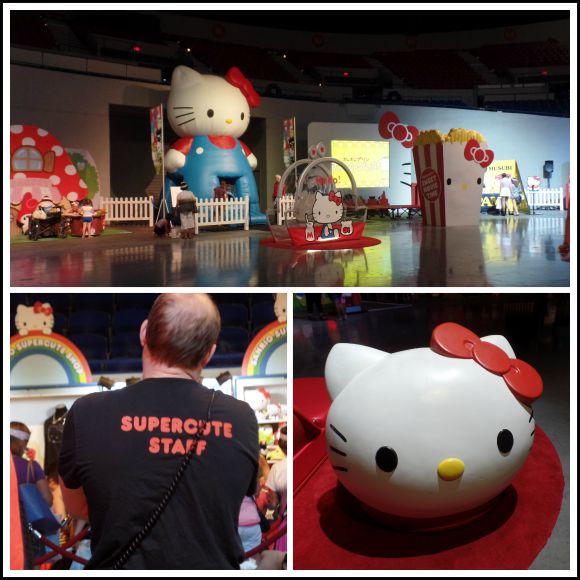 There were multiple displays set up with different Hello Kitty and Friends items, it was set up almost like a museum it was fun to see everything. 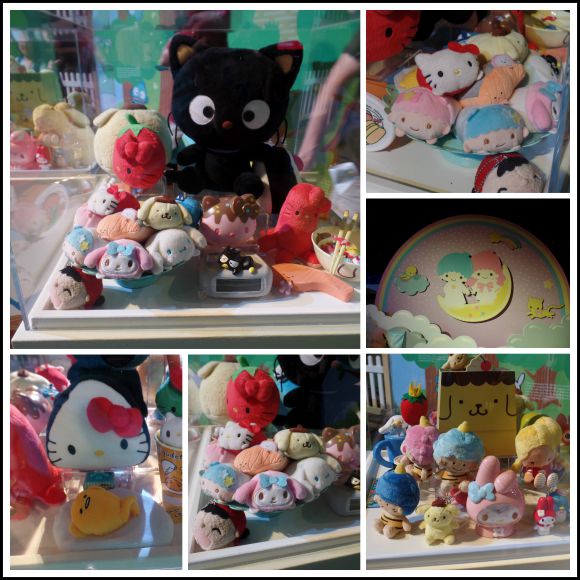 Here are more of the cute Hello Kitty dolls and accessories that were on display. I definitely saw a few things I would like to add to my collection. :) 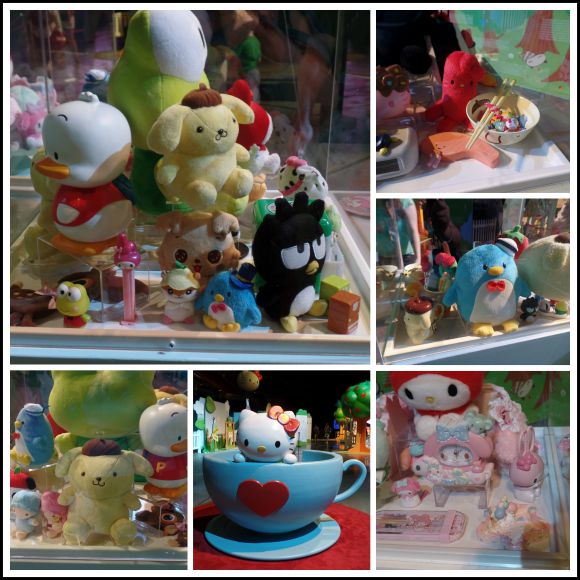 After looking around a bit more there was a final show, that ended up with a cute song and dance with Hello Kitty in a light up dress with her boyfriend Dear Daniel. Then the show ended with a nice light display and streamers and confetti. It was a very very fun show! 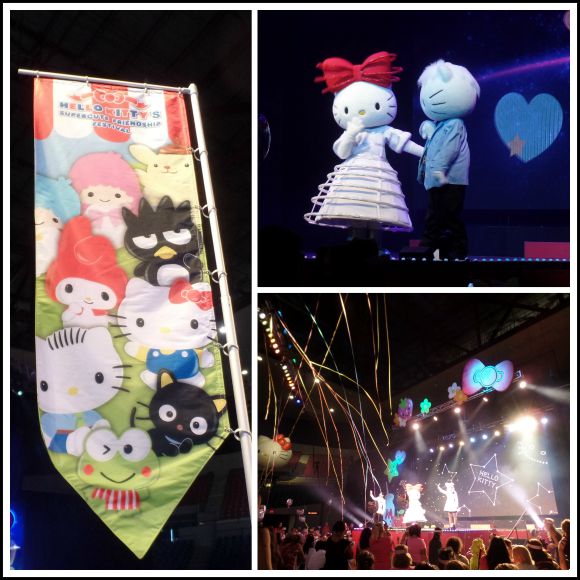 We took a few more pictures, including one with me and Sarah inside of a giant Hello Kitty Purse! :) 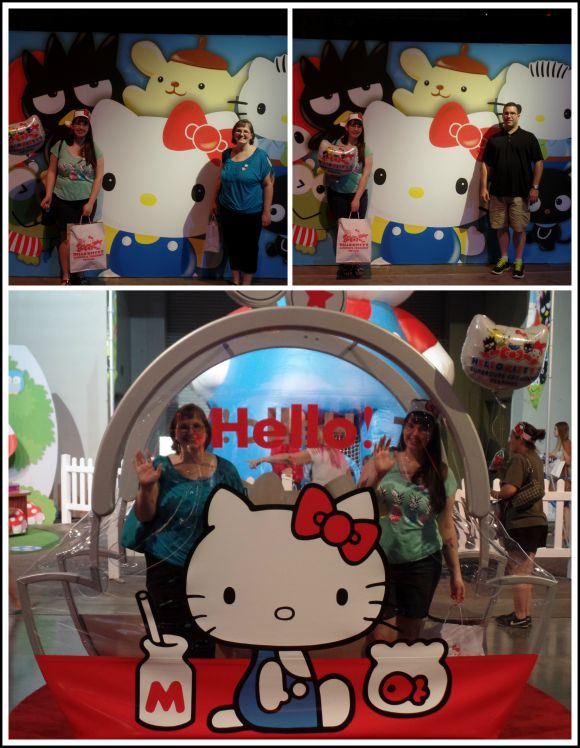 We left with a nice collection of souvenirs. Overall it was a great day, and definitely Supercute!! If you are a fan of Hello Kitty or have a child or grandchild who is, I would highly recommend going if it comes to a town near you.

I have also recently decided to try out vlogging, and have stared a YouTube channel. I am still in the process of learning how to edit and make videos. I made a video about all of the goodies we brought home from this event as well as a short video with clips of some of the Festival. Here are the links to my two videos. 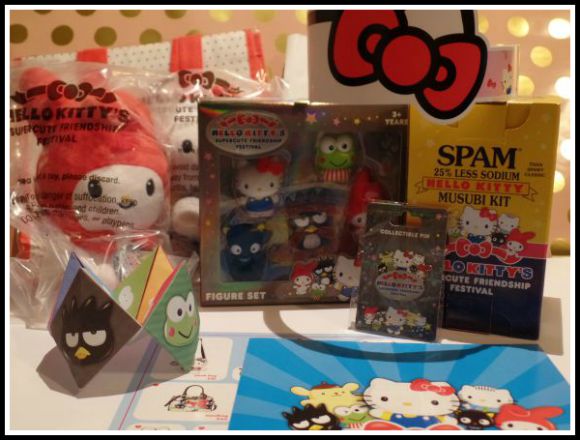 Thanks for stopping by!!