This week at the grocery store I found a wonderful deal on pork shoulder, so I bought a couple, one for the freezer and one to cook this week.  I decided to make pulled pork sandwiches, and try my hand and making BBQ sauce from scratch for the first time. Everything turned out great, so I thought I'd share the recipe. 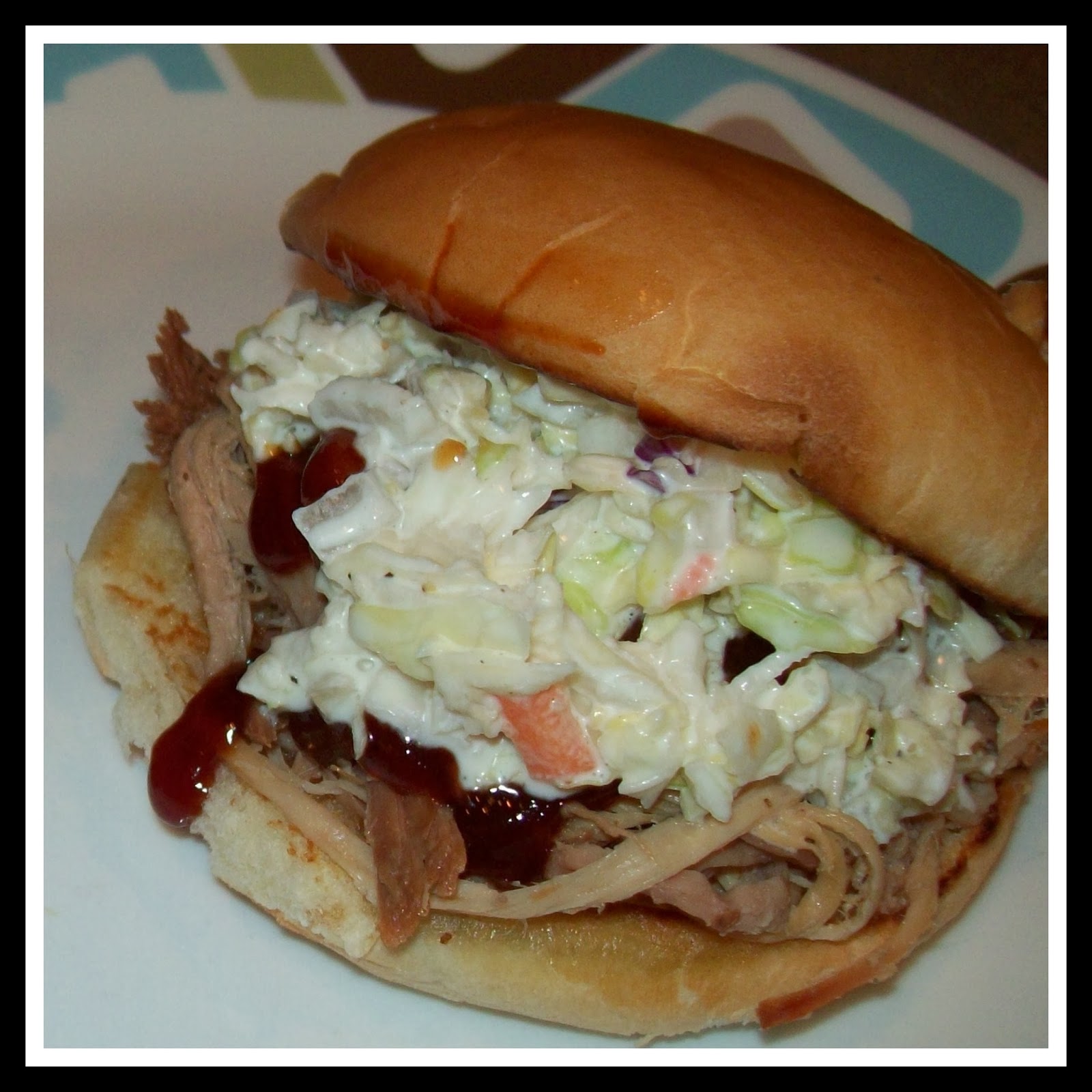 I got started on the pork nice and early in the morning, and had it in the crock pot by 8:00 am. I put the pork in the crock pot with about a cup of water and a can of cherry cola, I also gave it a little sprinkle of garlic powder, not much just a few pinches. I let the pork cook all day, I kept it on high for the first six hours then turned it down to low until dinner time.

During the day I made the coleslaw, I love BBQ dishes with coleslaw. It's better to make the coleslaw in advance so it has time to chill and let the flavors bloom. I shared my apple slaw this past fall, which would also be good with this meal, but I decided to make classic coleslaw. 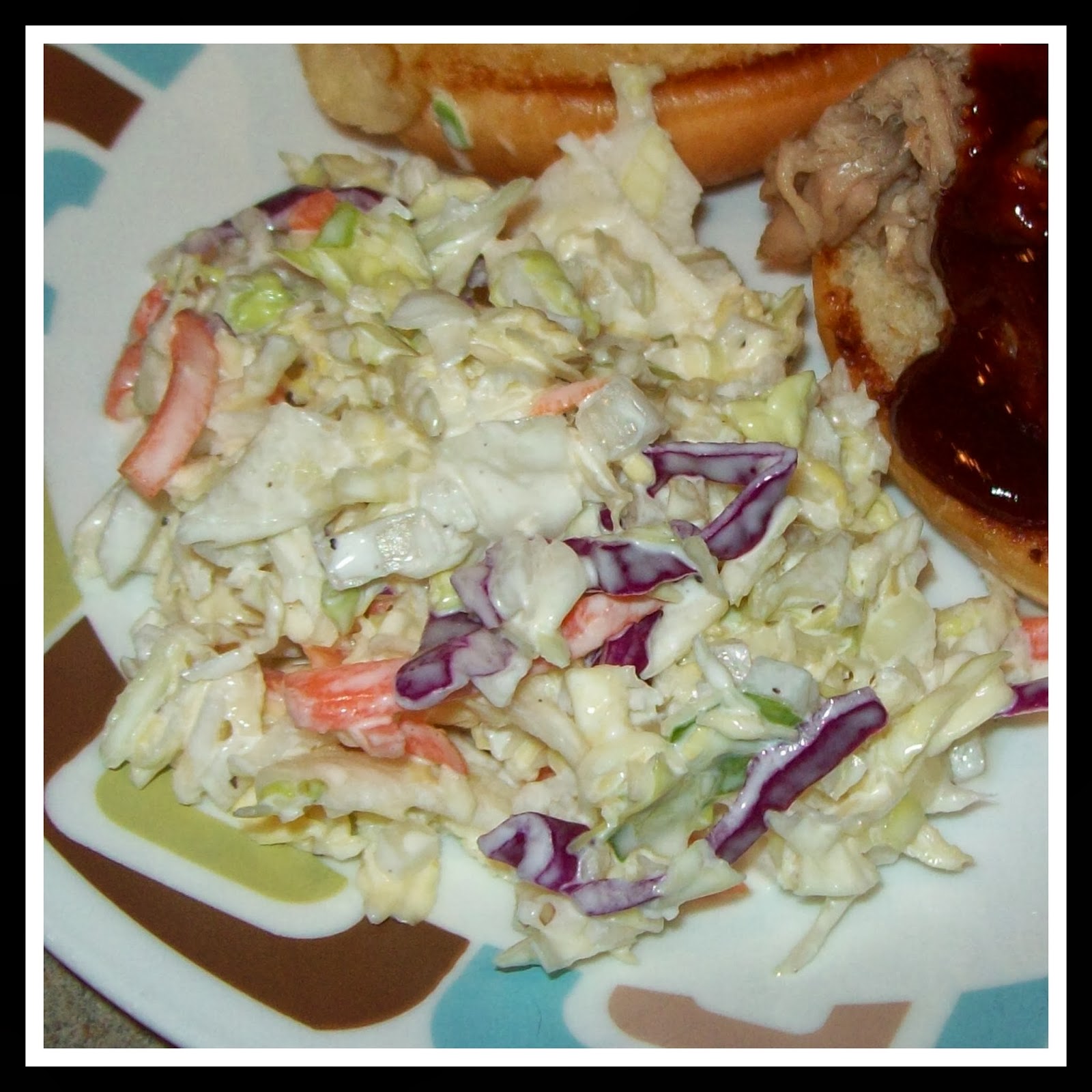 First I combine the coleslaw mix and onion in a bowl and set it aside. In a smaller bowl I combine the rest of the ingredients except the pepper and whisk them together until combined. Usually it needs a little tweaking, perhaps a bit more sugar or vinegar, if it is too thick another splash of milk. The sauce should be sweet with a kick of vinegar, when the sauce is too your liking, pour it over the coleslaw and stir until combined, then add freshly ground black pepper to your taste, I like a medium amount, some people like more or less, my children like their coleslaw more mild, so I tend to go easier on the pepper. Stir until combined, then cover and chill.

About an hour and a half before dinner I started the BBQ sauce. This was my first attempt at making my own from scratch and it turned out yummy, so I will definitely be making it again and experimenting with different flavors. Here's how I made my BBQ Sauce. 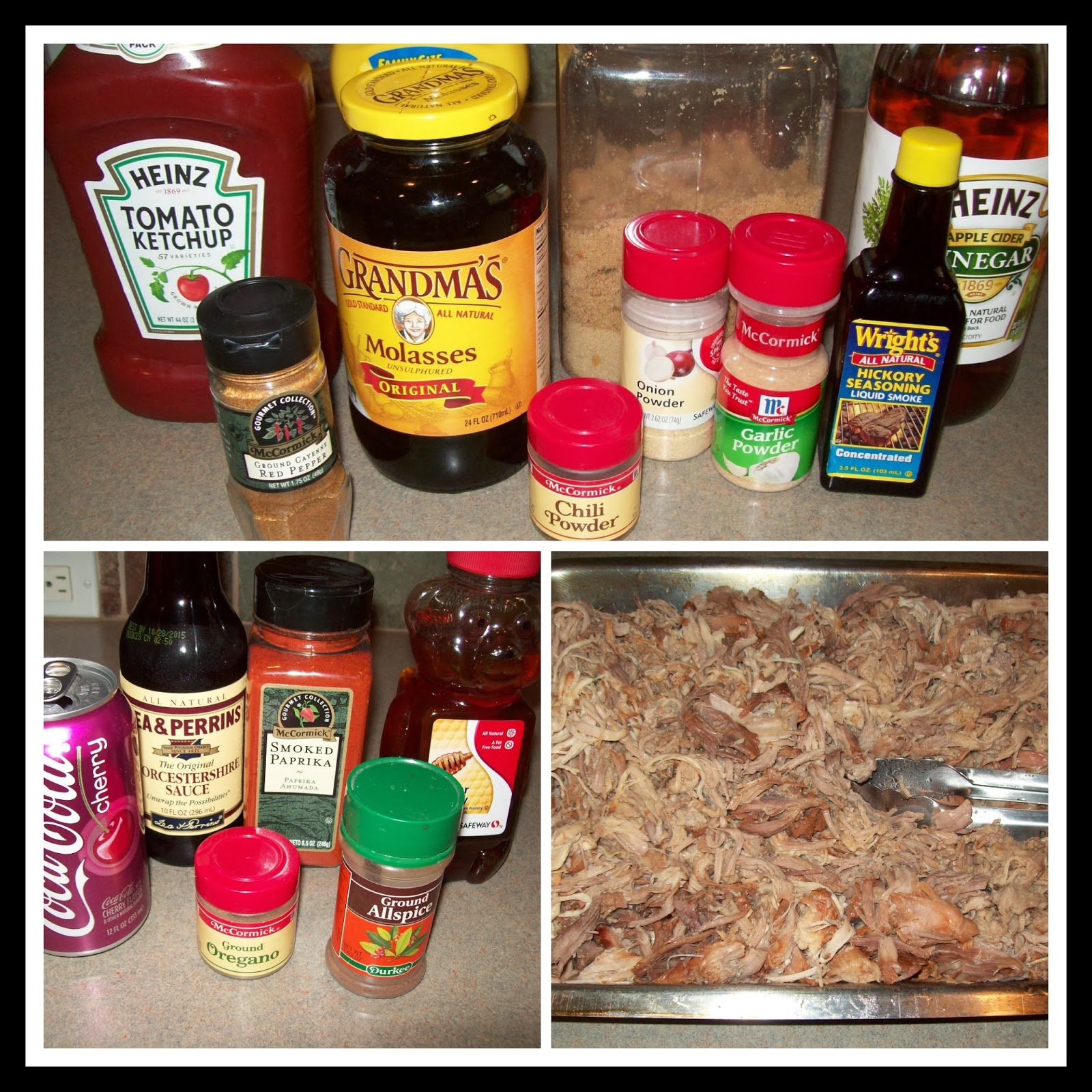 I combined all ingredients except the cherry cola in a sauce pan and mixed together over medium heat, when the sauce came to a very low boil I turned it down to simmer. After all the spices were combined I added the cherry cola and stirred that in until combined. I had quite a few tasting spoons nearby and added a bit more of what I thought it needed until it was just right. This was a mild sauce, nice and sweet with a little bite, my family likes things mild, but you could kick this up a notch with a couple dashes of hot sauce if desired. I definitely added a bit more garlic and onion powder and a little more mustard and molasses, it is important to taste as you go and adjust flavors as needed. If it gets too thick you could add a splash more cherry cola. Cook over low heat for around an hour, stirring frequently. I kept the sauce warm to serve it over the pork, but it could be cooled and saved for later.

When the pork was done I removed it from the crock pot with tongs and a large slotted spoon, into a roasting pan. I removed the bone and fat, then using two forks shredded the pork. I covered it with foil and prepared the buns- I gave the buns a light coating of softened butter and browned them on a flat griddle pan until they were a nice golden brown. Then it was time for dinner.

I served it assembly line, buffet style. Grab a bun, top it with shredded pork, top with sauce, then either top it with coleslaw, which is the way I love it, or serve the slaw on the side. Since BBQ pork and coleslaw is a filling meal all by itself, I served it with a simple side of grapes, fruit salad would also be good. 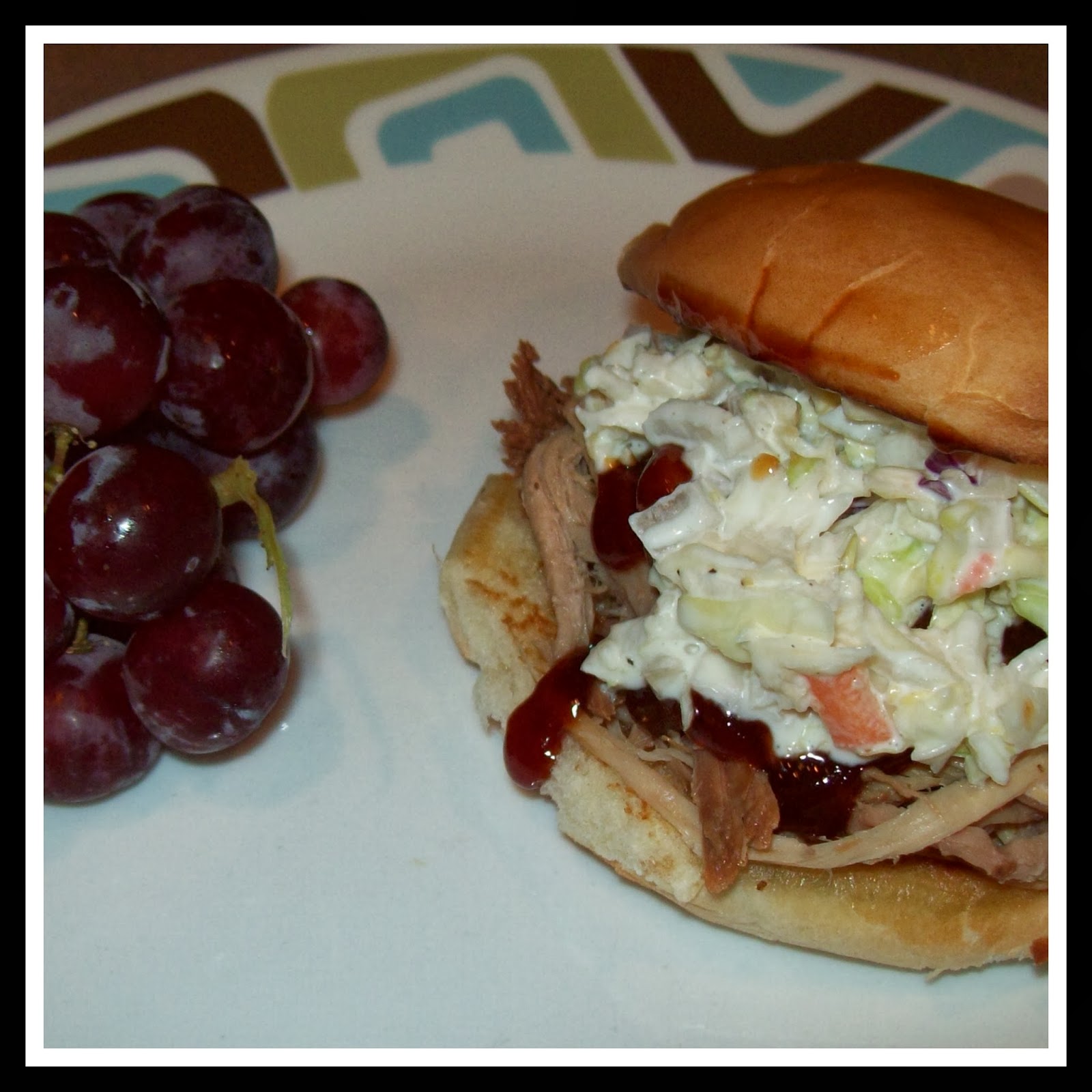 Slaw on the top, or slaw on the side, both delicious options! 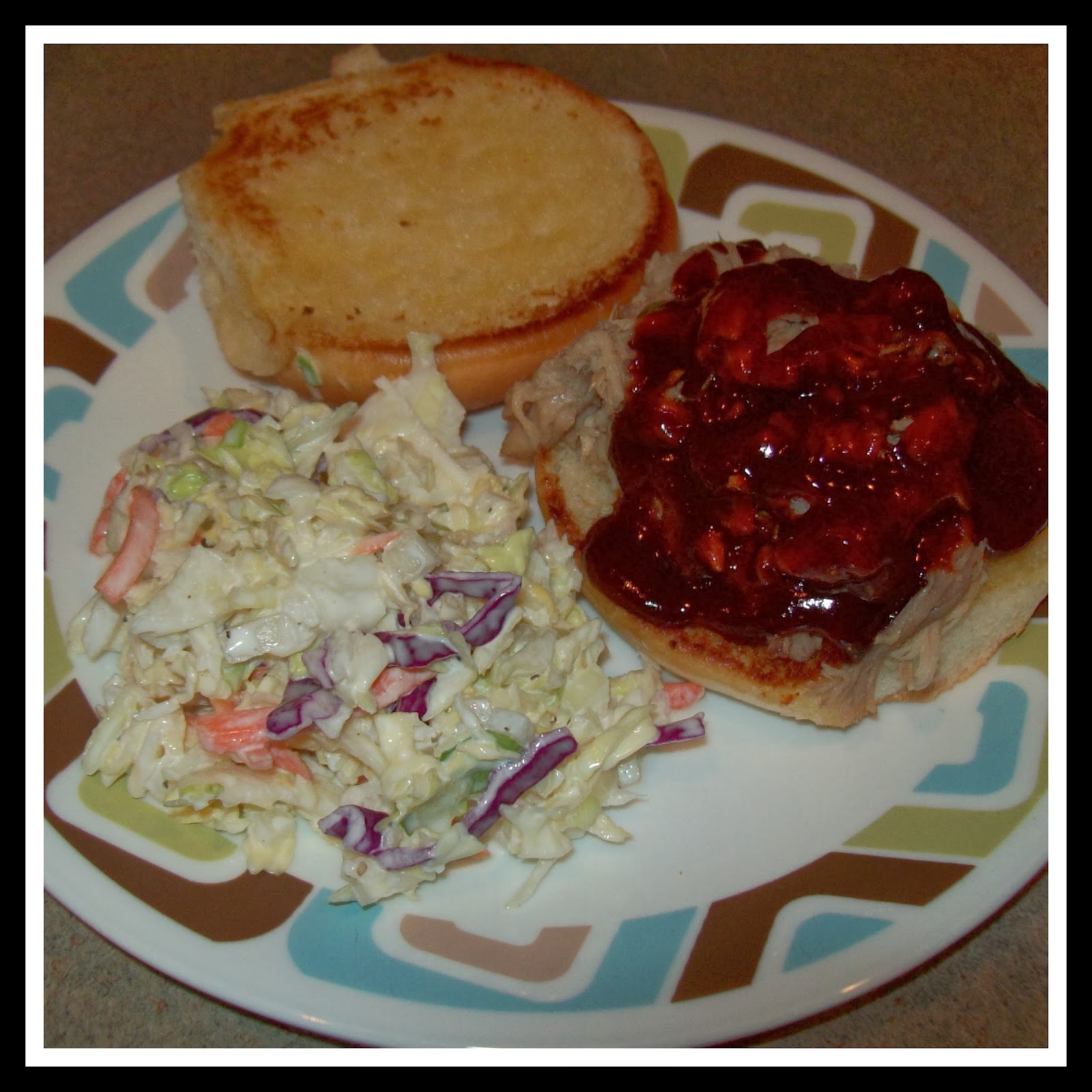 I had plenty of left over pulled pork, it made delicious left-overs mixed with BBQ sauce thinned out a bit with some added soy sauce and more cola, along with plenty of sauteed onions, served over steamed jasmine rice. Sauteed bell peppers would be nice with this meal as well, and as I was eating the left overs I thought roasted pineapple chunks would be a really nice flavor addition as well. All around a great bargain cut of meat, it fed two adults and four teenagers two full dinners, as well as multiple lunches. We will definitely be having this meal again throughout the spring and summer.

Posted by April's Homemaking at 4:47 PM