Last Sunday I hosted my sister's bridal shower, we all had a wonderful time. The bridal shower theme was Vintage Floral, and we had a old fashioned luncheon with plenty of tea sandwiches and desserts. I made two new recipes for the shower that I wanted to share, Lemon Puffs, and Cheddar Apple Tea Sandwiches.

These are the Lemon Puffs, and the instructions to make them are extremely simple. 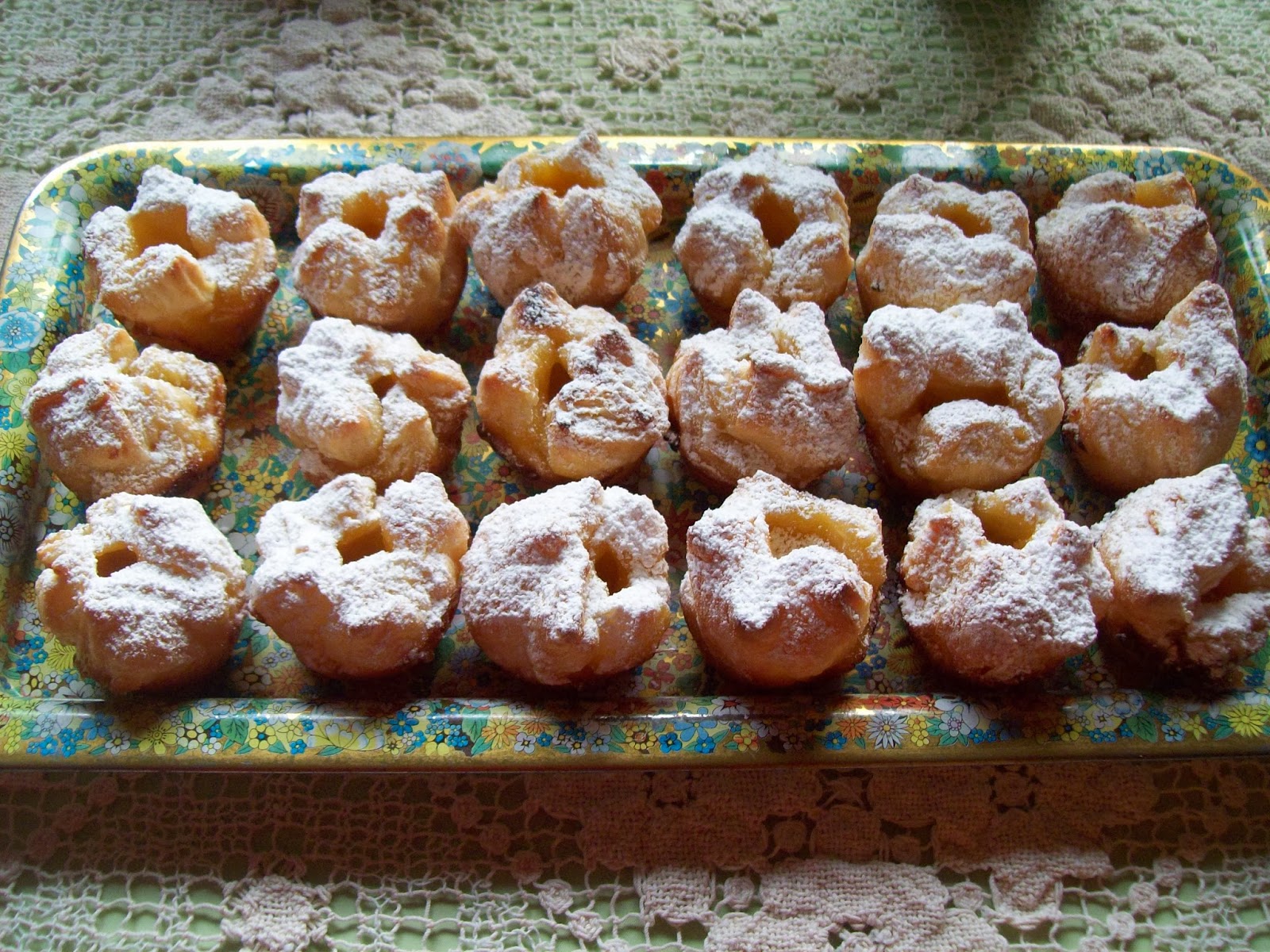 I was originally going to make Lemon Tassies that I have made in the past for tea parties, but as the evening before the shower was dwindling, full of other party preparations, I realized I would have no time to make them, and needed something easier. I had some puff pastry in the freezer, and I knew I still wanted to use the lemon curd I purchased, so I Googled recipes for puff pastry and lemon curd.  I found some good ideas and altered them a bit to come up with these little lemon puffs.  Here are my instructions.

Thaw puff pastry on the counter according to package directions, spray a mini muffin pan with pan spray, preheat oven to 425 F.  Using a pizza cutting wheel cut each puff pastry sheet into 12 squares (for a total of 24), bending the sides of each puff pastry square fit them into the mini muffin cups, then spoon about 1/2 a teaspoon of lemon curd into each square, then bring all four corners to the center and pinch together to seal. Bake for about 10-14 minutes until puffed and golden, keep your eye on them in the last couple of minutes, I left mine in for a minute too long and the lemon curd started to bubble out and a few were ruined due to the burned sugar from the lemon curd getting too hot and bubbling out, luckily I caught them in time so I didn't ruin the whole batch! When they are done, remove them to a cooling rack, I used tongs to pop them out as they were too hot to handle, when the puffs are cool dust them with powdered sugar.  They were delicious, and so easy to make, definitely something I will be making again!

The next new recipe I made was an Apple Cheddar Tea Sandwich. I knew I wanted a new tea sandwich for the party, and I wanted it to have a slightly sweet element, I thought thinly sliced apples would be delicious in a sandwich.  These were very easy to make and a yummy addition to the tea sandwich tray.

Here are the instructions to make this easy tea sandwich. 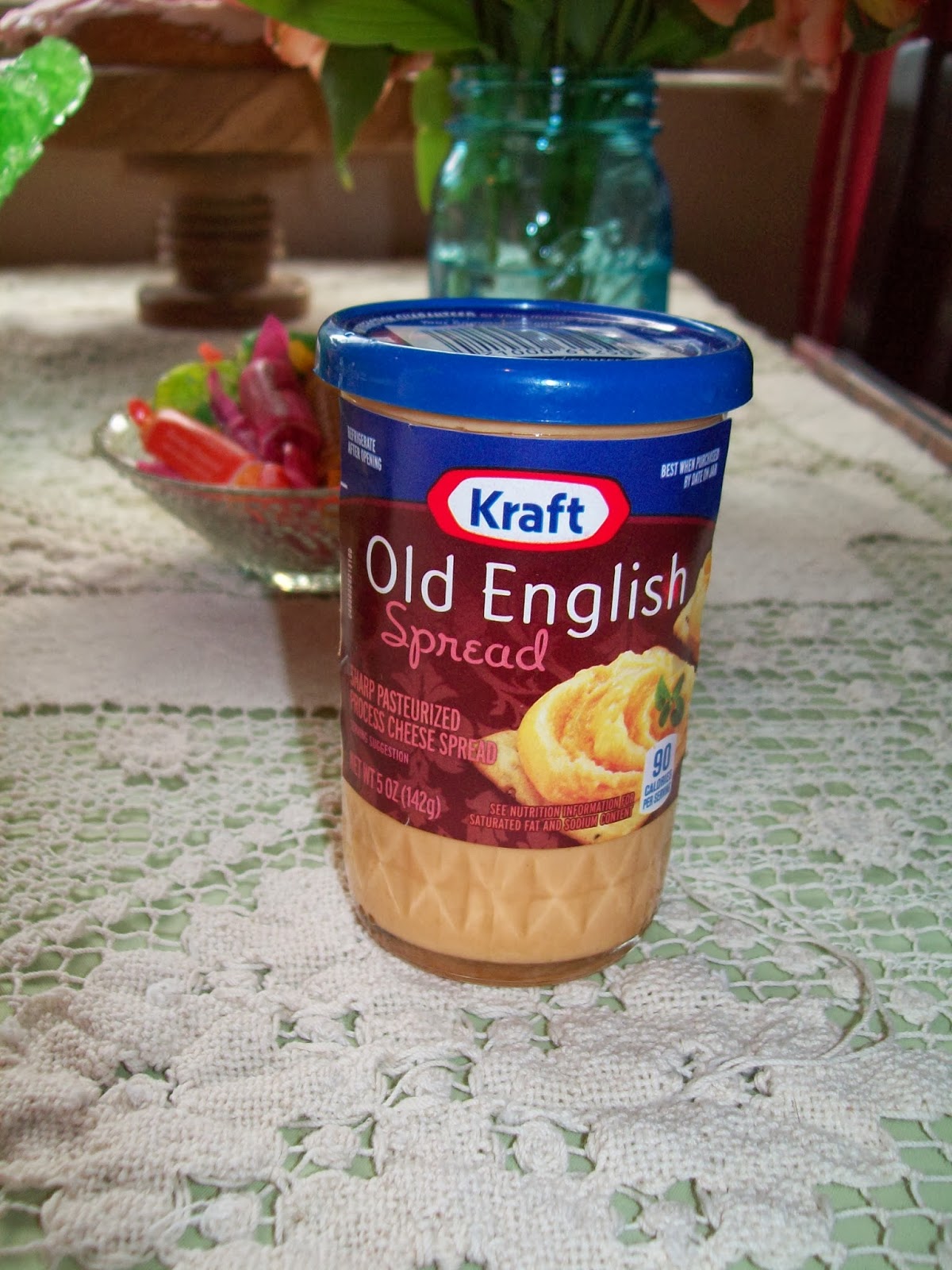 To make the sandwiches, first core, peel, and thinly slice your apples.  The picture below shows the sandwich at various stages. First butter or margarine both slices of bread, this acts as a moisture barrier so the sandwich doesn't become soggy, then on one slice, spread a thin layer of the Kraft Old English cheese spread, then add a layer of apple slices, and put the top slice of bread on.  Using a sharp bread knife, cut off the crusts, then cut the sandwich into three long rectangles, then cut those each in half, you will end up with 6 little sandwiches from one regular sized sandwich, the smaller pieces were easier to eat, and stay together better. 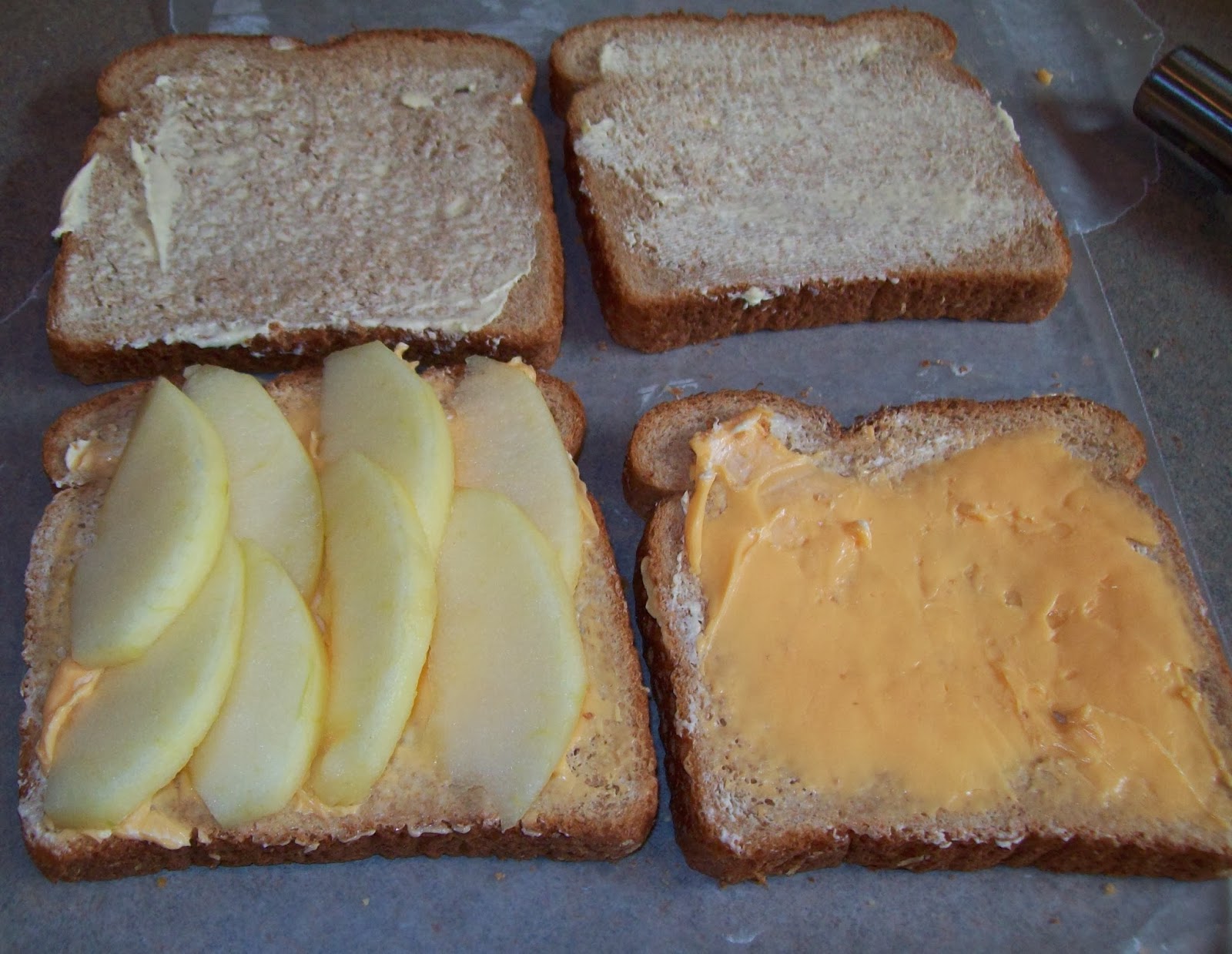 I was too busy prepping everything to get great pictures, but here they are on the tray below, the little square sandwich off to the side.  Here is a link to the recipes for my other Tea Sandwiches.  I really liked the apple and cheese combo for this new sandwich, and I would like to try other variations and possibly use a raisin or cinnamon bread with apples and cheese as well. 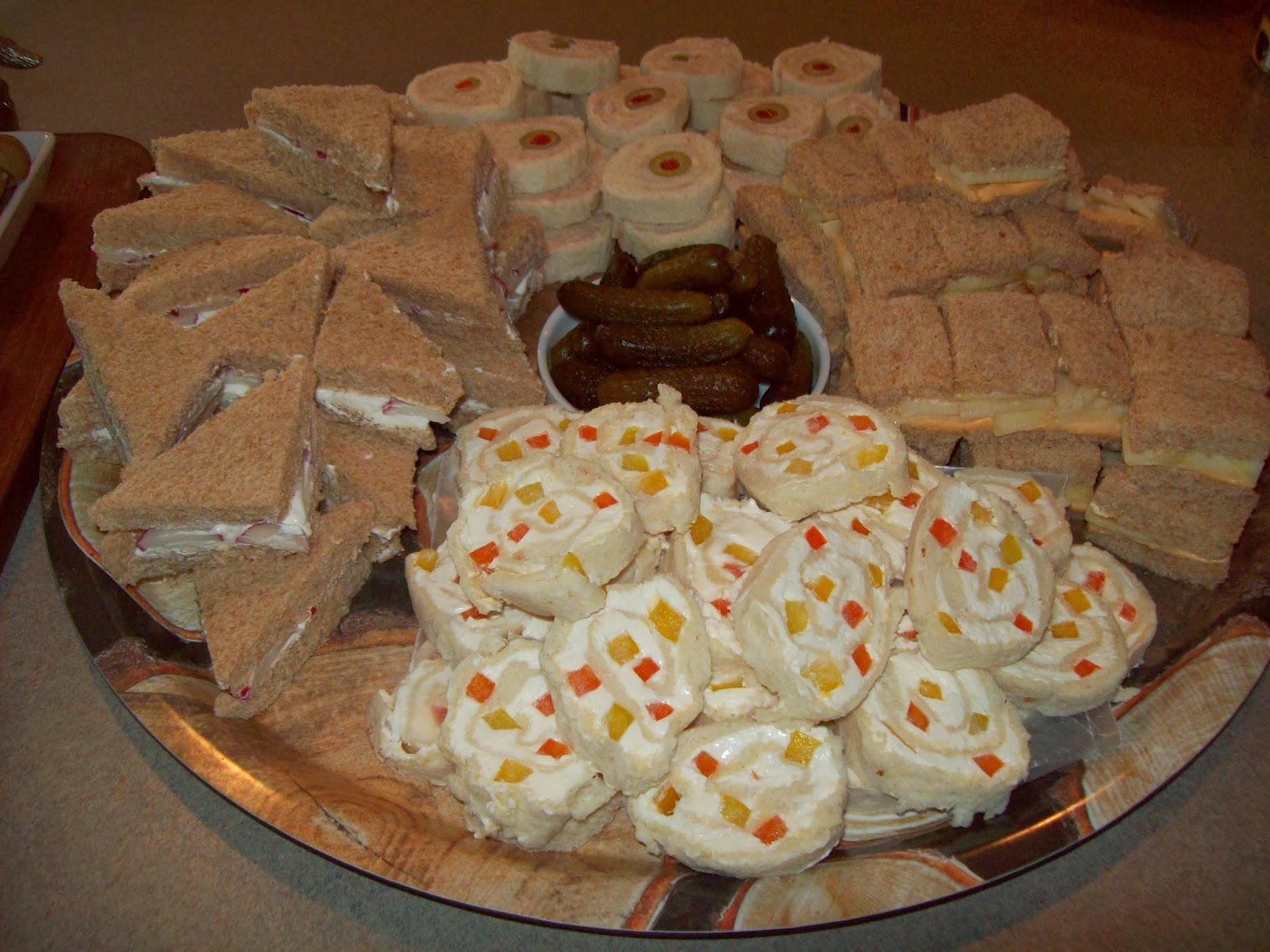 Tea sandwiches are fun, even the little kids enjoyed them, they are just the right size for party nibbling!

In other news, winter has finally arrived here, we have had such a mild winter so far, hardly a speck of snow. When the groundhog saw his shadow on Sunday I was wondering when winter would arrive, and it seems it finally may have. We had one day of big fluffy snowflakes that didn't stick to the road, and tonight we are expected to have cold enough temperatures for the snow to stick. Here in the north-western Oregon valley we usually have mild winters, so when we get a storm every few years it really shuts things down because no one is set up to drive around in snowy weather. School let out today two hours early so no one would end up trapped at the school. Now everyone is excited to have a nice cold day bundled up drinking hot cocoa, and hopefully enough snow to build a little snowman! Just so long as the power stays on for most of the time, and it doesn't get too cold and dangerous on the roads, I am happy to have a little winter. :) I really feel for all of the people in other parts of the country having such a bad winter this year, I can only take it in small doses and am mostly dreaming of the sunshiny summer and getting ready to plan my spring and summer garden!

Our dog Zoey doesn't mind the big fluffy snow flakes at all, we went out for a walk and she was trying to gobble the snow flakes out of the air and was wondering what on earth was landing all over her, it was pretty cute! :) 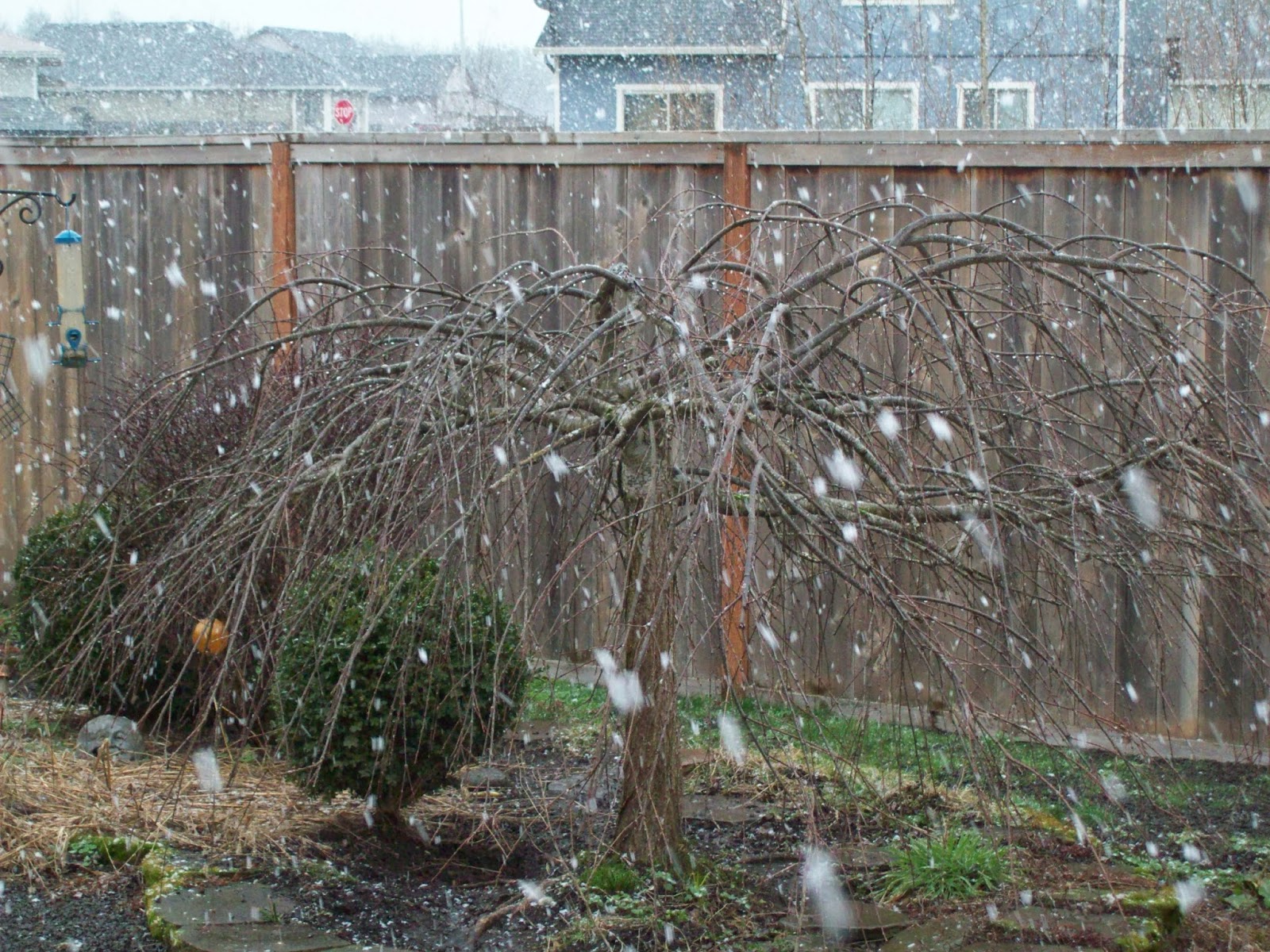 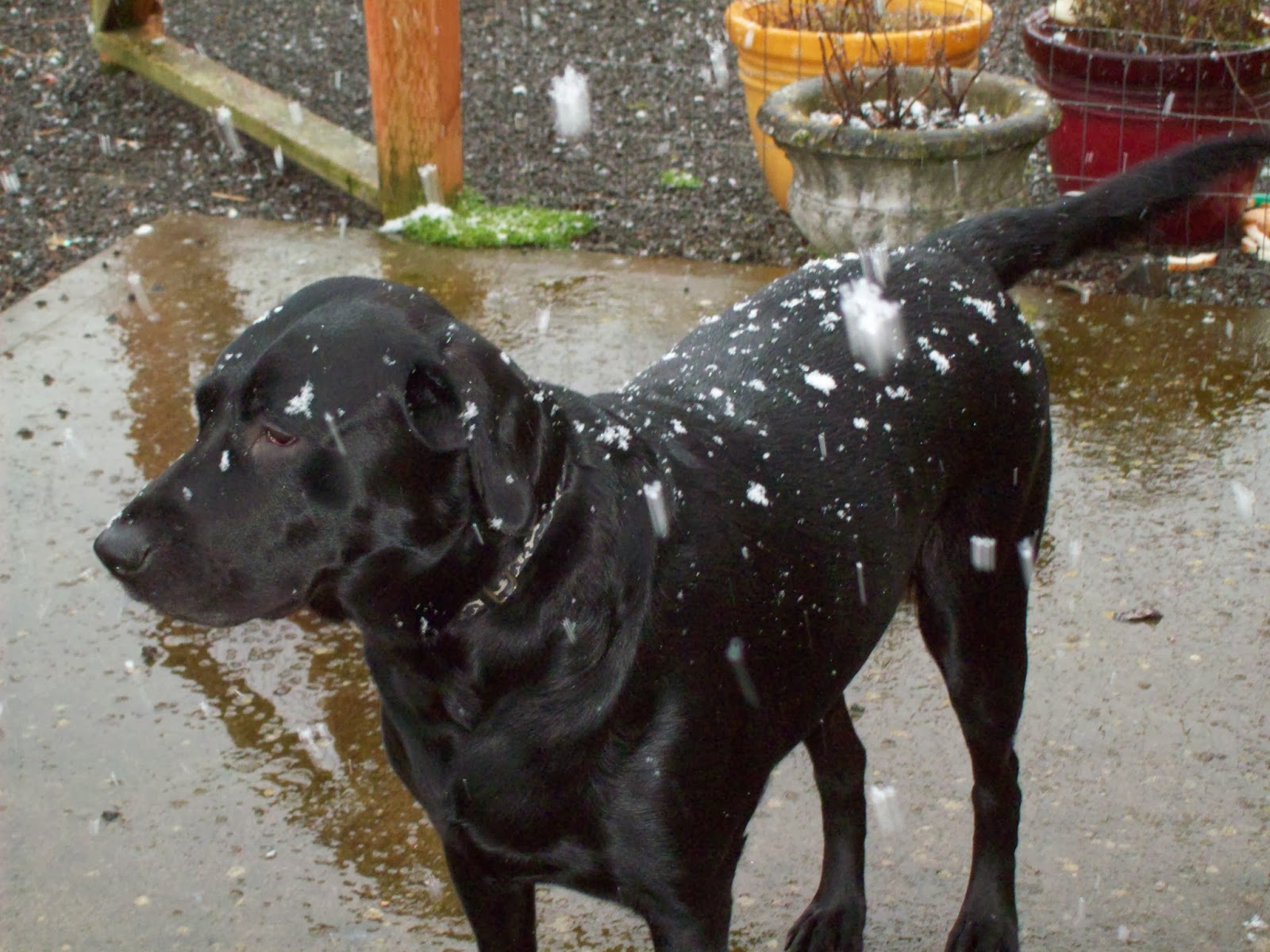 Hope everyone is having a nice week, and stays safe in all this winter weather!

Posted by April's Homemaking at 3:27 PM