Last weekend we were super excited to attend the 2014 Rose City Comic Con in Portland. This will be our third year attending and each year it gets bigger. This year instead of going for only one day, we decided we would go both Saturday and Sunday, so we would have as much time as possible to check out everything we wanted to.

We arrived nice and early on Saturday morning and the one of the first things we saw was this really cool R2D2 robot made out of Lego, it was able to move around via remote control and everyone was in awe! 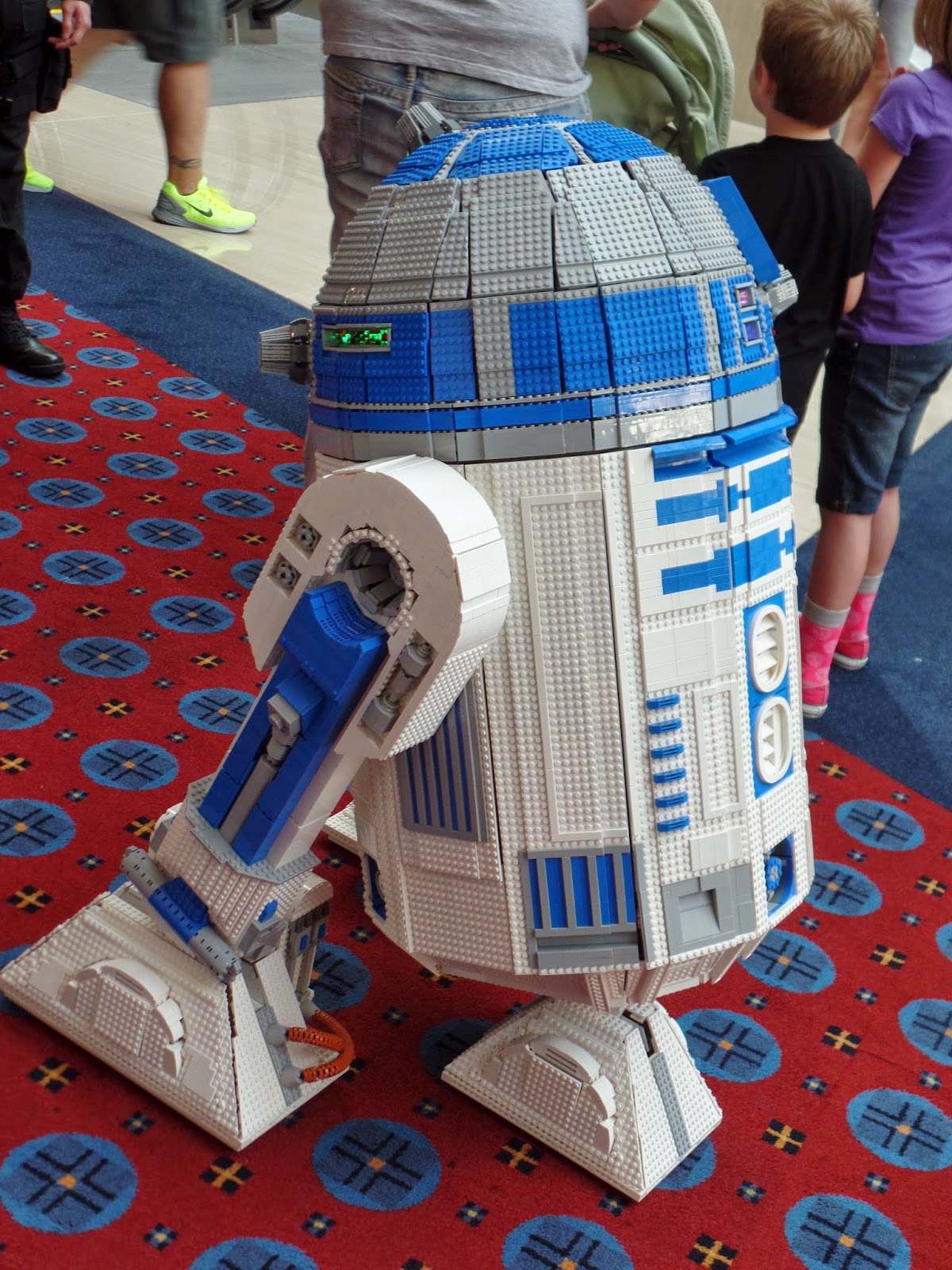 Once we got our badges we headed to a queuing room, I was amazed how many people were already there and very happy we had arrived when we did. We had to wait for the official start time for the convention floor to open. Luckily there are so many interesting people, some dressed in very elaborate costumes, so it makes standing in line quite a bit more tolerable! :) 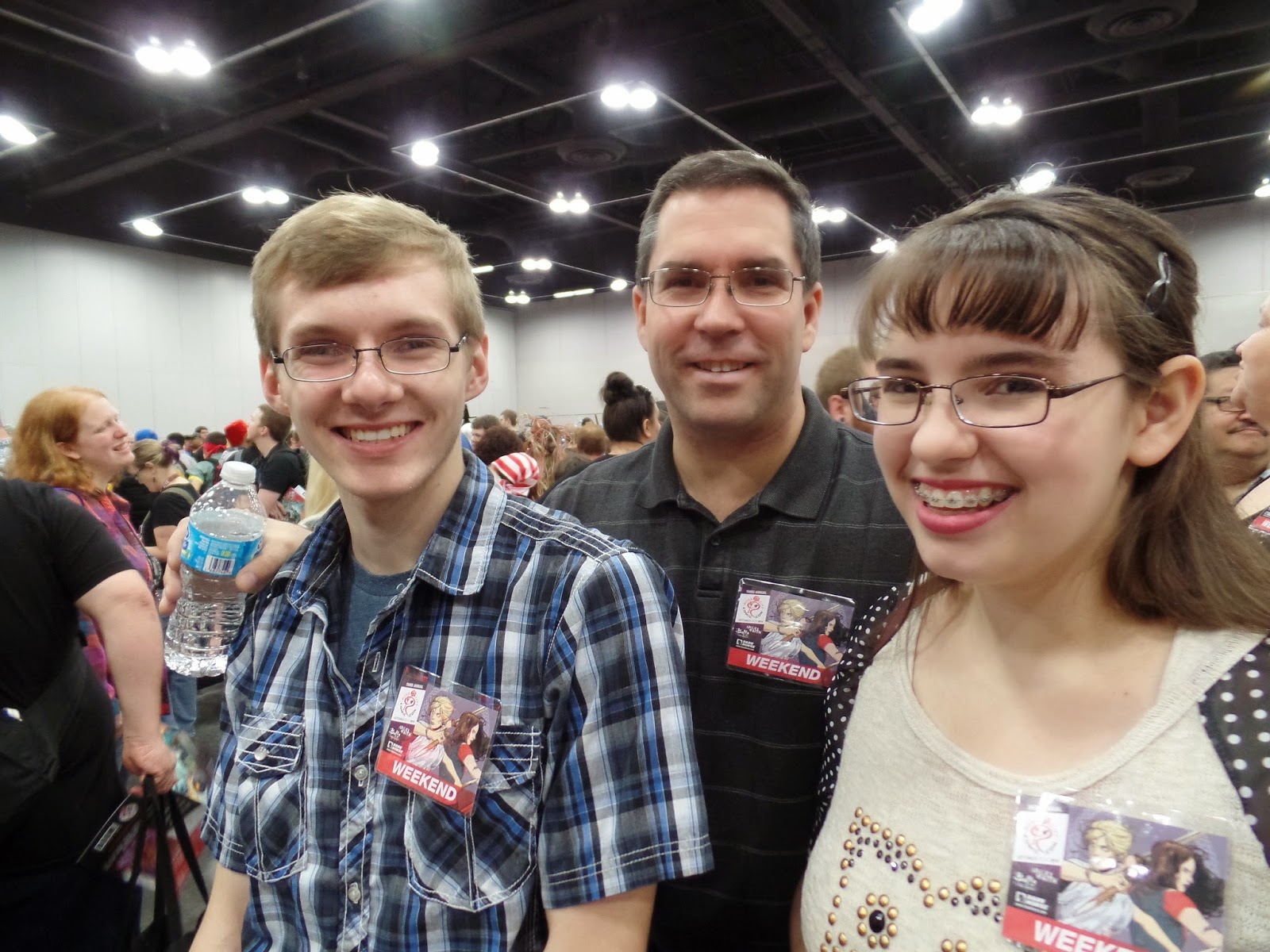 Once the floor was open we popped in to say hi to my sister who is a vendor at Conic Con every year. She runs Amlowi's Hat Shop and sells her awesome sci-fi/pop culture themed crocheted hats. Then it was time to head right over to the various panels of the day.

I just love this pendulum in the convention center, it really is beautiful and sort of feels a little bit space age which adds to the comic con ambiance! 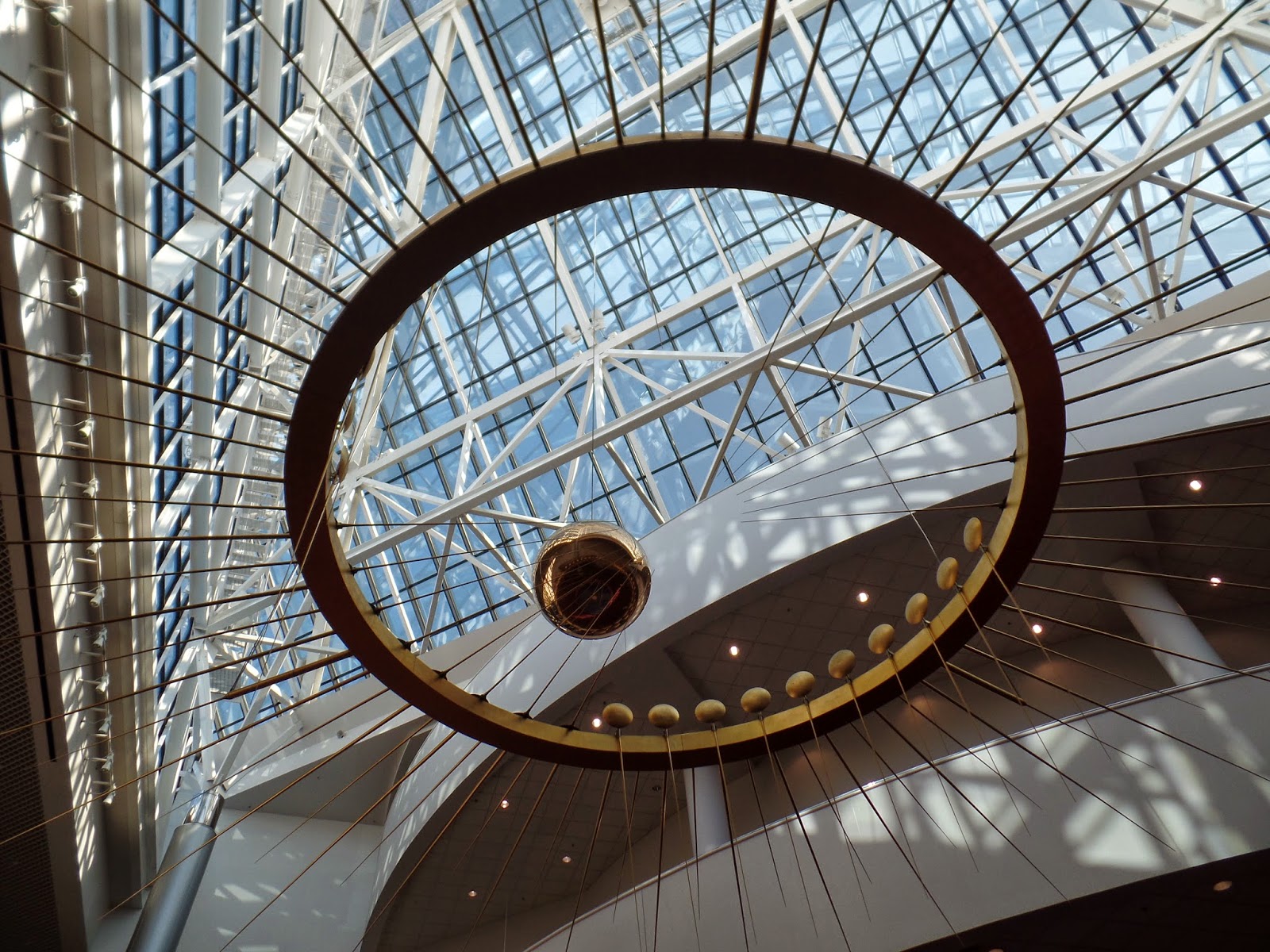 Our first panel of the day was Gigi Edgley. She was an actress on Farscape which I have never seen. I always think it is interesting to listen to all of the various panelists give their talks and answer questions, and it turns out she was in two programs that I used to watch back in the 90's Beastmaster and The Lost World, when I found that out I was more excited, now I'll have to pull out my old DVDs and re-watch them. She also hosts Jim Henson's Creature Shop Challenge which sounds interesting. She had a great energy and a terrific accent and seemed like such a genuinely friendly person, I look forward to watching her shows in the future. 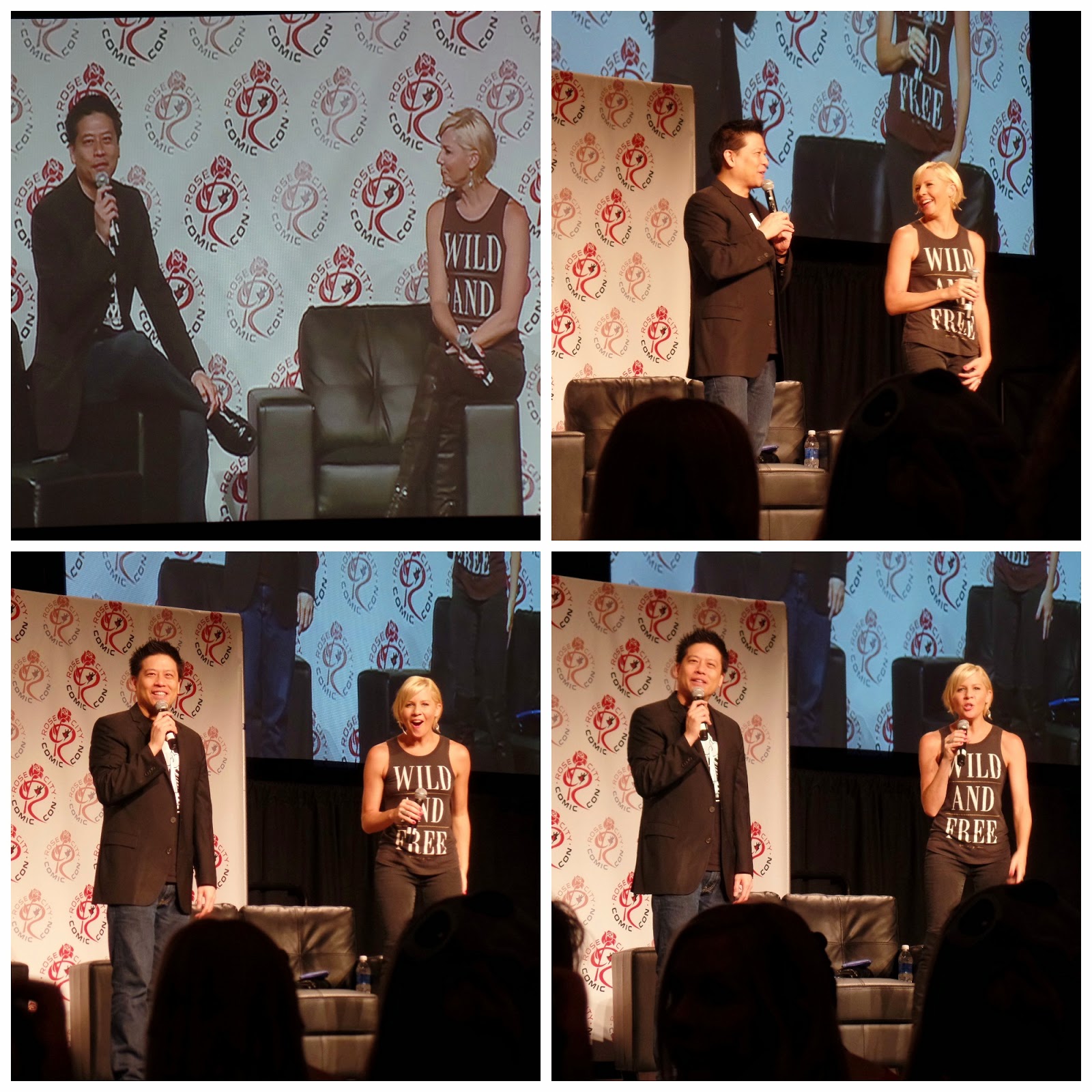 The next panel was the highlight of my weekend, and one of the main reasons I was so eager to attend this year, Wil Wheaton was speaking! Now, I have been watching Wil Wheaton since I was a teen way back in the late 80's, I loved Stand By Me, and most of all I loved his role as Wesley Crusher on Star Trek The Next Generation. I was a huge Trekky back in the day and never missed an episode, in fact I would tape the episodes on VHS so I could re-watch them! I also enjoy seeing him on the Big Bang Theory as well as the other multiple projects he has done. He is also a very good writer and earlier this year I read Just A Geek by Wil Wheaton and really enjoyed it, so I was of course excited to hear him speak. The whole family enjoyed his panel, he had such great things to say, that's what I love about panels it really gives you the opportunity to hear from really interesting people who have a different perspective on life. One of Wil Wheaton's quotes was "Never sacrifice the joy of playing in pursuit of winning." I loved that. If you ever get the chance to hear him speak, definitely do so! :) 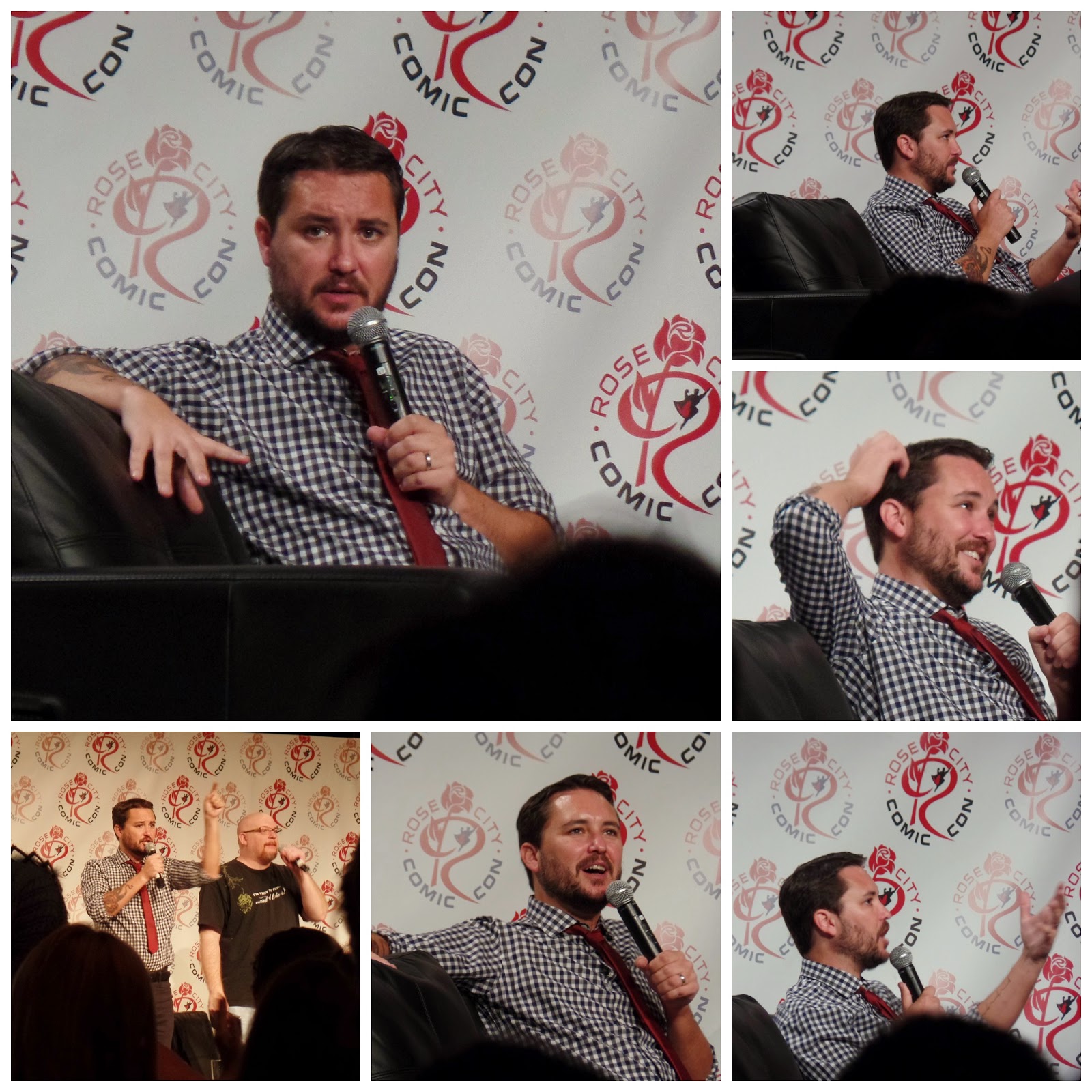 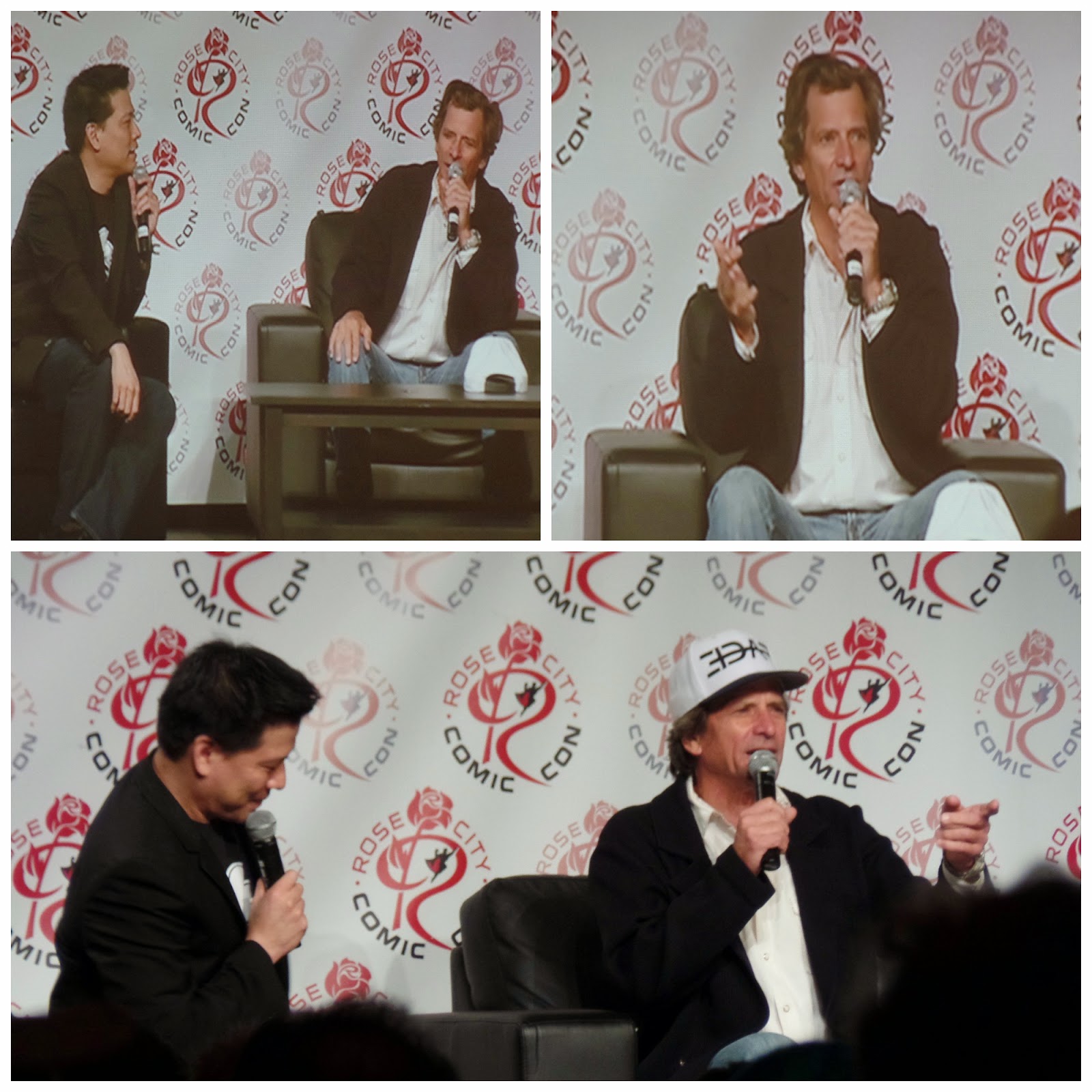 We left the panel room and lined up to get a family photo with Wil Wheaton, it was fun meeting him in person, and I love our photo, this will definitely go in our scrapbook! 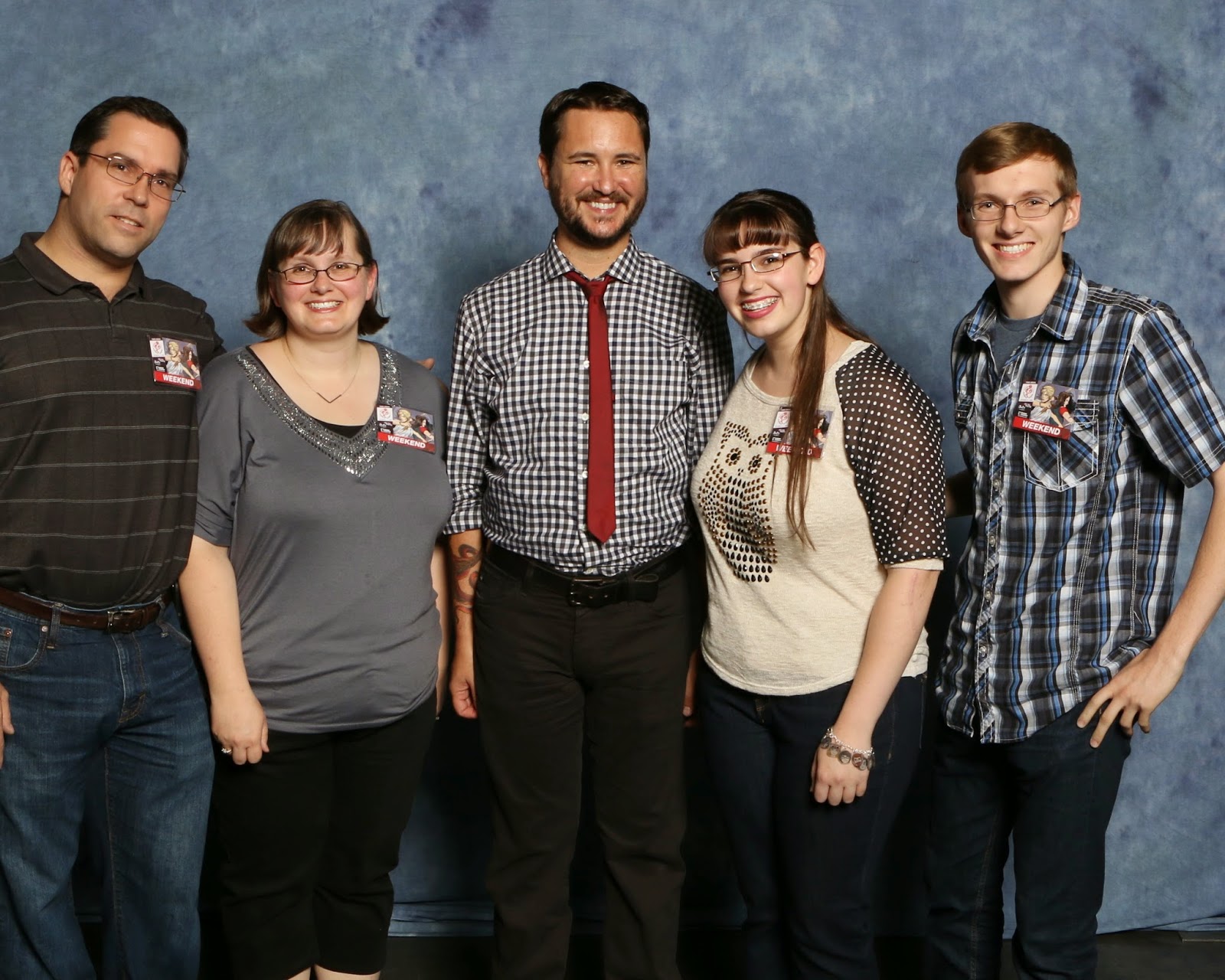 After pictures it was a bit of a race to get back in time to see the last big panel of the day- Sean Astin from the Goonies! I love the Goonies, and of course also enjoyed Sean Astin in Lord of the Rings, so I was glad when the line to get in his panel moved along nicely and we made it in. His panel was fun, Garrett Wang from Star Trek Voyager moderated the panel and did a wonderful job. Sean Astin seems like a fun and friendly guy, we were all sworn in as Goonies. :) A couple of years ago we were able to visit the Goonies house in Astoria while we were at the beach, and every year when we are at the beach we watch The Goonies, its our beach movie, so seeing this panel was a real treat! 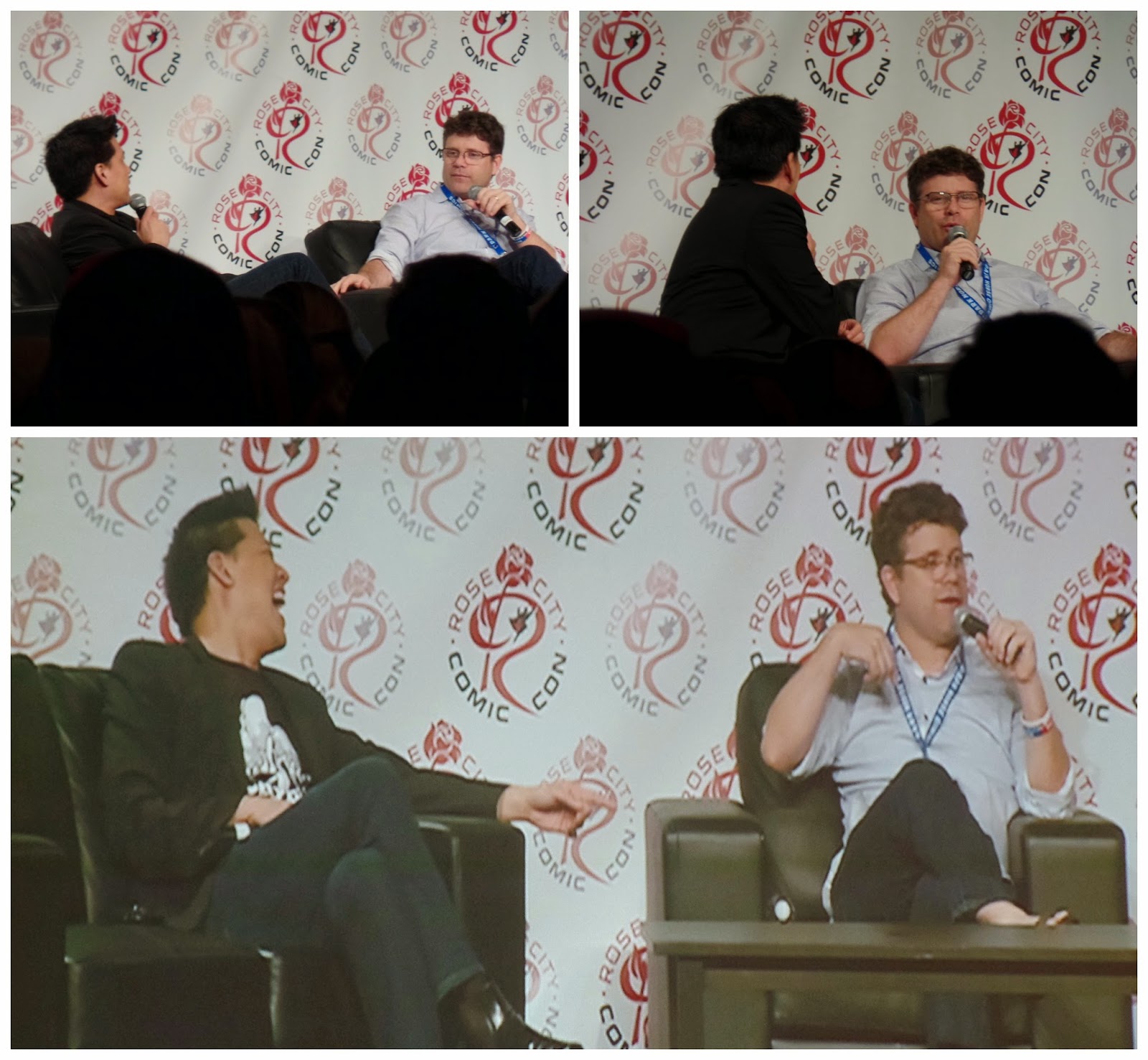 At the end of this panel we were all a bit tired and hungry, so we hung out in the hallway and ate a late lunch. We saw a ton of terrific cosplay, people are so amazingly creative with their costumes! 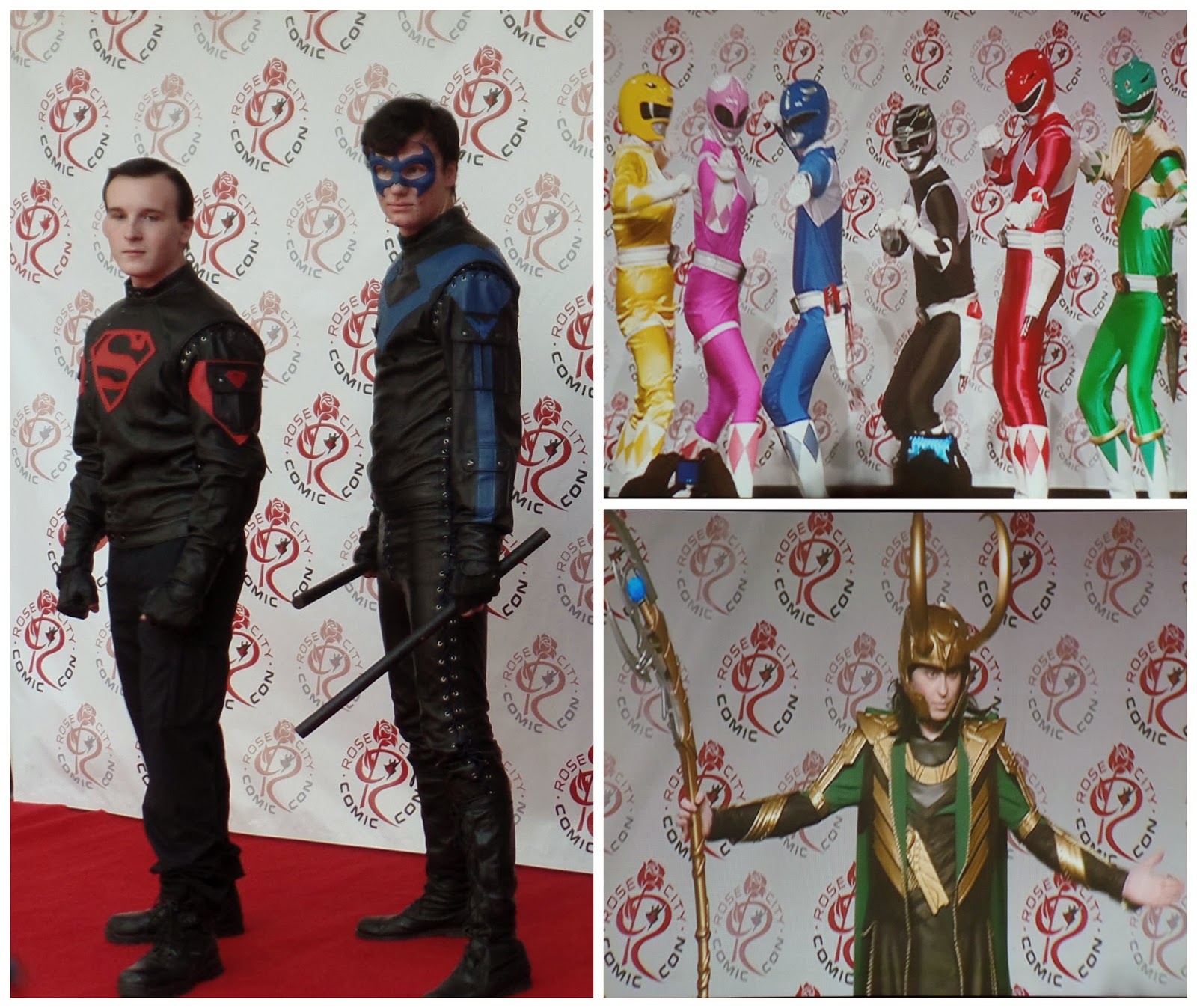 This was one of my favorite costumed groups from the 1980's sci-fi parody Spaceballs, another show I grew up watching. :) 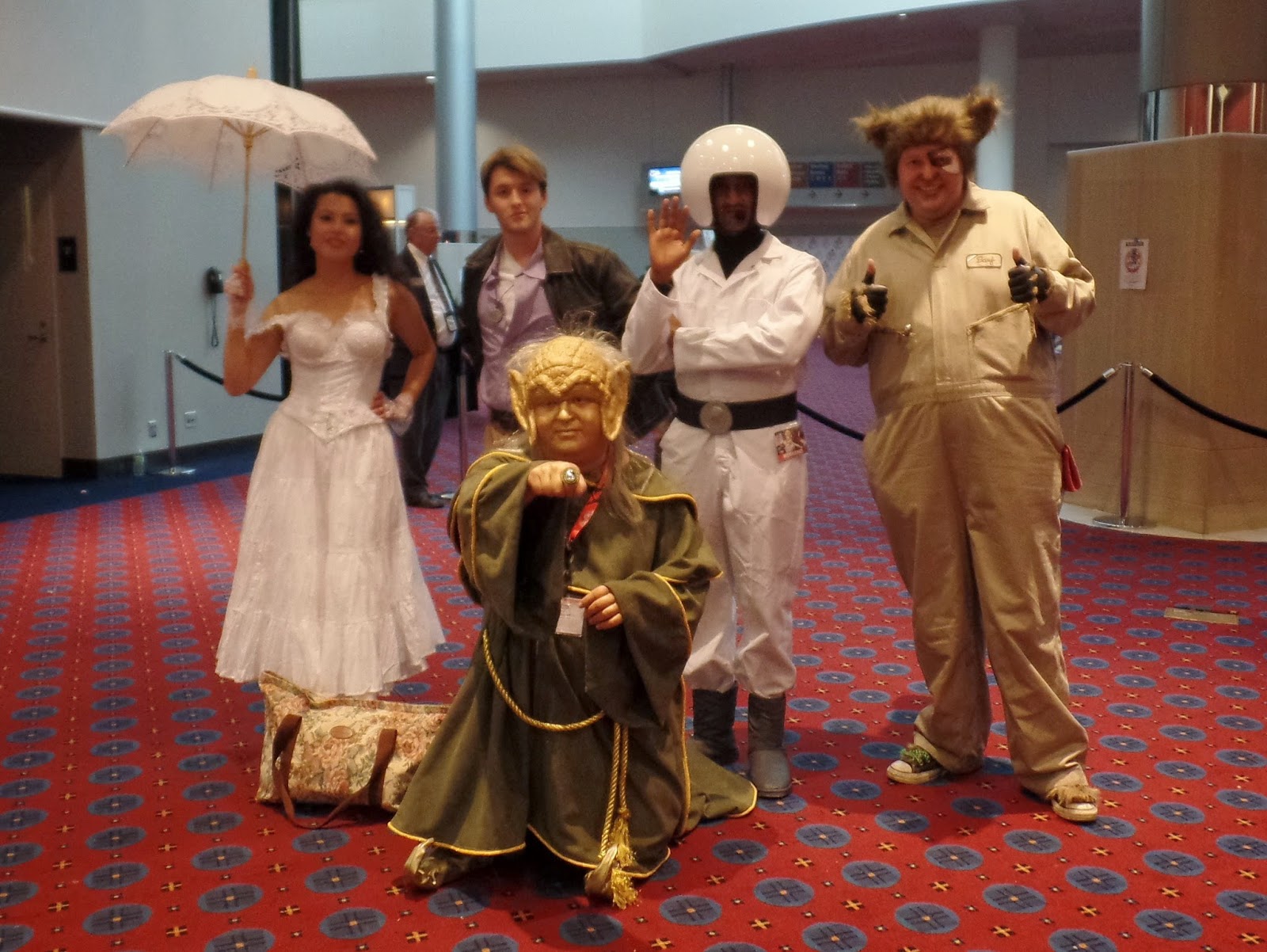 We have never had the energy to stay for the Cosplay contest, and we almost didn't this year either, but we decided to just stay up late and stay for the entire Cosplay contest. I never really knew much about Cosplay until the last few years, I recently watched a couple of episodes of Heroes of Cosplay. I was excited to find out that Oregon's own Jesse Lagers was going to be a judge, he was a contestant on Heroes of Cosplay. All of the contestants put so much effort and time into their outfits, the detail work was amazing! We were all glad we stayed! 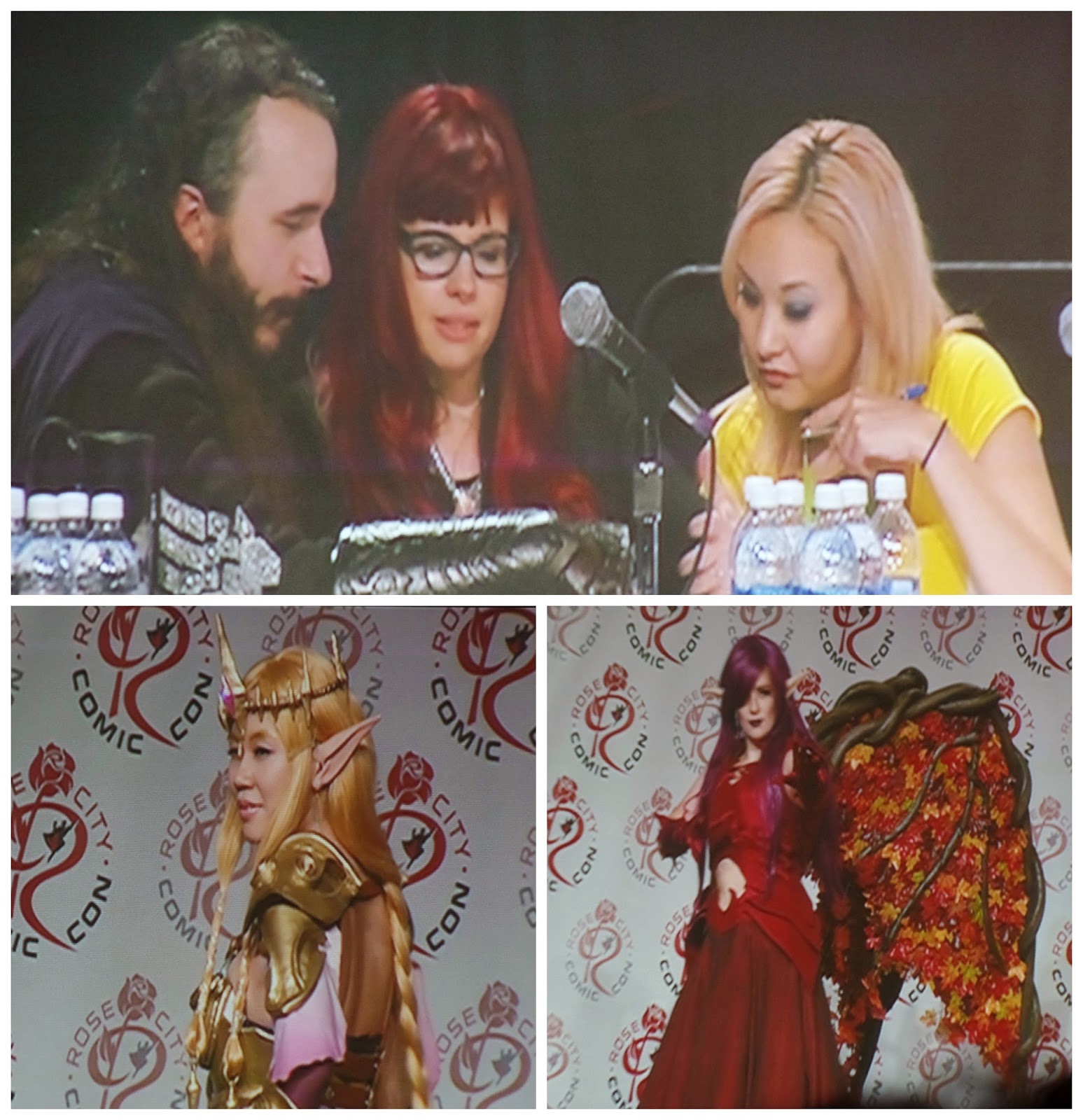 After the contest was over we drove home for the night, and got right to sleep so we would be up in time for church and then ready to head back to the Convention center for day two. When we arrived on Sunday I knew I only had one more opportunity to get Wil Wheaton's autograph, so we all hopped in his line and were all able to meet Wil Wheaton and have him sign some pictures. I chose one of him from back in Star Trek and one of him now. Sarah was happy to learn he was a fellow left handed person, and Joe got some advice on what books would be good to read on developing writing skills. 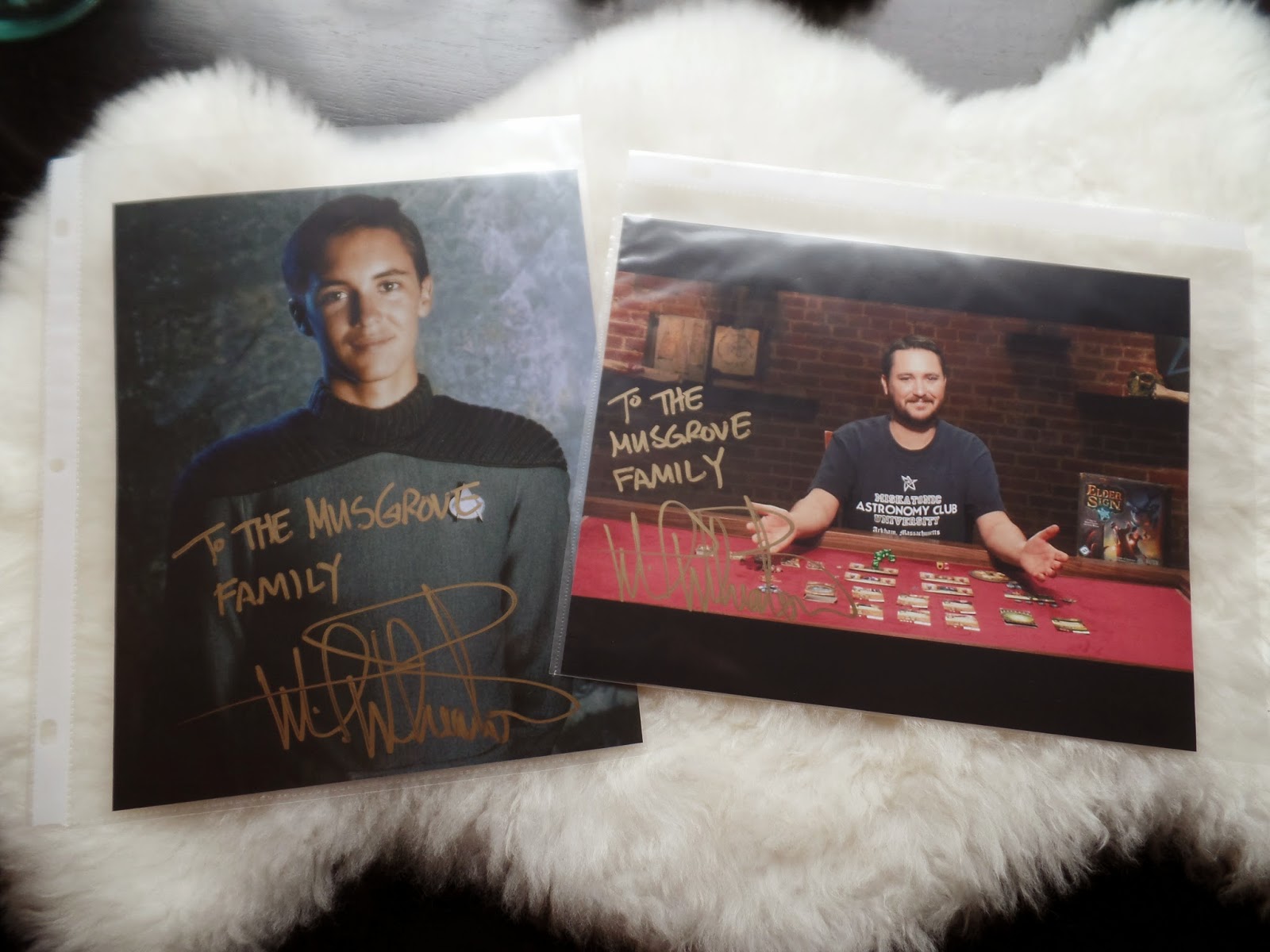 After getting Wil Wheaton's autograph we were still in the celebrity signing area and spotted the actor from Buffy the Vampire Slayer, Nicholas Brendon who plays Xander. Sarah, Joe's Girlfriend, and her little sister all watch Buffy and were pretty excited to see him. So we decided to go ahead and get his signature as well so they could meet him up close. They were a bit nervous but Nicholas Brendon was so friendly, and instead of making them share one autograph (which we would have had to do because you have to pay for each signature and they are a little spendy) he gave them each their own, which was super amazing of him, and the girls were all very happy. Next time he comes to town I would love to see his panel as well, he seemed like a genuinely nice person. This definitely made their day! 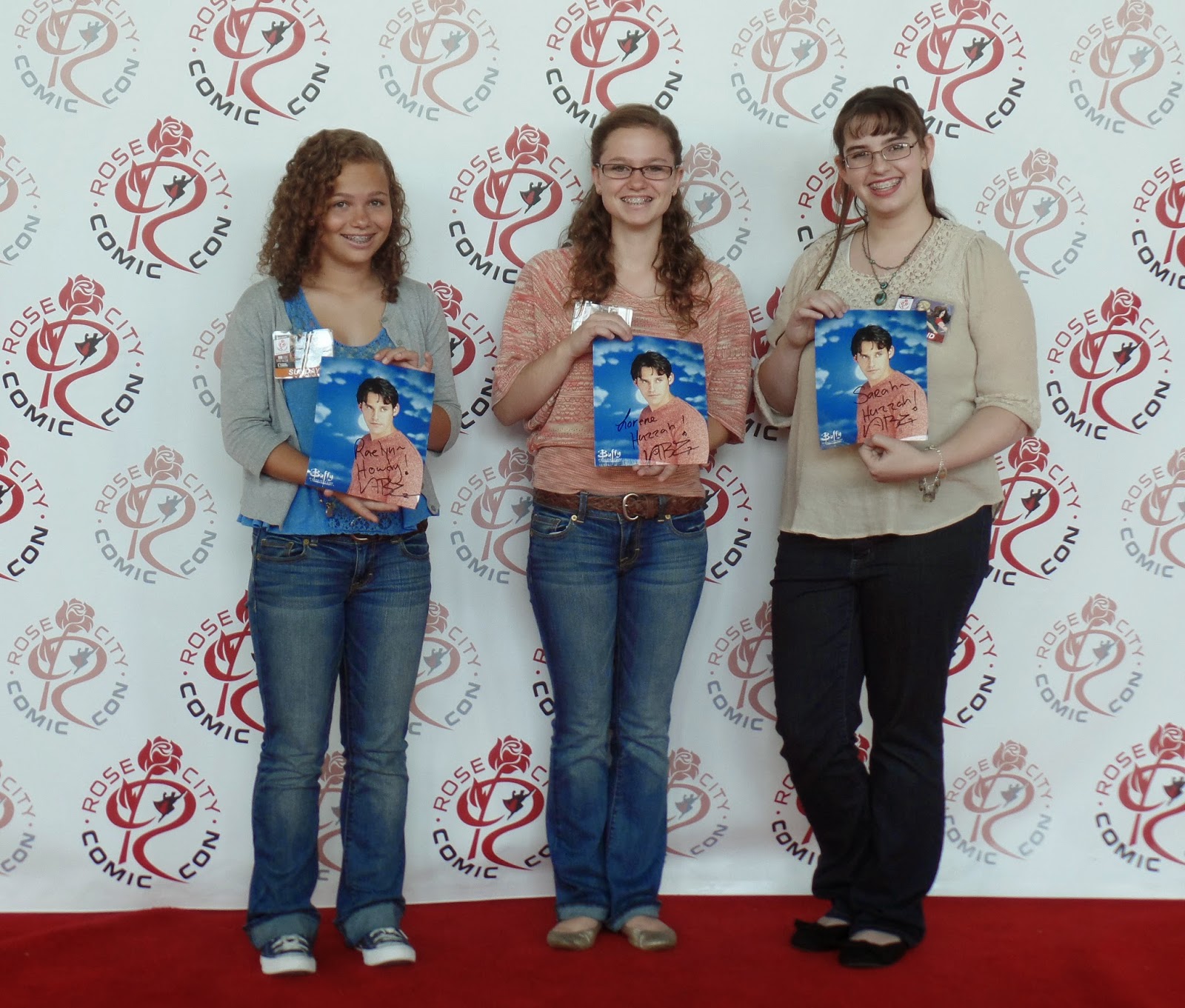 Here are all the kids, Sunday we brought Joe's girlfriend and her little sister along so they could experience their first comic-con. This is definitely a fun way to spend the day as a family, there is a lot to do and see, and we all enjoy it every year! 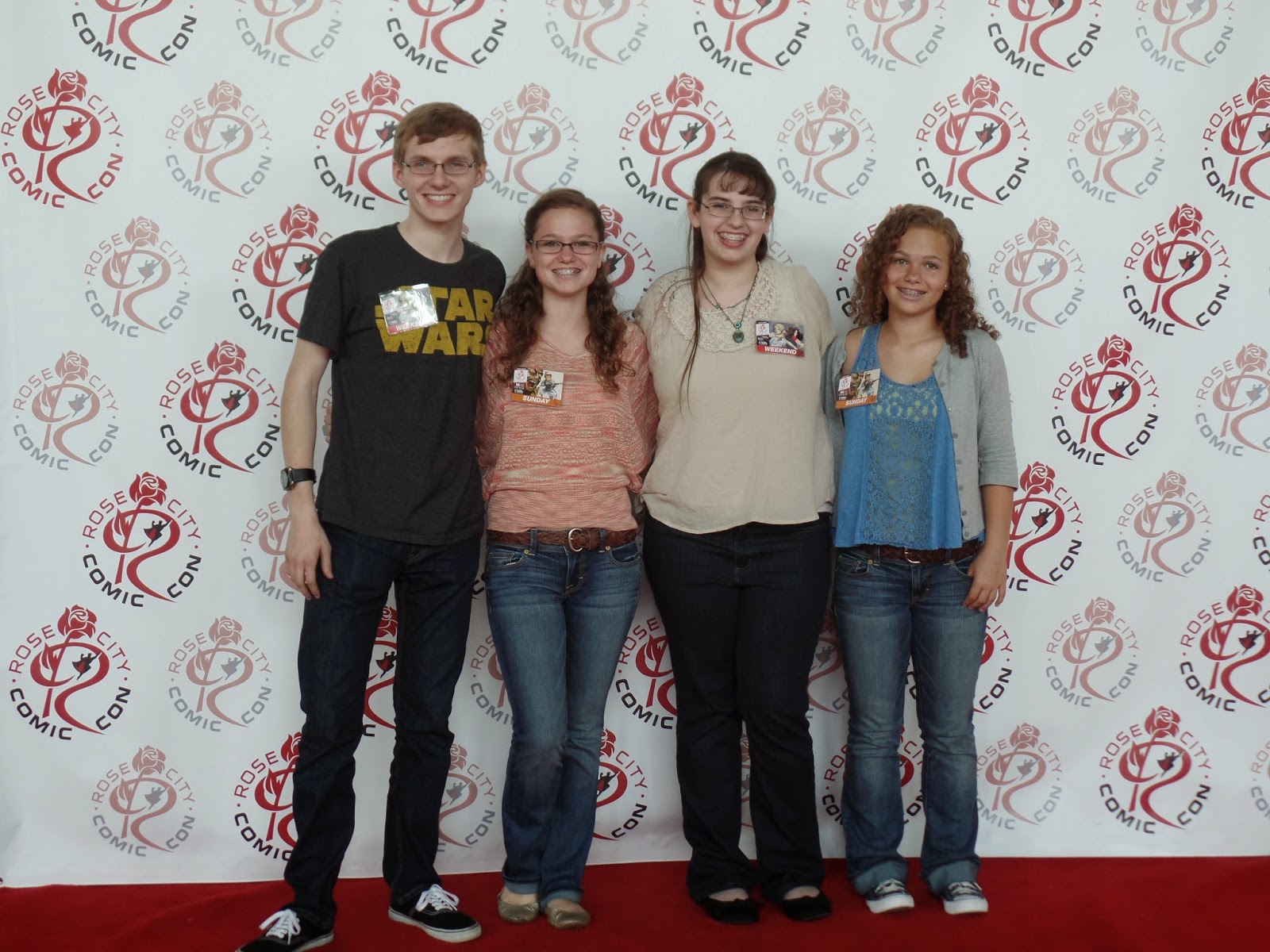 We decided to attend one last panel, this time it was Ernie Hudson's who played one of the original Ghostbusters, Winston. It is always so interesting to hear about the filming of these classic movies I grew up watching, and what it was like working with Dan Aykroyd and Bill Murray and what not. Also a bit about the role of African American's in film which was interesting as well. 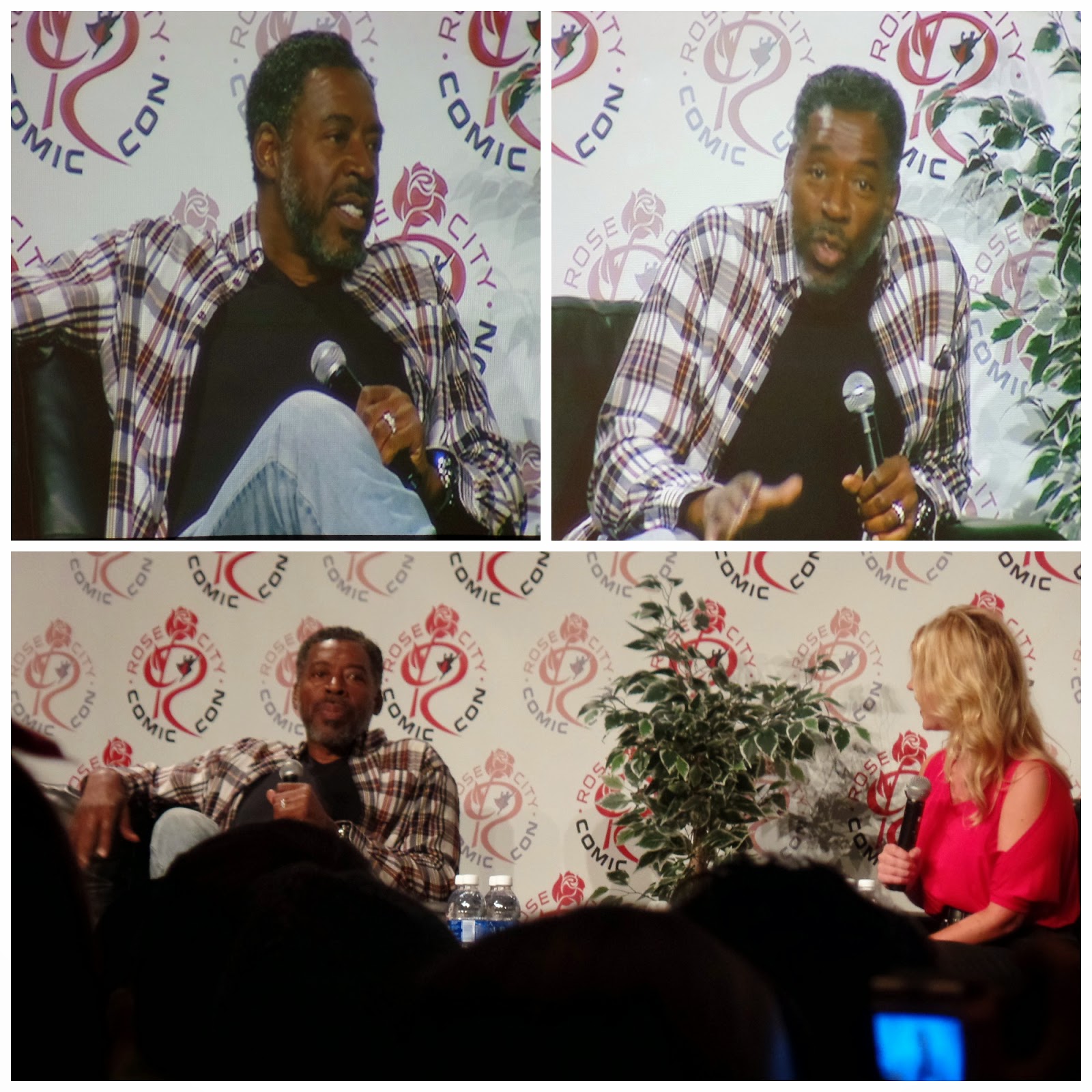 After the panel we spent some time walking around the vendors and artists, we took pictures by these reproductions of the Bat Mobile and the Back to the Future DeLorean. 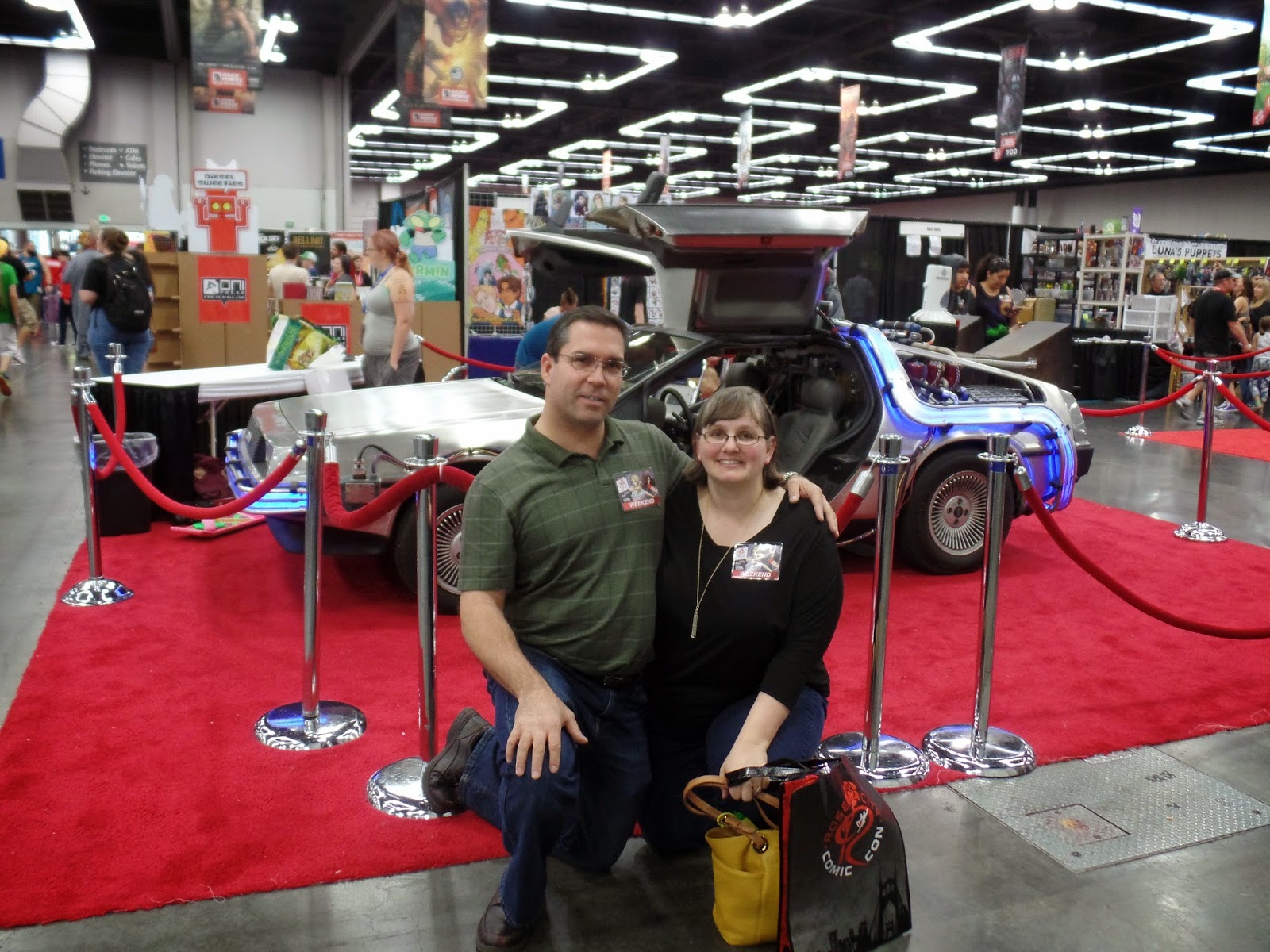 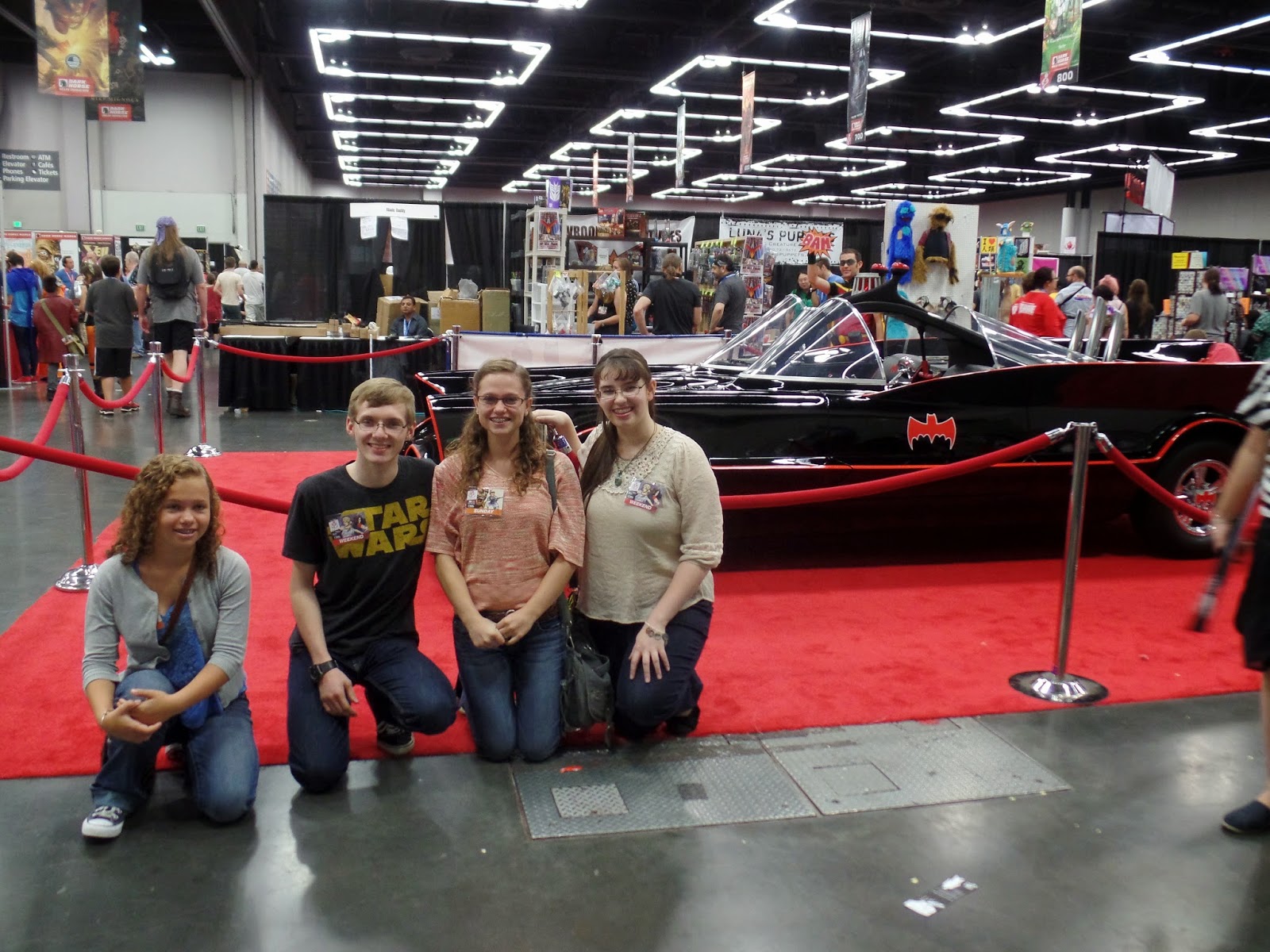 I love visiting the artists area, there are some incredibly talented artists there, I kept walking by this book and this artists booth and his pictures were so cute it would catch my eye every time. I happen to be a big fan of Asian Kawaii style cute art, and his art was just speaking to me, so in the end I decided to buy his book, which the artist, ENFU, signed and embossed for me. I look forward to looking through this more. :) 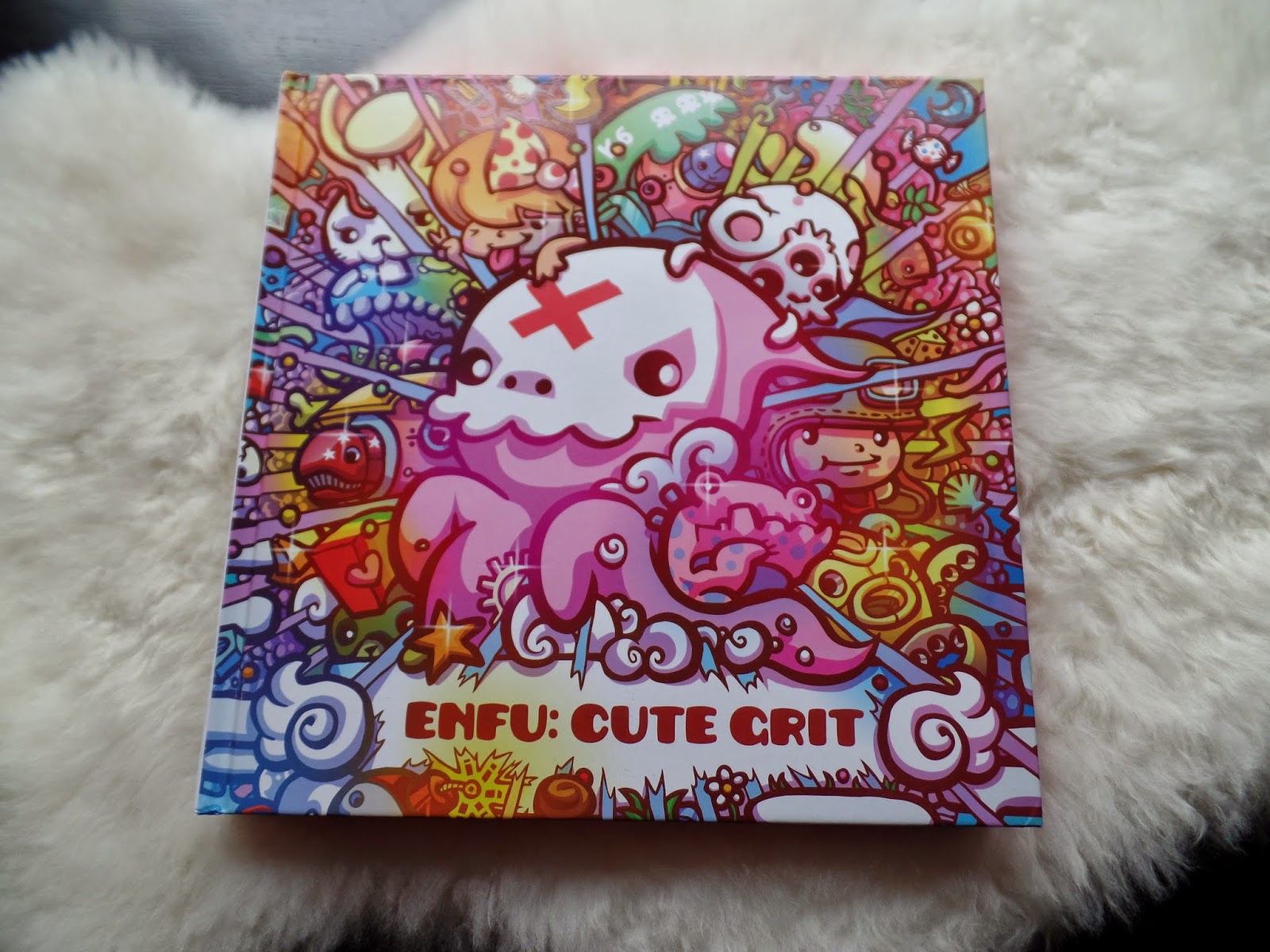 Joe was able to get two signed Spider-man prints by one of the original Spider-man artists, which was exciting for Joe since he has been a Spidey fan since he was a little boy. He also found some Spiderman Comics for his collection. This past week Joe turned 18, so in keeping with our Comic Book themed weekend I got him a couple more Spider-man themed books which he enjoyed. 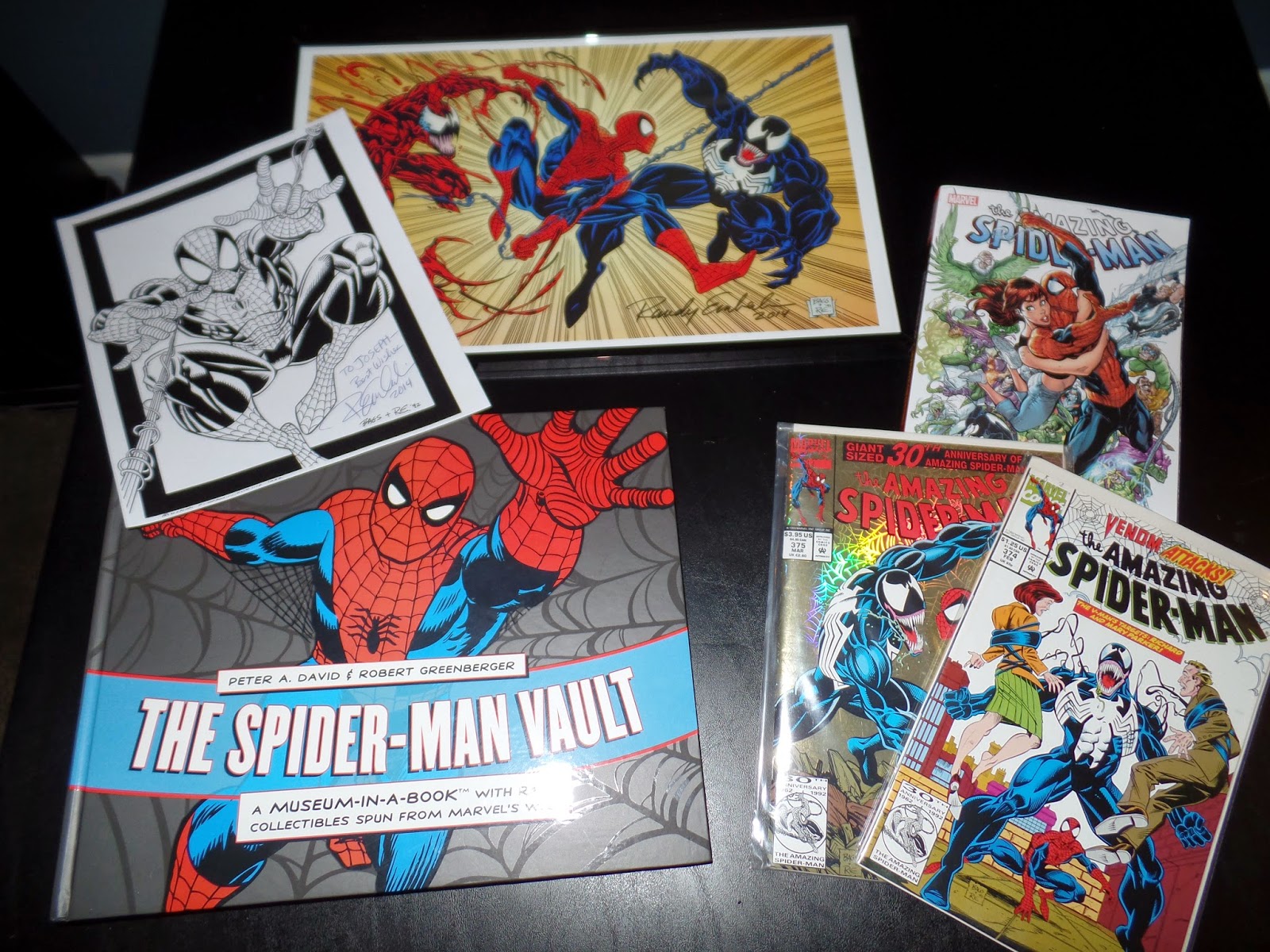 I also attempted to make a Spider-man emblem birthday cake, along with some cute nerdy themed cupcakes. All of my children are now officially adults so I figured I had to get in one last youthful cake. Happy Birthday Joe! We had a fun weekend at Rose City Comic Con and a very nice birthday this week for Joe. 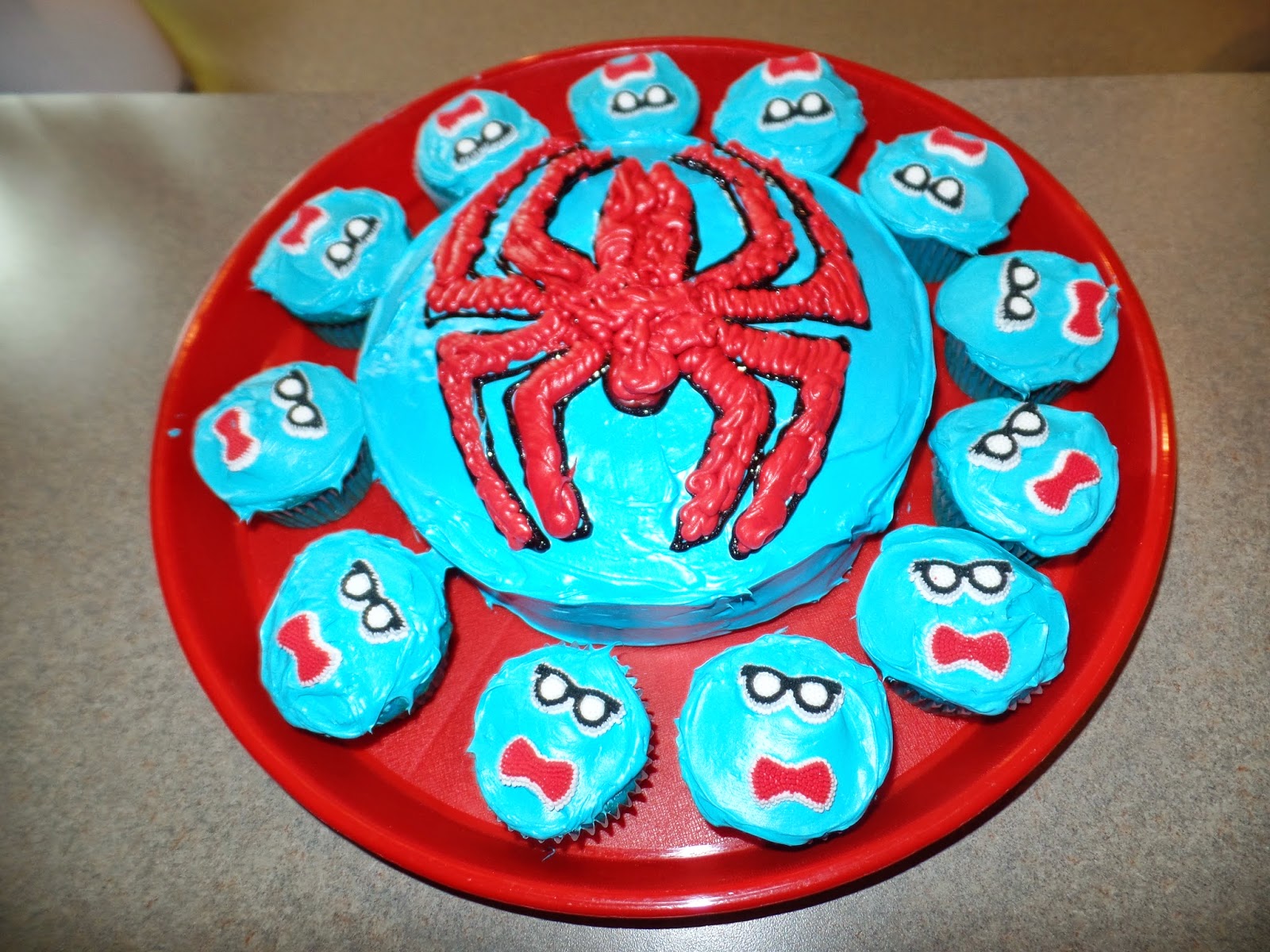 If you live near Portland, I would highly recommend Rose City Comic Con, there are fun activities for both older and younger children making it a fun weekend activity for families, although it is crowded everyone is very friendly, and everyone has a fun time. I am already eager to see the line up for next years comic con,what a fun, fun event!

Posted by April's Homemaking at 6:07 PM