January is nearly half way through, and I have been keeping very busy with various organization projects around the house.   It seams as if every drawer, cupboard, nook and cranny needs attention, so I am getting a jump start on spring cleaning by making my way through our home getting each space back in order.

The weather has been cold and wet, and is often gray, thankfully the sun pops out every now and again, which is so energizing.  With the weather being cold lately, the birds have been very present at the bird feeders, I love watching them flit and hop around the backyard, they keep me (and my dogs) entertained. 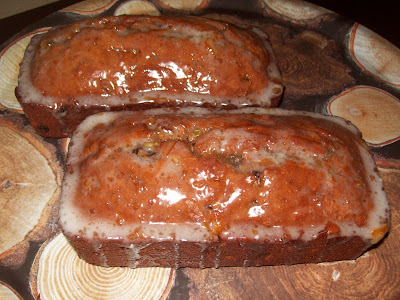 Last week I felt a little baking was in order.  I love experimenting with quick breads, they are easy to whip up and perfect for an afternoon snack.  I was inspired by an old recipe in a Celtic cookbook I have, to try an orange marmalade tea bread.  I was experimenting with the recipe as I didn't have all of the original ingredients, my first attempt produced a far too dense loaf, so I decided to try one more time, tweaked the recipe a little more, and the second batch turned out moist and delicious. Here is my recipe for Marmalade Raisin Tea Bread.

In a saucepan bring water to a boil. Remove from heat and brew tea bag in water for a little over a minute until a nice black tea has been brewed.  Remove tea bag.  Bring tea back to a low boil and add one cup of raisins.  Remove from heat and let the raisins sit in the hot tea water for ten minutes to plump up, and cool down.  After ten minutes stir in 1 cup of brown sugar, then four rounded tablespoons of marmalade.  Stir until combined, then set aside.  In a mixing bowl add four cups of flour, baking powder, baking soda, and cinnamon,  stir to incorporate, then add sugar and raisin tea mixture, and one egg, milk and oil.  Mix until wet and dry ingredients have been mixed and all flour has been incorporated into the dough, but careful to not over mix, quick breads turn out better when not overly worked. Transfer dough into two well greased loaf pans, and bake at 350 F. for about an hour.

Remove bread from over and let it cool on a cooling rack.   After about ten minutes make the glaze.

Heat 1/8 cup water to low boil (I put mine in the microwave for 20 seconds), add 3 rounded tablespoons of marmalade, stir until mixed, and jam has melted into the water to form a thinner mixture. Then add to a bowl with one cup of powdered sugar mix (use more if needed) until glaze is smooth.  Drizzle over bread.  Let bread cool, then slice it up and serve for afternoon tea or coffee or for an after school snack, it is also good toasted with a little butter for breakfast. 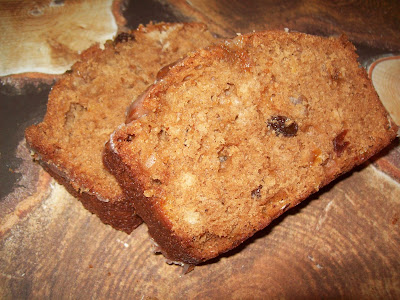 I would suggest using a good brand of orange marmalade, by my second batch of glaze I had used up my good jar of marmalade and had to use and off brand that I had left in the fridge that had a lot less orange peel, so the orange flavor wasn't as strong, if you run into this situation, you could also add some orange zest to punch up the orange flavor.

I am looking forward to a nice productive week, we have started to get a few snow flurries and the weather has gotten chilly.  A big pot of classic chicken soup is on the stove, the sniffles have started to invade our home, and I am hoping to keep them at bay!

Hope everyone is having a nice Monday.  I have been squeezing in fairy tale crafting between my organizing chores and hope to have the next post up soon. :)

Posted by April's Homemaking at 3:42 PM